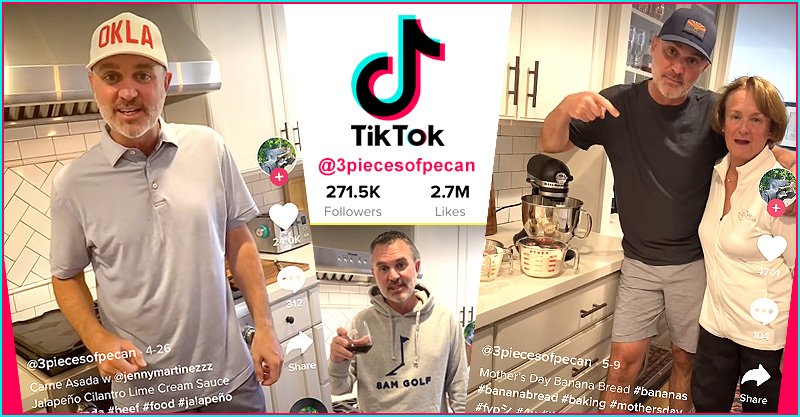 Next week will be a special one for the extended Cozby family. Cary Cozby, with his son Banks on the bag, will play in the 2021 KitchenAid Senior PGA Championship. It doesn’t get much sweeter than that for the Director of Golf at Southern Hills to play on his home course with the legends of the game.

Except for this. In the KitchenAid Fairway Club, located in the Championship Courtyard above the 12th hole and to the right of the 13th fairway,  one of the special guest chefs giving a demonstration on Thursday afternoon (approximately 2:30) will be none other than Cary’s youngest brother Chance.

By day Chance is the executive director of the Thunderbirds, the charitable organization that runs the Waste Management Phoenix Open, in normal times the world’s most heavily attended and popular PGA Tour event.

By night, he is @3piecesofpecan, a TikTok sensation with more than 270,000 followers and 2.7 million likes on the cooking videos he and son Catcher create and post to the popular social media site.

The name comes from the three pieces of pecan that father Jerry, the legendary former head professional for 41 years at Hillcrest Country Club in Bartlesville, would use as his temperature gauge on the custom built smoker he had on his back patio in Bartlesville which now occupies the same position of prominence behind Chance’s residence in Phoenix.

“I’ve always loved to cook, whether it was helping dad with the smoking or mom with breakfast,” Chance said. “When OU was playing Florida in the bowl game last year Catcher told me we should start posting cooking videos on TikTok. I didn’t even know what it was, but he showed me some videos. I said okay, I’ll cook, you video, edit and post it.

“Well we just started making the videos of stuff that we cook and pretty soon we were getting two, three million views on certain videos. Flash forward to now and we have posted 60 different videos with more than 33 million views. Many will get 1,000 or more responses and I’ll sit down for an hour and try to respond to as many as I can.”

When Jerry passed away in August of 2020, each son received something of special significance. Cary received the Ben Hogan iron set that was framed in his office, middle son Craig the Rolex that Jerry had worn and Chance the custom built smoker.

The videos featuring ribs and brisket have been hits, but also his pasta dishes, Mexican and just about anything he cooks. Many of the recipes originated with his mother Karole, an excellent cook, and have been adapted or modified. His brother Craig is actually the most adventurous cook in the family, handy with Beef Wellington or cinnamon rolls from scratch,  but Karole and Cary report that Chance is a great cook as well.

“Chance has been cooking since he was about 10 and he’s good,” Cary said. “He would make a great omelet that Craig and I would steal and force him to make more if he wanted one.”

Chance made a salsa video that Catcher posted and reported that in the first hour it garnered more than a million views.

Chance doesn’t reveal his name to the TikTok universe and we may have just ruined that, but he always wears gear relevant to his work, whether it is from the Waste Management, his beloved OU Sooners, or even Southern Hills. He was wearing a Southern Hills hoodie in a video that caught the attention of the KitchenAid folks as they were looking to fill out the demonstration tent with popular local chefs. They asked Cary if he knew if 3piecesofpecan was a member?

“No dude, that’s my brother,” Cary told them.

“What’s amazing is I’ve had about 100 members ask me if that was someone I knew or if it was Chance,” Cary said “Who knew 100 Southern Hlls members were even familiar with TikTok.”

Chance said the massive following thus far does not have a monetary benefit but he and Catcher are going to start a small business with a logo they have created and market 3piecesofpecan merchandise.

And so if you want to learn how to smoke the perfect ribs, be in the KitchenAid tent Thursday afternoon. Tickets for the tournament can be purchased at www.srpga.com.

Note: The tournament announced this week that in accordance with updated CDC guidance, masks will not be required outdoors at the championship but will still be required when inside. All of the corporate tents, conessions and merchandise at the tournament are open air.