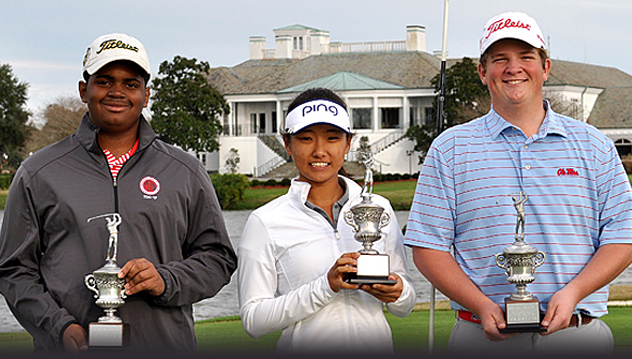 Yujeong Son of Norman fired back-to-back rounds of 69 for a 36-hole score of 138 to win the Girls division by eight strokes despite the windy conditions.

“Winning this tournament for the second year in a row means a lot to me. I love English Turn and New Orleans, so this event is a great fit for me.” Son said.

Foundation Chairman and PGA TOUR Veteran, Kelly Gibson said “Yujeong is the most impressive 15-year-old golfer I have ever seen. I have been around professional golf for thirty years and have not seen anyone of her age play golf at the level she’s playing at.”

Son was one of 16 players in the 84-player field who is instructed by Rob Noel, Golf Magazine’s Top 100 Instructors, and has a golf academy at Money Hill Golf & Country Club in Abita Springs, LA.

Runner-up honors in the Girls division went to Michaela Morard, a high school freshman from Huntsville, AL. Morard, a verbal commit to the University of Alabama, shot rounds of 70-76 (146). Third place in this division went to Hannah Levi of D’Iberville, MS with a score of 151. Levi, who is in the Class of 2018, has committed to play at Mississippi State University.

It was the second prestigious victory in as many weeks for Son, who also recently captured the Dixie Amateur by five shots. The 15-year-old defending Class 6A state champion and three-time defending Women’s Oklahoma Golf Association state amateur champion is playing a national schedule this year in preparation for an eventual college or professional career.

Making the trophy presentations to the winners at the conclusion of play Thursday, along with PGA TOUR Veteran Gibson, and Foundation Executive Director Mason, were G. Charles “Chuck” Lapeyre, Sugar Bowl Committee President for 2016-17 and Dr. John Moore and Mason Moore, father and son of the late Tommy Moore, who is the namesake of the tournament. Lapeyre stated, “We are extremely proud of this event and our partnership with the Kelly Gibson Foundation to promote amateur athletics in the New Orleans community.”