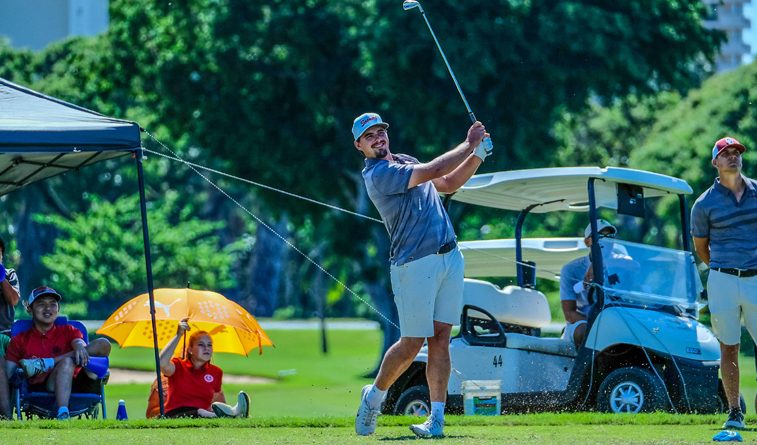 The No. 11 Oklahoma men’s golf team finished its fall schedule on a strong note with a record-breaking round on the final day of the Ka’anapali Collegiate Classic. OU posted a 20-under 264 at the par-71, 6,700-yard Ka’anapali Golf Course on Sunday to set the record for the program’s lowest round by three strokes.

OU finished the event in third place with a three-round score of 817 (-35), just two strokes shy of matching the record for the lowest 54-hole total in school history. California won the tournament with a 54-hole 805 (-47), while North Florida placed second at 816 (-36).

OU was led by career-best performances from redshirt junior Quade Cummins and junior Riley Casey. Cummins earned sole possession of second place with a three-day score of 15-under 198. The Weatherford, Okla., native carded a career-low 6-under 65 during Sunday’s final round to pick up his best finish of his collegiate career. Cummins’ 54-hole 198 is tied for the third-best three-round score in program history.

Casey posted a 64 during the final round to bring his three-day total to 200, claiming fourth place. Casey’s round of 64 is tied for the seventh-lowest 18-hole score in school history. The junior carded six birdies during Sunday’s action and also recorded an eagle on hole No. 1. Casey’s 54-hole total also set a career low.

Freshman Logan McAllister turned in his best round of the weekend, recording a 68 to finish tied for 33rd place at 210. Junior Garett Reband posted a 67 in the third round and logged five birdies. Reband shared 42nd place with a three-day total of 211.

Senior Blaine Hale tied for 53rd place at 214, posting a 72 during Sunday’s final round. Competing as an individual, freshman Patrick Welch wrapped up his first collegiate event with a 67 in the final round. Welch earned a top-10 finish, tying for sixth place at 203. The Providence, R.I., native picked up six birdies on Sunday. Senior Brad Dalke also competed as an individual at the event, tying for 53rd place with a three-day total of 214. Dalke finished with a 77.