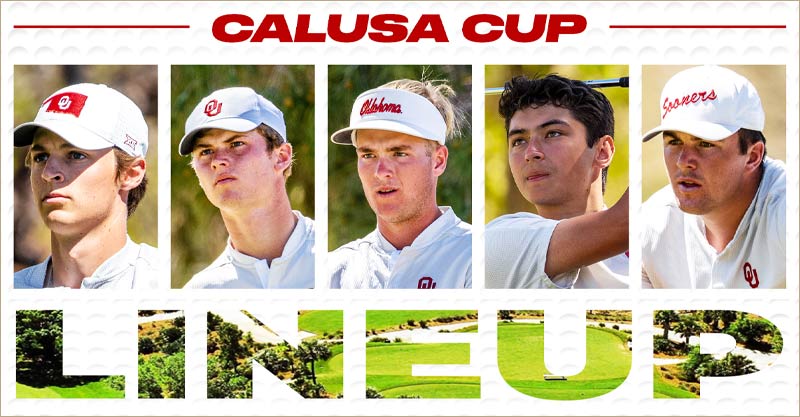 NORMAN – The Oklahoma men’s golf team collected eight birdies on the back nine in Sunday’s opening round of the Calusa Cup to sign for a 290 (+2) and grab a share of fifth after round one at the three-day, 54-hole event.

Two Sooners sit inside the top 15 on the leaderboard following 18 holes at the par-72, 7,320-yard Calusa Pines Golf Club as freshman Drew Goodman and senior Patrick Welch put themselves in the hunt at the tournament. Playing without All-American Logan McAllister, who made his pro debut this week at the PGA Tour’s Valero Texas Open, top-ranked Oklahoma (290, +2) will need to erase a 14-stroke deficit over the next two days if it wants to win its school-record fifth event of the season.
“We just had too many giveaways today for us to have a good round,” head coach Ryan Hybl said. “Calusa can make you look not very good at times around the greens and that was us today.”

True freshman Drew Goodman (T5, -3) led the way for the Sooners at Calusa Pines, the No. 3 course in Florida, where the Sooners won the team title at the 2021 event. The Norman, Okla., product was 2-under par with a clean card thru 10 before playing the rest of his round 1-under to close with a 69 (-3) and a share of fifth. The round in the 60s was Goodman’s eighth of the season, third-most on the team behind senior All-Americans Logan McAllister and Chris Gotterup.

One shot back of Goodman was All-American Patrick Welch (T14,-1) who was 4-under par without a bogey thru 16 before closing with a double bogey on 17 and a bogey on the 18th. Welch seeks to continue his strong spring as the Aliso Viejo, Calif., product has posted a T6, T16 and a medalist finish in 2022.
“Drew (Goodman) played a very solid round today,” Hybl added. “Patrick (Welch) played almost perfect golf until the end there. We’ll get better tomorrow and keep at it.”
Chris Gotterup (T26, +2) struggled early but bounced back in a big way, sinking birdies on his final two holes to move up the leaderboard.
Ben Lorenz (T33, +4) signed for a 76 and Stephen Campbell Jr. (44, +10) rounded out the Sooners’ lineup with an 82.
The 16th-ranked Florida Gators (1, -12) lead the tournament, powered by individual leader Ricky Castillo (1, -7) who eagled No. 18 on Sunday to claim the solo 18-hole lead.
Oklahoma will look to improve its standing in Monday’s second round. Hybl’s team tees off at 11:45 a.m. CT Monday with No. 8 Georgia (4, -1) and No. 23 Purdue (T5, +2).

Live scoring for round two will be available on Golfstat.com.