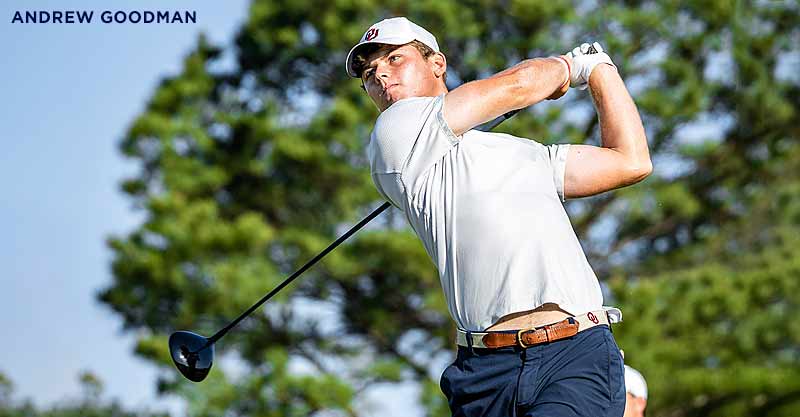 NORMAN – After 18 holes of play in the NCAA Norman Regional, the top-seeded Oklahoma men’s golf team leads the field and is 10 shots clear of the championship cut.

The Sooners, who entered the postseason as the unanimous No. 1 seed, opened their lead to nine strokes at one point before the field began to catch up on the back nine. The 54-hole regional, which serves as the qualifying event for the NCAA Championship, is hosted by the Sooners at Jimmie Austin OU Golf Club in Norman.

“That was as good of a front nine as we could’ve asked for,” head coach Ryan Hybl said. “But you’re not done until you’re done, and we didn’t do a very good job on the backside and lost some momentum. We hit a couple poor golf shots and it cost us. But there’s still a long way to go here and we know that. It’s going to be a battle all the way through, because nothing is ever easy at regionals.”

Things started fast for the Crimson and Cream on their home course as three Sooners tallied birdies on the par-4 first hole. That trend continued for Hybl’s team as Oklahoma played the front nine 14-under par behind Drew Goodman’s 6-under 30. But the Sooners struggled on the back nine, playing Nos. 10 thru 17 6-over before Goodman, Logan McAllister and Chris Gotterup all birdied the 18th to take hold of the lead entering the clubhouse.

In his NCAA debut, Goodman (T3, -5) was sensational for Oklahoma. The freshman from Norman nearly posted a clean card, but he found trouble on the 17th, where he settled for a triple-bogey. Outside of the 17th, Goodman tallied six birdies and an eagle to finish his day in a tie for third at 5-under. The Norman product’s 6-under 30 on the front gave him the solo lead at the turn as Goodman seeks his first collegiate win.

“Felt really, really good on the front,” Goodman said. “Had a couple of birdies and then a really nice eagle on No. 5, and really just felt good coming out. I’m a little bummed that I gave a couple shots away at the end, but that’s golf, and it gives and it takes away.”

Patrick Welch (T6, -3) showed why he was named an All-American two seasons ago. The senior signed for a 69 (-3) and rose as high as second on the leaderboard midway into his round. His birdie on the par-4 16th helped Oklahoma stay in front of No. 24 South Carolina, who made a late charge.

“I was with Patrick most of the day,” Hybl added. “He played really well I thought. He birdied some of the harder holes on the golf courses and probably still left a few out there. But really, all of our guys feel good and everyone talks about it and dissects it. But at the end of the day, we just have to play our game and do things our way and we’ll be fine.”

The nation’s No. 1 golfer, Chris Gotterup (T12, -2), fired a 70 (-2) in his first NCAA Regional appearance. The redshirt senior and player of the year candidate sunk three birdies and six pars on the front before a string of bogeys dropped him out of the top 10. Three more birdies over his final six holes shot him back into the red and into contention.

Stephen Campbell Jr. (T39, +2) was even thru 16 after a birdie on the par-4 16th but tallied back-to-back bogeys on his final two holes to finish his day at 2-over.

The Sooners hold a one-shot advantage over South Carolina on a crowded leaderboard but remain 10 shots clear of the championship cut. Following 54 holes of play, the regional’s top-five teams advance to the NCAA Championship at Grayhawk Golf Club, slated for May 27-June 1.

Oklahoma will tee off at 8 a.m. Tuesday with the Gamecocks and No. 18 Auburn off the first tee. Live scoring will be available via Golfstat.

Admission the to tournament is free and spectators are encouraged to attend.