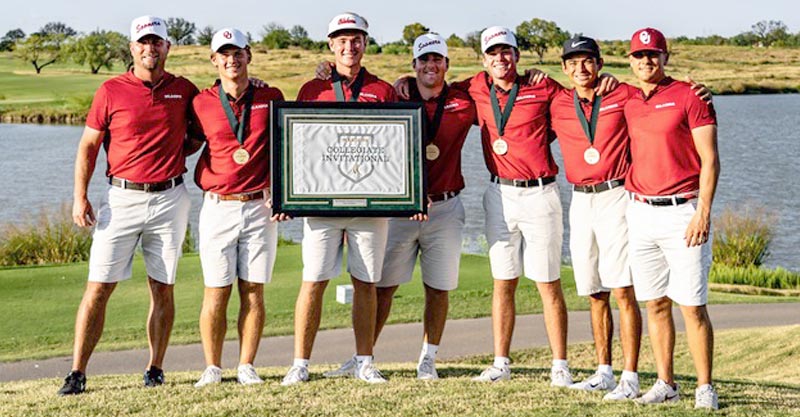 CARROLLTON, Texas — The Oklahoma men’s golf team erased a 10-shot deficit over the final 13 holes of play to win the Maridoe Collegiate Invitational, defeating No. 5 Texas on the last hole by a single stroke on Wednesday. The Sooners fired a tournament-low 281 (-7) Wednesday to complete the comeback and claim the trophy.

The win is Oklahoma’s (1st, -3) 44th all-time and the 30th of the Ryan Hybl era, which started in 2009. Hybl’s 30 wins are the most in program history and tied for the 15th most in NCAA history. The seventh-ranked Sooners’ 17-win stretch since the 2016-17 season marks the most successful run in program history.

“We’re young, hungry and have a lot to prove,” Hybl said following the win. “They’re working so hard and we know it’s early in the year, but we really love what we’re seeing out of our guys right now. I’m proud of our guys for fighting until the finish today.”

The par-72, 7,351-yard Maridoe Golf Club proved once again to be one of the toughest tests in college golf, as only the Sooners and Longhorns finished under par. The course’s final four holes played as the week’s fourth, fifth, eighth and 12th-toughest holes, all forcing players over par. But they were no match for Oklahoma, who played them 3-under on Wednesday to win the tournament”

For us to play those last four holes at 3-under was obviously the difference this week,” Hybl added. “Huge birdies from our three seniors in McAllister, Gotterup and Welch, then the birdie on No. 15 from a freshman in Goodman – that was what helped us to this win.”

On Wednesday, Chris Gotterup (T3, -5) went out last for Oklahoma and sunk the tournament-winning par putt on the 18th green. The redshirt senior fired rounds of 70 and 72 on Monday and Tuesday, respectively, but his 68 (-4) in Wednesday’s final round was enough to power the Sooners past the Longhorns. The third-place finish marks the 10th top-five finish of his career, but the first as a Sooner after transferring from Rutgers.

“It’s amazing to get my first team win here at OU,” Gotterup said. “It came early in the year and hopefully the wins continue to come often. We knew we had what it took to get it done and to go out and get it done was an awesome feeling. This is exactly why I came to OU – the opportunity to compete against the best in the country on a national stage is amazing.”

A trio of Sooners in Drew Goodman, Patrick Welch and Logan McAllister were vital for the Crimson and Cream Wednesday, firing 1-under 71s.

Following a T6 finish in his college debut at the Carmel Cup, freshman Drew Goodman (T11, +1) was instrumental in Oklahoma’s victory this week. The Norman, Okla., product birdied the 15th with a long putt and then saved an up-and-down on 18 to keep the Sooners tied with the final group on the 18th tee. His under-par round Wednesday gave him a share of 11th as he is now the only player on the OU roster with a pair of top-15 finishes to start their college career.

Following an opening-round 74 Monday, senior Patrick Welch (T11, +1) rallied over the final 36 holes, posting a 72 and 71 to close his week at Maridoe to grab a piece of 11th. The Aliso Viejo, Calif., product now has notched 14 top-20 finishes in just 27 events. Welch’s birdie on the 18th hole, paired with a Texas bogey, closed a two-shot gap and gave the Sooners a share of the lead that they wouldn’t surrender.

All-American Logan McAllister sunk four birdies Wednesday, but none were more significant than his 5-footer on the par-3 15th, which closed an OU run that erased a 10-shot deficit. His 71 in the final round moved him from 23rd into 18th, securing the 12th top-20 finish of his career. More impressively, all top-20 placements of his career have come in the last 17 events, dating back to his sophomore season.

Redshirt freshman Stephen Campbell Jr. shined on the tough back nine at Maridoe Wednesday, sinking a birdie on No. 10 followed by eight pars to finish his week in a tie for 28th.

“It feels great to play an individual role in the win, but without all the boys stepping up we wouldn’t have gotten it done,” Gotterup added. “We’ll enjoy this win, but know we have a long way to go this season. We’ll get back to work as soon as we get back to Norman.”

The Sooners now shift their focus to the Nike Collegiate Invitational at Colonial Country Club in Fort Worth, Texas, slated for Oct. 4-5. At the 2020 event, Oklahoma earned its first team win of the season, holding off the Longhorns by six shots. Individually, McAllister is the back-to-back champion of the event and will seek to defend his title.