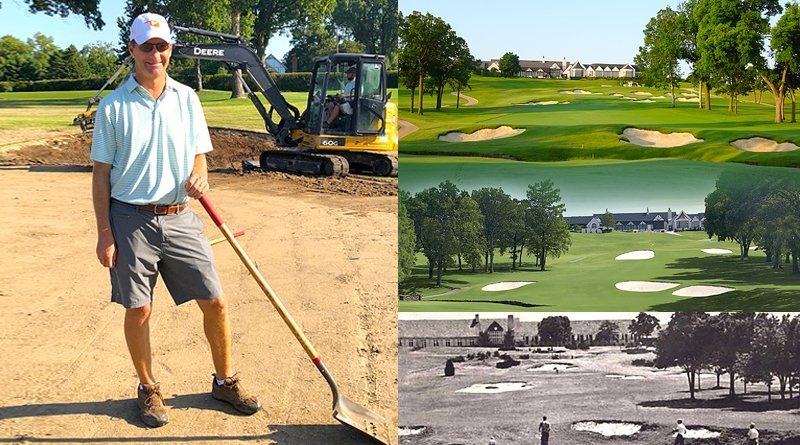 Photo: Gil Hanse, left, and the 18th hole at Southern Hills as it appeared in the 1940s at bottom, until recently in middle and today at the top with the original bunker style restored.

Southern Hills Country Club in Tulsa celebrated the restoration and reopening of its golf course Thursday with a day of golf and parties capped by a slide show and question and answer session with architect Gil Hanse and Golf Channel Morning Drive personality Gary Williams.

In the far-ranging Q&A, Hanse talked passionately about the great respect he had come to have for orginal architect Perry Maxwell and the particular work he had done at Southern Hills. He also lauded all involved, particularly Southern Hills superintendent Russ Myers, with whom he had previously worked on a restoration of Los Angeles Country Club’s North Course and South Course.

Before the official session was held in front of a packed ballroom of more than 500 members and dignitaries, Hanse sat down with Golf Oklahoma for a chat.

He played the course during the day and said the reaction from the members during the ceremonies was overwhelming.

“I couldn’t be happier with the way things came out,” he said. “Everything felt right and everything looked right. Russ and his crew did an amazing job getting it ready, particularly considering all the rain. The last time I was here there was a lot of mud and dirt and I couldn’t be prouder of what everyone has accomplished.”

During his round, veteran caddie Dan Griffin was correctly reading putts from all over.

“I said no way have you had time to relearn these greens,” Hanse said. “He said, no, they are breaking just like they did before. That made me feel good. Unitl you putt them, you never really know and that was a great validation that that we got it right

“I couldn’t walk three feet today without a member stopping and saying thank you. I want to say, thank you for entrusting us with this jewell and allowing us to put it back to what it was.”

Hanse said he will employ some of what he absorbed working on Maxwell’s layout in future work, particularly at the new course going in at the PGA of America’s new headquarters in Frisco, Texas.

“What does Picasso say? The good artists borrow but the great artists steal! We’re going to steal a lot from here when we go to build the course in Frisco.”

For much more on the Southern Hills renovation, be sure to pick up a copy of the June-July issue of Golf Oklahoma. Meyers will also be a guest on the Golf Fitness Systems Radio Hour Saturday morning 8 a.m. to 9 a.m. on The Tulsa Sports Animal, 97.1 FM.