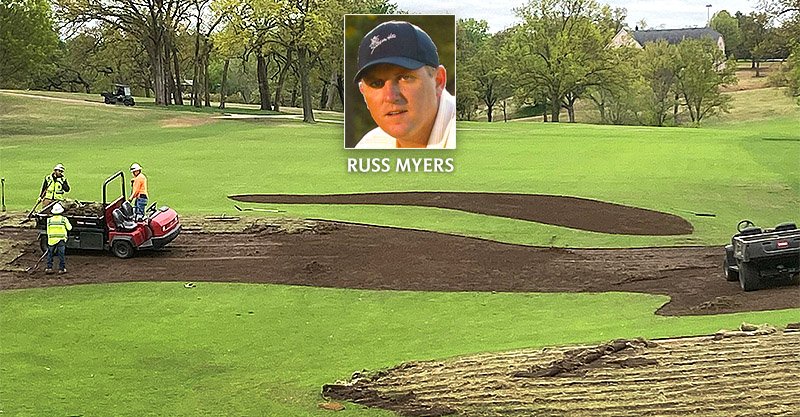 A record-shattering arctic blast in February combined with the continued lack of warm nights ideal for growing Bermuda grass has golf courses across Oklahoma – and the southwest – in a quandary.

Deciding what turfgrass, shrubs, trees or other plants are dead versus just slow to recover and when to begin the replacement process is a decision being made by superintendents across the state, as most yard owners can sympathize.

Of course, most courses do not have a major championship looming in less than six weeks and can afford to take a wait-and-see attitude. Not so at Southern Hills Country Club in Tulsa, where the 2021 KitchenAid Senior PGA Championship will be contested May 27-30.

That’s why superintendent Russ Myers has moved decisively this week to strip out and sod areas slow to show any signs of life. Myers has purchased in excess of three acres of sod from Charles Binney’s Riverview Sod Farm in Bixby, which produces the U3 (Astro) Bermuda that was used on the course when it was completely sodded in 2004.

“I don’t think we lost areas just to the cold, but definitely areas that were exposed to the north winds when it was well below zero,” Myers said.

The sod is replacing areas on green surrounds, strips of fairways on holes that run north-south such as 13, 16 and 17 and slopes in front of greens on other north-south holes such as nine and 18. The elevated tee box on the first hole was replaced.

Myers hopes to have all the sod down by the end of this week and have it basically be unnoticeable by early May. He and all superintendents are looking forward to some daytime temperatures in the high 70s or 80s and nighttime temperatures in the 60s. That’s the combination that helps Bermuda take off and makes fertilizing it more effective.

“If we can have one four-day stretch of heat things will change in a hurry,” Myers said. “In a normal year, we wouldn’t be even looking at these areas and making a decision until around May 1. Things are obviously on a different time frame this year.”

One of the big question marks around the state this year was how ultradwarf Bermuda greens, even those properly covered, would survive temperatures that reached as low as minus 17.

Although they have been slow to respond in some cases and many are still struggling – and again, the weather has not cooperated – it appears most if not all have survived. That is not the case in Texas, where some courses did not cover their greens.

Fairways, roughs, tee boxes and surrounds are another matter. A lot of courses will be doing exactly what Myers is doing, only probably not until giving whatever Bermuda did survive a chance to fully emerge. It may be a really good spring to own a sod farm.