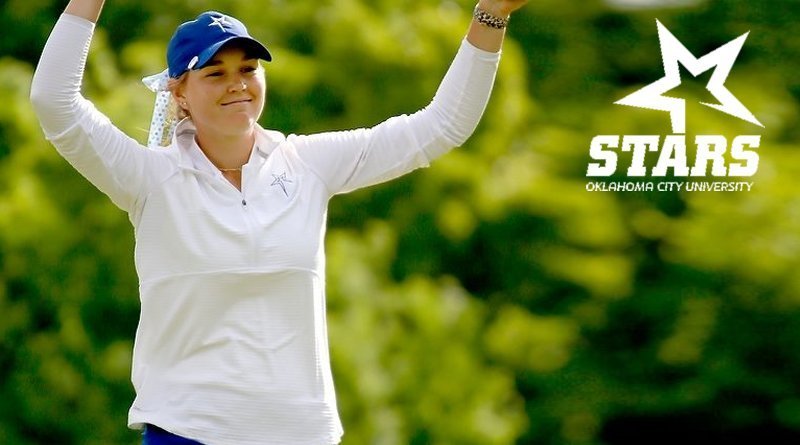 Oklahoma City University may not have won the 2019 NAIA National Championship it hosted at Lincoln Park Golf Course in Oklahoma City, but watch out in the near future.

Coach Marty McCauley’s lineup of three freshmen, one sophomore and a junior advanced light years from the fall to spring seasons, and would likely be holding the championship hardware now if not for a nervous second round in which it shot 32 shots worse than it’s tournament-leading 287 first round.

Even with all five players experiencing their worst rounds at once, the Stars regrouped and bounced back with rounds of 296-293 to finish fourth, 20 shots behind winner British Columbia, which closed with a 291 led by Avril Li’s 3-under 69. Li finished second at 1-under 287 to Michela Tjan of runnerup Keiser University, who shot 4-under 284 .

The Stars were led by junior Melissa Eldredge, who closed with a 1-under 71 to finish alone in fourth at 1-over 289. That despite a second-round 82 which included a nine on the perilous 17th, which features a firm downhill fairway with the approach shot to an elevated green guarded by a large pond.

On Friday, Eldredge topped her tee shot on 17 and had 171 yards in to the hole. Her second shot bounced into deep grass in front of a greenside bunker. This time she played a wonderful pitch that rolled in for a  birdie. Not textbook, but a three on the card.

“I have a knack for making weird chips like that,” Eldredge said. “I made one in the state tournament as a junior. I couldn’t even take a full stance, but I had a feeling standing over it that it might go in.”

That hole bit sophomore McKenzie McCoy Friday. She had a 2-under round going, her lowest round at that point in her brief career, but took an eight there and finished at 2-over 74. Freshman Natalie Gough chipped in for birdie on the 18th hole to finish at 1-over 73 and tied for 21st. Lauren Behnken and Lauryn Pritchard each shot 75.

“I don’t know if I’ve ever been more proud of a group,” McCauley said. “That second round was about as bad as it could get. The cool thing with this group is they didn’t quit. Even the girls not playing cheered louder and we just had a really good vibe the last two days.”

McCauley said he is still at a loss to explain Wednesday’s second round. Sometimes bad vibes are as infectious as good ones.

“Good golf or bad golf, there was something palpable in the air,” he said. “But I could not be more proud of how they finished. To watch them still chipping in and trying their best at the end. They believed they were going to come back and win the tournament. They never once faltered or veered from the game plan or felt sorry for themselves. They came back and fought like hell.”

Eldredge, who played on the 2017 national championship team, said she could sense her young team coming together gradually all spring after a less-than stellar fall campaign.

“We were so young and it’s a learning and building process,” she said. “They’ve learned and dug it out and now they’re going to be more confident and experienced going into their sophomore year.

“We’ll be ready to kick some butt next year. I think it’s important to see that you can kick some butt and do it on a national stage. We’ve seen that now for the first time and I think we’ll do great next year.”

The Stars return nine of their 10 players and have two talented recruits arriving in Class 5A individual champion Blayne Barker from Durant and Adeline Norton of Plainview.

“This team improved more than any team I’ve had in my career,” McCauley said. “They never felt sorry for themselves and never gave up. Even when we weren’t playing well, we still believed we could be a great team.