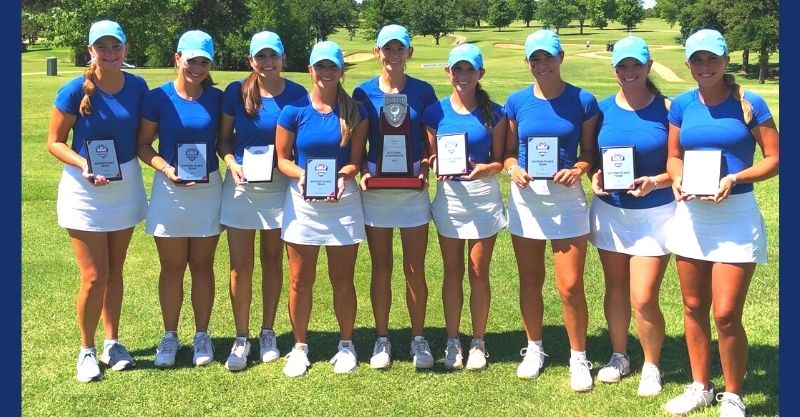 Reagan Chaney would have set an NAIA national championship scoring record. Her Oklahoma City University team would have smashed team records as well.

Problem was, there was one individual and one team even better in the tournament, held Wednesday through Friday on the West Course at Lincoln Park in Oklahoma City. It was shortened to 54 holes after rain washed out the opening round Tuesday.

British Columbia, which like OCU had not lost to another NAIA school all season, kept its record intact by holding off a determined charge by the Stars Friday afternoon to win the 2022 NAIA National Championship by five shots over OCU.

Chaney, the long-bombing freshman from Ardmore, opened with a double bogey, but then starting at the fifth hole went on a birdie rampage, making eight in the next 12 holes. She shot 4-under 68 to edge fellow freshman teammate Maddi Kamas by a shot for solo second place at 9-under 207. Kamas closed with a 2-under 70 to finish tied for third at 208.

The individual winner was Minji Kang of Truett McConnell, who smashed the NAIA Championship scoring record by 12 shots even though the event was shortened to 54 holes Kang finished at 12-under 204 after rounds of 69-66-69. She is a 22-year-old freshman and currently ranked 131st in the World Amateur Golf Rankings.

British Columbia and OCU had not seen each other in a tournament all season as the victors play most of their events in Canada or the northeast. Led by Sonja Tang, who finished sixth at 212 after steady rounds of 70-71-71, and Grace Bell, seventh at 213, British Columbia opened a 10-shot advantage after 36 holes and hung on as Chaney and Kamas fueled an OCU charge.

The Stars also got an even-par round of 72 from sub Morgan Palermo, while Paige Wood shot 73 and Natalie Gough 77. Gough, the only senior in the starting lineup, announced she would return in 2022-23 to use her Covid year of eligibility.

“I couldn’t be prouder of our girls, they came out determined today and made a charge,” said OCU coach Marty McCauley. “Actually, we got off to really slow start with Reagan making a double bogey on 1 and Maddi on 2. But then we fought like hell to come back. We pushed them. I think we got it down to four at one point.

“This hurts in the moment, but I think when we look back, it will be one of the greater seasons in NAIA women’s golf history. Our scoring average is going to be around 292, and the best in previous school history was 305.”

Chaney said she used the opening double bogey as motivation.

“After that, it kind of fired me up, pushed me to be more aggressive and try to make birdies and help the team out a little more,” Chaney said. “We did push them, we had a good run, but it just didn’t happen this year. Next year it will.”

Chaney birdied holes 5, 6 and 7, then 11, 12 and 13 on the back. She finished her barrage with a birdie on the par-5 16th, hitting a 3-wood cut shot over the trees from over 200 yards out to an elevated green from an awkward angle and finishing just off the green for an easy up-and-down.

Kamas polished off her round with a birdie on 18 and like Chaney enjoyed her first national championship even if the No. 1 goal wasn’t reached.

“We obviously wanted to win but it just didn’t happen for us today,” Kamas said. “We’re a young team and this was great experience. It was a lot of fun.”

McCauley put together a team that registered 14 rounds under par in 2021-22 including Friday’s 5-under effort. In 21 previous years OCU had only 11 rounds under par, despite winning eight national titles.