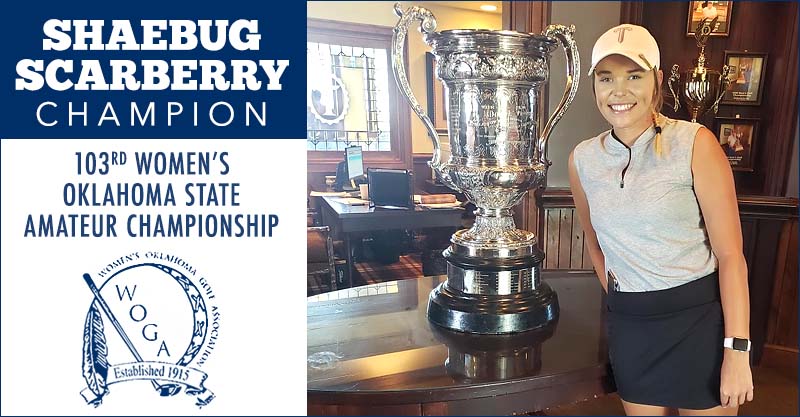 DUNCAN (July 15, 2021) – Known as much for her flamboyant outfits as for her considerable amount of golf game, ShaeBug Scarberry went with a subdued – well, for her – gray-and-black look on Thursday for the title match in the Women’s Oklahoma Golf Association State Amateur Championship.

Sometimes, the basics are enough, and that was the case for Scarberry at The Territory Golf and Country Club. Playing steady from tee to green, Scarberry had only two birdies but limited her mistakes (recording only two bogeys) and was in control most of the way in downing 59-year-old Janet Miller of Catoosa 4 and 3.

The WOGA State Amateur title was the first for Scarberry, who’s from Purcell and will be entering her junior season at Troy University this fall. She lost in the 2019 WOGA title match to Sydney Youngblood of Durant.

“I really just tried to hit fairways and greens,” said Scarberry, whose traditional mismatched knee-high socks also were neutral colors – one solid gray and the other gray, white and black striped. “I really wasn’t making anything. I was just making a whole bunch of pars. Sometimes steady does win it. I wish I could have made a few more birdies but I was hitting it well, so I wasn’t too upset about how I played.”

Miller, playing in her first WOGA State Amateur title match since 1991, actually had more birdies (three) than did Scarberry. But Miller sometimes struggled with her approach shots, which often left her with birdie putts of 50 feet or more, making it difficult to put pressure on Scarberry.

Miller flushed her approach shot on the par-5 No. 2 to within three feet and sank the birdie putt to take the early lead. That seemed to wake up Scarberry, who answered with a five-foot birdie putt at No. 3 – after her approach shot, which appeared to be going left of the green, instead took a favorable carom toward the hole for her.

That started a stretch of four straight hole wins for Scarberry. Miller flubbed a chip shot from just off the green on the par-3 No. 4, which led to a double bogey, and she three-putted from about 60 feet at No. 5 and No. 6. Scarberry parred all three holes to go 3-up.

Miller said that stretch “kind of killed me. I was fighting a mood when I came here that was not good and I fell back into it today for three holes, then kind of straightened it out and played her pretty tough after that.

“It was a good experience. I was kind of hoping. I’ve played for this (title) four or five times but I’ve always been the runner-up. I just didn’t play as good today as I had the last few days. It’s a long time since I’ve been in this level of competition. I think I let it get to me a little bit.”

Miller sank a 12-foot birdie putt while Scarberry bogeyed the par-5 No. 7, but bogeys at No. 9, No. 10 and No. 11 cost Miller each of those holes, putting Scarberry 5-up. Scarberry made a rare mistake on No. 12, sending her tee shot deep into the right rough, and that led to a bogey, allowing Miller to make up ground with a par.

At No. 14, Miller stuck her downhill approach shot to five feet and sank the birdie putt, cutting more into Scarberry’s lead, but Scarberry’s final scot was her longest successful putt of the round, a 30-footer for birdie at No. 15. Miller almost made an identical putt, but it lipped out of the hole, ending the match.

“I hadn’t really had a putt fall all day, but I had the line and hit it the right speed and just rolled it in there,” Scarberry said.

Scarberry will return to Alabama for college in early August and she said she plans to use the extra season of eligibility the NCAA granted to all collegiate players due to the COVID-19 pandemic. Before that, she’ll be on the Oklahoma team for the annual Fore State competition, to be played Aug. 1-3 at Millwood Golf and Racquet Club in Ozark, Mo.

“After that, I’ll go straight to Troy because I’ve got to be down there to move some stuff in and get ready and settle in for school,” she said. “We start classes early.”

In the President’s Flight – the second-highest bracket in the event – Alyssa Wilson of Yukon, a rising sophomore at Oklahoma Christian University, held off Kim Bell of Norman 1-up. Wilson was 4-up after five holes but Bell had tied the match by No. 10. The match was all square after 15 holes before Wilson won No. 16 with a par and held on.