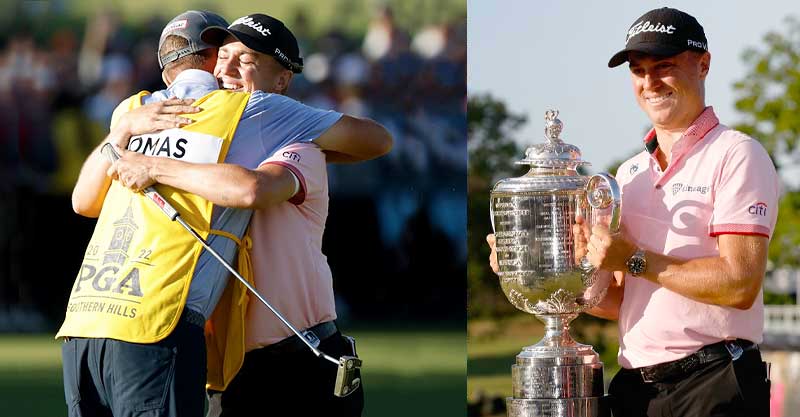 With all due respect to the vastly talented young golfers Will Zalatoris, Mito Pereira and Cameron Young, your time is going to come.

Justin Thomas’ time is now, and his victory in the 2022 PGA Championship couldn’t have worked out any better for the PGA of America, Southern Hills, the 40,000 or so fans on hand and the history of major championships at this venue that tests every ounce of your skill, nerve and perseverance.

Thomas’ 3-under 67 put him in a playoff with Zalatoris as Pereira, the 27-year-old Chilean, wiped his drive on the 18th hole right and into a creek, leading to a double bogey that dropped him from a shot ahead to one agonizing stroke out of the playoff.

Thomas then birdied the par-5 13 and drove the green on the short par-4 17th, leading to a two-putt birdie. He parred the 18th. Zalatoris, the 25-year-old Texan who won the 2014 Trans-Miss Amateur Championship at Southern Hills in his previous visit, made birdie on 13 and pars on 17 and 18 to finish a stroke back.

Thomas, 29, won his second PGA Championship, having first won in 2017, matching a record for the biggest comeback in PGA Championship history set by John Mahaffey at Oakmont in 1978. He did it by playing a flawless 3-under back nine including birdies on 11, 12 and 17, while his chief competitors were in what seemed an endless battle just to make a par.

For the week, he had three rounds of 67 and a 74 on Saturday when winds howled out of the north. He got a pep talk from caddie Jim “Bones’” Mackay after that round, but in the end was proud of his effort to handle everything the course and the weather threw at him over four days.

“I’ve never played it so severe, because when we played Friday morning it was howling out of the south, and then yesterday it was cold and howling out of the north. That doesn’t happen often, let alone in a major championship and at a place like this.

“It just brought out another side of everybody. It challenged us, and I was excited for that. It was very, very tough but everybody had to deal with the same kind of stuff.”

Pereira was 9-under and cruising through six holes, but everything from that point was a struggle. He bogeyed 7 and 8, had to make long par putts or fantastic chip shots to makes pars on 9, 10 and 11 and then pulled his drive on 12, leading to another bogey. He birdied the par-5 13th, but then rifled his tee shot on the par-3 14th all the way up by the 15th tee box. Even after that bogey he was able to make his way to the 18th tee box with a one-shot lead.

While deeply disappointed, Zalatoris took pride in his second runner-up finish in a major, having done the same in the 2019 Masters. He made a clutch par save on 18 to get into the playoff. Like Pereira, he narrowly missed a lot of par and birdie efforts on the back nine. He bogeyed 12 and 16 but got up and down from a greenside bunker on 17 for a birdie that got him back to 5-under.

“I’m pretty proud of the result I had,” Zalatoris said. “I always felt like I was one, two, three back, and then when it saw Mito hit it in the water on 18, I knew that putt I had was to get in a playoff. So I will bottle that putt for the future. I’m pretty excited for where my game is at and I know I’m going to get one. It’s just a matter of time.”

Thomas is a huge friend of Tiger Woods, who won the 2007 PGA Championship at Southern Hills and withdrew after three rounds here this week, the third of which was a painful march to a 79 Saturday.

“I think now I only have like 150 other things to do that he’s done to where he can stop giving me grief,” Thomas said. “So I guess it’s just a steppingstone. I mean, the list of champions at this place, I think that kind of speaks for itself. When you get good golf courses like this, you have to know your way around. You just have to play golf and you have to execute. I think being on the list of champions here is very, very special and it’s definitely nice doing it after he did it in 07.”

The tournament, from the player reaction to glowing television coverage to the variety of challenge presented by the course and weather, was a resounding success and let there be no doubt was an experience the PGA of America would like to repeat in a 10-year window. Much more on those possibilities in the days ahead.

For now, superintendent Russ Myers and his crew and volunteers should take a bow for handling the myriad of challenges thrown their way, including the winds from three directions, rain and 40-degree swings in temperatures.

“The goal was to show the world that this place didn’t need claustrophobic thick rough to challenge the world’s best players,” Myers said. “That started with getting Gil (Hanse) in here and opening things up. To show we can get a major champion like Justin Thomas in here at 5-under par, I think that’s a validation of everything we did over the last six years and I couldn’t be prouder of that.”

University of Oklahoma graduate Abraham Ancer began the day at 4-under. As it turned out, a 1-under round Sunday would have put him in the playoff, but four bogeys on the front nine derailed his hopes for his first major championship. Ancer made par on all nine holes on the back nine and finished in a tie for ninth at 1-under.

“It was awesome this week,” said Ancer, who heard a lot of Boomer Sooner encouragement from fans. “I felt right at home. The crowds were unbelievable. Super supportive.”

Talor Gooch of Midwest City and Oklahoma State shot a final-round 2-under 68 to finish at 1-over and tied for 20th. He took the brunt of the wind with his early time Thursday and late time Friday, then had a few unfortunate breaks on the two front nine par-3s on Saturday or he could have easily been in contention. His ball striking was rock solid. Like most of the field, he had trouble holing birdie putts even when he was hitting it fairly close.

Still the effort gave him confidence moving forward that a major championship is within his grasp.

“It was as good as good as I could imagine,” Gooch said. “I wish I could have got more out of my game. I played really well the first three days and just really didn’t get much out of it. The course, the fans, it was everything I could have imagined, just amazing.”

“The more you play, the more comfortable you get and I’m continuing to prove to myself that my game can compete with the best at the best venues and at the highest levels. Just growing with confidence. Keep getting in traffic and eventually we’ll hit.”

Former Cowboy Rickie Fowler finished tied for 23rd at 2-over after a final round of 70. Stillwater resident Viktor Hovland of OSU shot his third even-par round of 70 and finished at 5-over and tied for 41st.