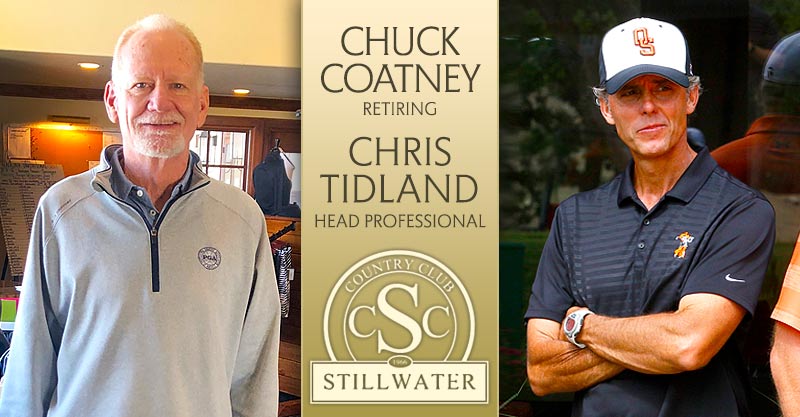 Chris Tidland has traveled far and wide and played many of the world’s top courses pursuing a professional golf career since his days as an All-American at Oklahoma State, but he always winds up back in Stillwater.

Much as his best friend Alan Bratton landed as head men’s golf coach at OSU, Tidland is now the head professional at Stillwater Country Club, having been promoted from his assistant post. His love for the town and university runs deep.

“I fell in love with Stillwater a long time ago,” Tidland said. “And with this course. This is where Alan and I played every day before there was a Karsten Creek. I live right on the first fairway and I’ve raised my kids here. I’ve known a lot of these members for 20 plus years. It should be a seamless transition.”

Tidland replaces Chuck Coatney, who is retiring as both head professional and general manager. Coatney will be replaced as GM by Dawn Coleman while Tidland takes over the pro shop. Coatney said he was looking forward to spending some time actually getting to play the game and would be looking to sharpen up his game to be able to compete with his wife, Oklahoma Golf Hall of Famer Patty Coatney.

Tidland, who teamed with Bratton from 1990-95 at OSU, including the famous takedown of Tiger Woods’ Stanford team at Ohio State in the spring of their senior year, played professionally for most of the past 25 years, bouncing between the PGA Tour, the various incarnations of the current Korn Ferry Tour, and also at times on mini tours. Two recent shoulder surgeries forced his hand in retirement, but they were not the only injuries he battled. He had shoulder surgery in 2012 and was never able to achieve his earlier consistency after that.

After college, it took Tidland six years but he became a PGA Tour rookie in 2001, making the cut in 14 of 29 events. He went back and forth between the PGA Tour and the KFT until missing the entire 2012 season with shoulder issues, and has played only sporadically on the professional tours since. He won two events on the Korn Ferry Tour, the 2008 Boise Open and the 2009 Preferred Health Systems Wichita Open.

Tidland has worked hard to gain his Class A status as a club professional, though he was a bit uncertain how he would react to all the myriad duties of a club pro compared to a touring pro, who has one objective.

“I was hoping I could stay in the game,” Tidland said. “I love the game and didn’t want to stop playing, but I just couldn’t anymore. I didn’t know if I would like being in an office, but fell in love with this job pretty quickly. It’s still a learning curve for me and I pick a lot of brains Chuck has been great and I put in a lot of calls to Cary Cozby (Southern Hills), Tim Fleming (OKC Golf & CC) and others. There’s plenty to learn.

Tidland and his wife Amy have two children. Son Jackson is a junior at Washington University in St. Louis and daughter Isabella is a freshman at OSU.