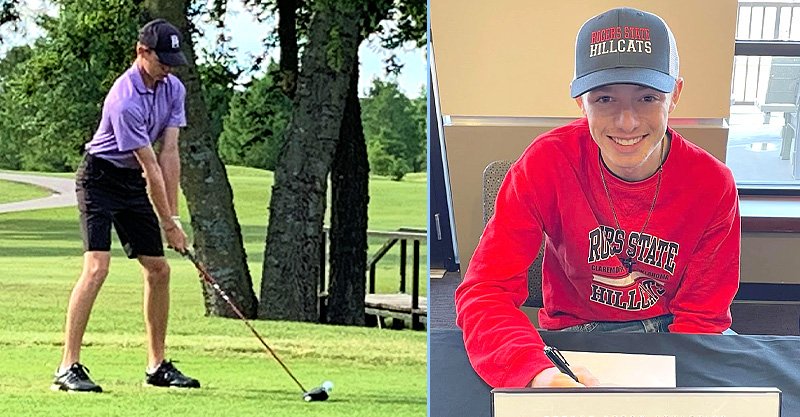 Traden Karch took another giant step on his remarkable comeback from a near-fatal auto accident when he recently was offered a spot to play collegiate golf at Rogers State University.

Karch, a senior at Broken Arrow, joined teammate Tyler Collier with the Hillcats.

RSU coach Stephen Brown moved to the area in 2017 from California, a year after Karch suffered multiple skull fractures and brain injuries in a car crash on Feb. 23, 2016. He was in a coma for three weeks and doctors were initially doubtful he would live or ever be able to walk or function normally if he did.

Brown said he was told about Karch by a former RSU player Jacob Baird, an assistant at The Club at Indian Springs, where Karch also works part-time.

“He said we’ve got a kid Traden who’s got a ton of talent, a super good kid with a great story,” Brown said. “He told me, just Google him and you’ll cry. And I did.”

Karch’s effort to recover was embraced by the golf community worldwide, and he was hosted at the PGA Championship by Rory McIlroy and others. Six years later he is a 5-11 senior with a good swing, a need to add strength and power and better course management.

“I went out and watched him and saw a young man with a lot of talent who doesn’t always manage the course well,” Brown said. “He makes a lot of birdies which I like. Once he gets in college he’ll get stronger and we’ll have those conversations about course management. I think he’ll do very well.

“He’s an incredible story and I was really moved by what the schools and students and prayer groups did to help,” Brown said. “The support that he’s received from some of the premier players in the world was awesome.” Karch is not technically receiving a scholarship but a spot on the roster and an opportunity to play himself into a significant role.

“Traden has two factors in his favor,” he said. “One is his ability to play golf. The other is he’s an extremely likeable person. I had a coach who has been at this a lot longer than me tell me, surround yourself with guys you want to be around. So Traden is getting this opportunity because of his ability and because he’s a great kid and going to be a good teammate.”

Brown said once Karch adds some strength and length to his game and cleans up the course management issues, he’ll have a successful college career. Meanwhile he’s excited to see how he fares for Broken Arrow this spring and in summer events.

“He tells me he’s working out hard and getting ready,” Brown said. “He really wants to prepare himself well for that. He’s got a good swing and good tempo. He’s going to do well.”