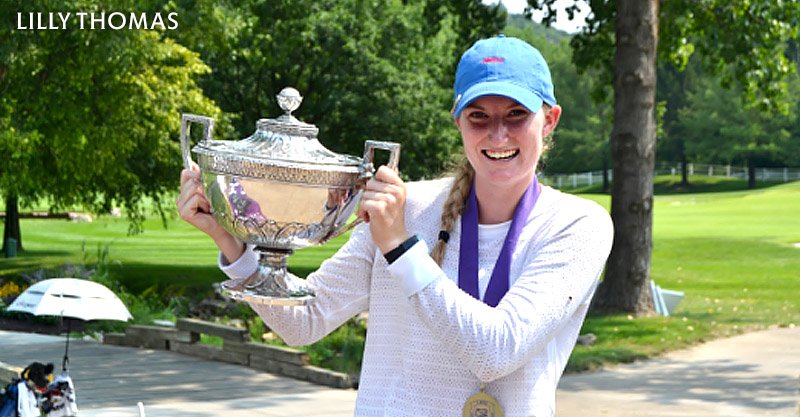 A bit tardy with this one, but Golf Oklahoma would like to recognize that the University of Tulsa’s Lilly Thomas won the LNGA Amateur Championship July 28 at the Country Club of St. Albans in St. Albans, Mo. TU also won the team championship at the event.

Thomas made birdie on the first playoff hole to claim the prestigious championship. The junior at Tulsa began the day with a four-shot lead after going 8-under (70-66–136) the first two days of competition. The four-shot lead shrunk to just one after seven holes. Thomas was able to stay within a shot or be in a tie with Laila Raines and Ashley Lau on the back nine. The three made up the final group on Wednesday.

“It was a grind the whole day, started off a little rough on the third hole with a lost ball, but birdied the second ball to just make bogey,” Thomas said. “I got to the back nine and that’s where I was making birdies the most the first two days so I knew I could get it rolling on the back.”

Thomas and Raines both birdied the par 4 16th to tie for the lead at 6-under. One hole later, the pair made bogey while Lau made birdie and Lau marched to the 18th tee with a one-shot lead. Thomas, needing to make birdie, drained a 12-footer to force a playoff.

“Coming down 18 I knew I had to make that putt to force a playoff, firm right side, it went it so that was nice.”

Both Lau and Thomas headed back to the 18th tee for a sudden death playoff. Both hit the green in two and had long looks for birdie below the hole. Lau went first and came up just short to the left of the hole for a routine par. All eyes were on Thomas, who sank a forty-footer for the win. The Bentonville, Arkansas, native went 6-under (70-66-74–210) over the three days.

“I was excited to play 18 again for the playoff, I saw that break before with my playing partner, so I had a pretty good idea of what it was going to do.”

Tulsa won the Howell Team Trophy. Thomas, along with teammates Tsai-Ching Tseng and Haley Greb, shot par-or-better all three rounds as a group to shoot 7-under (143-138-144–425) and win the team trophy, making it a sweep of the major trophies up for grabs for the Golden Hurricane.

“We were in the regional that was cut short, so us playing together again here was really fun for all of us,” Thomas said “It showed what would, should’ve happened at the end of last season and builds our confidence going into this coming season.”

“It’s fun to be here, I haven’t seen them all summer, and it was good to get that team atmosphere back,” Haley Greb said. “These girls obviously played great this week but it’s fun because we push ourselves all the time on and off the golf course.”

Jennifer Cai claimed Junior Medalist honors. The sophomore at Northwestern was the only player under par in the race for the medal, shooting 2-under (71-71-72–214) over the three days. Cai was one of just three in the field to shoot par or better all three rounds.

Leila Raines finished in third place after a final round 1-under 71. The sophomore at Michigan State played consistent golf all week, going 5-under (69-71-71–211).

Sarah Bell of Oral Roberts set a new course record at The Country Club of St. Albans with a final round 8-under 64. The Cape Girardeau, Missouri, native carded seven birdies and an eagle. Bell moved all the way up into a tie for fifth after shooting the record round, and finished with a three-day total of 2-under (77-73-64–214).

The LNGA is a national volunteer women’s amateur golf association founded in Kansas City Mo. in 1927 to promote amateur golf and good sportsmanship among women golfers and junior girls.  Our events are hosted at venues across the United States. The events spotlight the nationally prominent amateur golfer that may be eligible for Curtis Cup team selection along with the skilled players from around the world. The LNGA Amateur, the Women’s Mid-Amateur and the Senior Women’s Amateur are included in the World Amateur Golf Ranking (WAGR) list of golf championships.