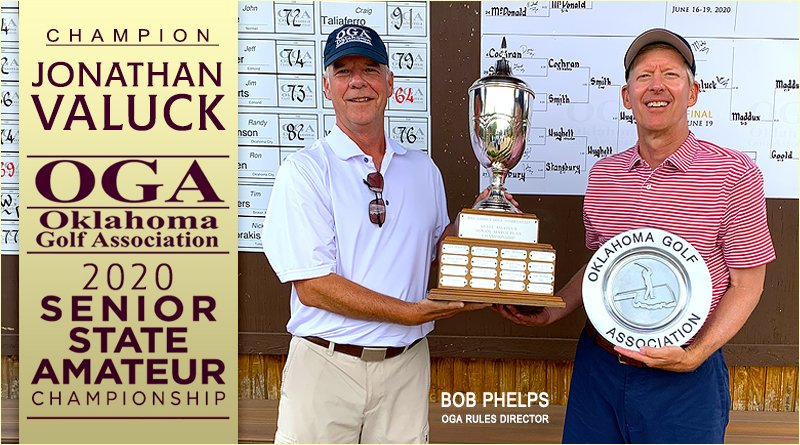 It could scarcely have been a more rewarding week of golf for Dr. Jonathan Valuck.

Unable to hit full shots most of the spring with tendinitis in his right elbow, Valuck relentlessly practiced his short game. That stood him in great stead at Belmar Golf Club, where accuracy and adeptness around the greens are a higher priority than length.

His putting and wedge skills were on full display in a 2 and 1 victory over Mike Hughett of Owasso Friday morning to win his first Oklahoma Golf Association Senior State Amateur Championship. Valuck, 59, had won the Senior Stroke Play Championship in 2017, but had disappointed himself by never prevailing in match play.

“This means so much to me,” said Valuck, a cardiologist at Oklahoma Heart Hospital in Oklahoma City. “I felt like I had underachieved for a long time. I still hope I’m a better golfer than doctor, but it’s nice to be good at both.”

Valuck, a member at Gaillardia Country Club in Oklahoma City, had never played the 6,519-yard Belmar previous to this week but fell in love with it quickly, finding it matched his skill set – straight off the tee and a good short game. Hughett, who drove it some 50 yards past Valuck on the three par-5s, saw his advantage in length otherwise nullified. He hit irons off the tee on every par-4.

“I followed my game plan and hit the ball pretty well, but just not close enough to make many birdies,” said Hughett, who was going for his fourth senior state amateur title and 23rd victory in OGA championships. “Jon played really well. He was putting his eyes out, particularly on the front side. He missed a couple on the back, but hit a lot of great shots as well.”

Hughett made three birdies on the front, but also three bogeys. Valuck capped two of his birdies and made an incredible par-save on the par-4 fifth while shooting 4-under on the front to take a 4-up lead at the turn. He got up and down from 66 yards on the 531-yard par-5 ninth hole while Hughett was pin high with a look at eagle.

“Getting out of the ninth hole with a halve was huge for me,” Valuck said.

Hughett was more impressed with Valuck’s par on the fifth after his second shot landed short and rolled down a hill. He pitched up to 10 feet and rammed it in to save par.

“I didn’t think there was anyway he makes par there,” said Hughett, who was also short and could not get up-and-down. “I thought he had a tougher shot than me, but he saved it.”

Valuck promptly three-putted the par-4 10th, his first mistake of the day, and Hughett crept closer with a birdie on the par-5 12th. When Valuck missed a 6-foot par putt on 15, the lead was down to one.

“The three-putt on 10 shook my confidence a little,” Valuck said. “After the bogey on 15, I told myself it’s time to play golf.”

Valuck drilled a wedge to about 7 feet below the hole on the par-4 16th and made the birdie putt to go two up with two holes left. He made a 10-foot par putt on the par-3 17th to close out the match.

“That’s the first time I’ve ever beat Mike in match play,” Valuck said. “He’s such a fine guy and a good competitor. He couldn’t be nicer to play with or against. I was fortunate that I got off to such a good start.”

Perhaps, but Valuck was sensational throughout. After two practice rounds, he shot 64 in qualifying and finished the week at 15-under.

“I had never played Belmar before, but I just love it,” Valuck said. “This course certainly favors someone who is a straight hitter and has a good short game.”

And someone with a lot of heart, as Valuck showed down the stretch.