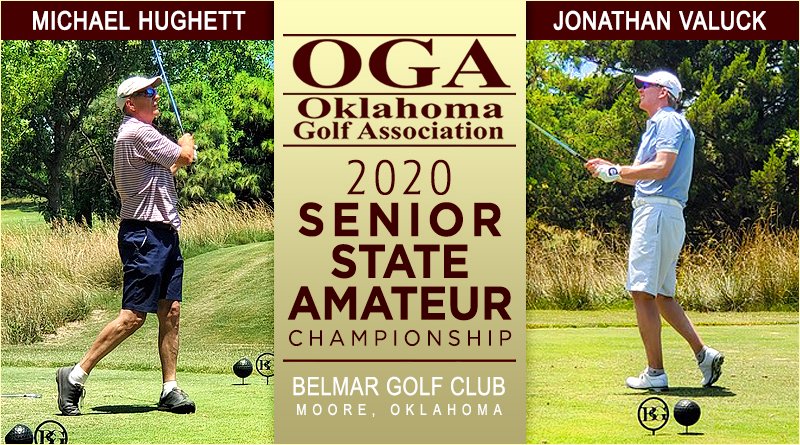 MOORE – Mike Hughett is the most dominant player in Oklahoma Golf Association history, with 22 OGA event titles, but at 61, he doesn’t know how many more wins he has left in him. He moved a step closer to another on Thursday in the OGA Senior State Amateur Championship.

Hughett, from Owasso, held off defending champion Blake Gibson of Yukon 3 and 2 in one semifinal on a hot afternoon at Belmar Golf Club. Jon Valuck, an Oklahoma City cardiologist, took the other semifinal, beating Bruce Maddux of Ponca City 5 and 4.

“When you get to 60, you never know how many more chances you’re going to get, so I’m going to try to take advantage,” Hughett said. Valuck “has played really well all week. I expect him to play well tomorrow. He’s very consistent. I’ll have to have my best game to win.”

Three of the four Thursday morning quarterfinals ended up being routs, with the closest match being the top-seeded Gibson’s 2-up win over fifth-seeded Andy Lucas of Tulsa, so OGA officials decided to move up the starting times for the semifinal matches by about an hour, hoping to avoid the heat of the day.

Fast starts for Valuck and Hughett proved to be critical in the semifinal matches. Hughett won the first two holes and Gibson – who won the 2019 title at his home course, The Greens Country Club in north Oklahoma City – never quite recovered.

Gibson won the par-4 No. 4, but Hughett answered by winning the next hole, also a par-4, and he went 3-up by winning the par-5 No. 9 after Gibson – for the second time in the round – had to take an unplayable lie.

A birdie by Gibson at the par-4 No. 10 gave him hope, but Hughett again won the next hole, a par-3. Gibson birdied the par-5 No. 12, but struggled to pull closer. He had to make an eight-foot putt to halve the par-3 No. 13 and both players parred the next two holes.

Needing to make something happen, Gibson tried a risky second shot at No. 16 and it ended up well below the green, near a creek running by the hole. He couldn’t get up and down and Hughett hit a short par putt to take the hole and end the match.

“It’s a long week and you get tired both mentally and physically and with the heat and everything, you expect to lose a shot once in awhile,” said Hughett, who played the qualifying round on Tuesday, then two matches each on Wednesday and Thursday.

“He really scrambled well. I just couldn’t get a putt to go in. I hit a lot of 10-footers that lipped out. I had three lip-outs in a row in one stretch. I was burning the edges all day. But I was for the most part hitting pretty good shots and trying to keep it in play. But he kept hanging around. He wasn’t going to go down easy, that’s for sure.”

“In both of my matches, I was able to get up early,” Valuck said. “In my morning match (a 6-and-5 win over Don Clark of Shawnee), I just finished strong with a bunch of birdies. This afternoon, I didn’t putt as well. I was closer to par. It is nice to get up if you can and force your opponent to make tough putts and work hard to keep from falling further behind.”

Hughett “has had a lot of success in the OGA,” Valuck said. “I’m just hoping I can slip past him somehow tomorrow.”