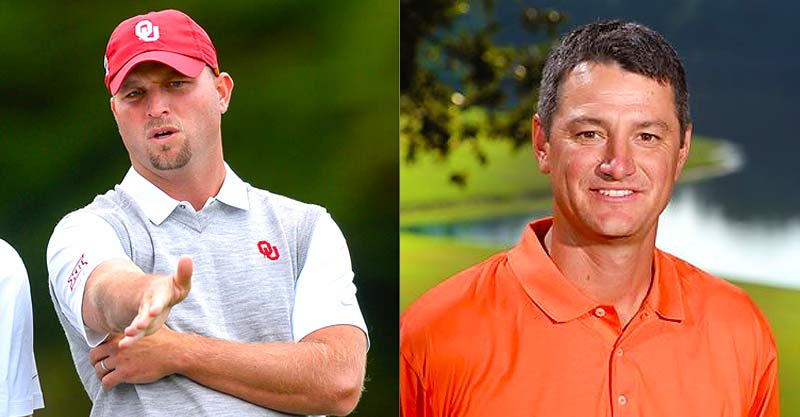 That season begins with Big 12 teams competing in the Colonial Collegiate Invitational Sept. 27-29 at The Colonial in Fort Worth. From there the conference teams go to Houston for the Big 12 Match Play Championship Oct. 1-4 at Houston Oaks. The fall season also includes the Maridoe Collegiate Invitational Oct. 18-20 at Maridoe Golf Club in Carrollton, Texas. The Sooners may have a fourth event in the East Lake Cup.

Neither the Sooners or Cowboys have had a full team practice in the past two weeks while various players have tested positive or been quarantined due to their living proximity with those who have tested positive. OSU coach Alan Bratton said he has had five players test positive for COVID-19 while Sooners coach Ryan Hybl did not specify the number but said it was significant.

Hybl said all the players who have tested positive are recovering and he expects to have his full complement of players practicing by next week. Bratton said no players have become seriously ill but several reported a temporary loss of taste along with other aches and milder symptoms.

Both coaches credited their university’s medical staffs with doing a great job with testing, protocols and procedures to keep the students safe and healthy.

“We’ve been fighting the COVID battle since we got back on campus,” Hybl said. “There’s no reason to downplay it. We’re doing everything in our power to keep them safe.”

Golf has been regarded as a safe activity during the pandemic, but there’s a big difference between practicing and playing golf and living in close quarters with teammates as well as attending classes or other campus activities. Most golfers live in pods with other players and if one tests positive everyone in that section undergoes quarantine.

“We should have everybody back by next week and have some good quality days for us to do our normal job and get prepared,” Hybl said of his Sooners, expected to be one of the nation’s top teams in 2020-21. “The guys in quarantine are in good spirits and know the end is in sight. “

“We’re fortunate to have a conference that is giving us the opportunity to play,” Bratton said. “The guys are excited to be going to where the PGA Tour also resumed at Colonial. It will be in great shape and a more difficult challenge than in the spring.”

The Big 12 and the Southeastern Conference are the only two of the Power Five conferences playing golf this fall and the SEC schools are playing conference only events. Several non Big 12 schools and individuals are scheduled to compete at Maridoe.

Hybl and Bratton both mentioned they had talked to other conference coaches whose teams have had COVID-19 positive cases develop since returning to campus. Baylor coach Mike McGraw said via text this morning that the Bears have not had any positive cases pending current test results due back today.

Big 12 women’s teams will also compete this fall with two tournaments based in Oklahoma and four overall. The schedule begins with the Schooner Fall Classic at Belmar Country Club in Norman Sept. 27-28.  Oklahoma State will host the Cowgirl Classic Oct. 22-23 at Karsten Creek in Stillwater.

OSU’s women’s team has not experienced positive cases of COVID-19 as yet, but three of its expected starters elected not to return to campus until the spring semester. Not back are Maja Stark of Sweden, Han-Husan Wu of Taiwan and Maddison Hinson-Tolchard of Australia. They will be eligible in the spring when they return.

Not only are the OU and OSU programs dealing with the virus and the resulting schedule adjustments, but both programs are facing budget cuts that will limit future in-person recruiting budgets and cut salaries due to the pandemic’s effects on the main revenue sports of football and basketball.

“There’s definitely going to be budget cuts and we all have to do our part,” Hybl said. “It will be difficult to maintain where we’ve been. But I trust Joe (athletic director Joe Castiglione) that we will be in a good spot on the back end of this.”

Beyond the Big 12, NAIA schools and junior colleges are competing this fall, while most of the NCAA Division II schools have canceled their fall seasons. Division I schools in non Power Five leagues such as Tulsa and Oral Roberts are mixed. TU does not have a fall schedule. ORU officials said they would have events this fall but no schedule has been released.

Not competing is no guarantee of not getting COVID-19. Emily Miller, the reining Oklahoma Golf Association Junior Girls champion and a freshman at the University of Central Oklahoma, wrote a poignant Facebook post this week about how she and her roommates had contracted the virus since school began, noting that the adverse affects were serious including breathing issues and that quarantine was not a pleasant experience either. Following is a portion of her post.

“COVID symptoms are NOT just allergies,” Miller wrote. “They aren’t just seasonal. It’s not a political hoax, IT’S REAL. Just because you are healthy does not mean you can’t get it. My roommates and I are athletes and very in shape, and we still have COVID. Our lungs won’t be back to normal for a few weeks to months (which isn’t good considering we get winded after taking a few steps, and we need to be conditioned to walking 6-7 miles in about two weeks). The recovery period is a long road. If you have symptoms PLEASE go get tested.

“This virus isn’t a joke. No, I am not on my death bed right now. But, I do have to stop to catch my breath to walk across my apartment because it gets hard to breathe. I have a fever. I have a cough. I can’t taste or smell. It feels like there is a textbook sitting on my chest. I get extremely fatigued after standing for more than five minutes. I can’t imagine having Asthma or other diseases that already make it hard for people – without even having COVID. ”