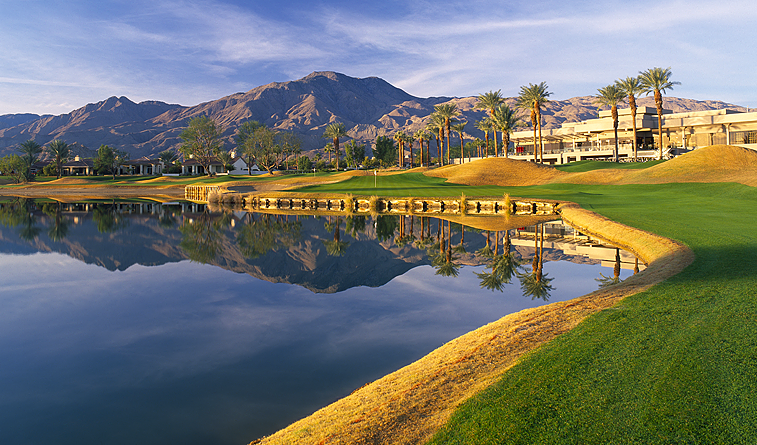 The story goes something like this. The wives of Ernie Vossler and Joe Walser drove up a little road in La Quinta one day while their husbands were busy escorting traveling guests from Oklahoma around the Coachella Valley golf courses in the Southern California desert.

What the women found was a charming little bungalow-style hotel called the Hotel La Quinta. It had been the site of one of the earlier golf courses in the Coachella Valley, dating back to 1927. That nine-hole golf course had gone fallow after World War II. Still, the women were charmed by what they found and told their husbands about the property.

From that simple visit sprang a true golfing empire in the desert just outside of golf-crazy Palm Springs. Vossler and Walser spent much of the next two decades literally reshaping the sand dunes of the area into world-class golf resorts and country clubs and in the process re-energizing a golf mecca. Vossler and Walser did more than just reshape an area that billed itself as the Winter Golf Capital of the World. They reinvented it.

From three Pete Dye-courses at La Quinta Resort to four courses at PGA West to new courses at properties like Mission Hills Country Club and Westin Mission Hills Resort, both in nearby Rancho Mirage, the dynamic team of Vossler and Walser brought world-class architects, top-level tournaments and television cameras to an area that had been mostly a retirement and weekend golfing community for the previous 30 years.

Vossler and Walser had seen the potential of the area for years when they would visit the Coachella Valley during the PGA Tour’s winter swing through California and Arizona. Vossler played in the Bob Hope Desert Classic nine times between 1960 and 1973, earning just $1,041 in two made cuts. But the knowledge Vossler and Walser gained from the trips was invaluable.

“Back in the early 60s, my dad was still a good player, he was still tour caliber at that time,” said Andy Vossler, now president of Landmark Golf, a company his father founded. “He began to come out here for about three to four months and play the winter tour and during a couple of segments of that he had groups of club members from the club back at home come out as well.”

The Oklahoma pros loved the Palm Springs area, even buying small homes in the desert. Having already developed golf courses as a team, they looked in the desert for the right opportunity to bring their kind of golf to the Coachella Valley. That opportunity came a few years after their wives had discovered the Hotel La Quinta.

Guests at the hotel were allowed playing privileges at nearby La Quinta Country Club, one of the grand desert courses built in the golf boom of the 1950s and a course played in the Bob Hope tournament. But the private club was about to end the practice of allowing hotel guests on its fairways. Vossler and Walser saw an opening and jumped at a chance.

The Oklahoma pair convinced hotel owner Leonard Ettleson to sell them the land around the hotel. In the land at the base of the red-hued Santa Rosa Mountains, Vossler and Walser unleashed their friend Dye to create two of the area’s most iconic courses, the Dunes and the Mountain courses, opened in 1981. It was a gamble, bringing in Dye’s distinctive and demanding architecture to a desert full of flat and simple golf courses.

Not everyone thought it would work, including some home and course builders who had populated the desert with their developments in the 1970s. Many of those homebuilders found themselves working for Vossler and Walser in the 1980s as the duo’s success gained momentum.

The pairing of Vossler and Walser, each bringing their own strength to the partnership now under the Landmark Land banner, was practically unstoppable. Vossler was known as the visionary, the idea man who pushed forward with those ideas. Walser was the realist, at times tempering Vossler’s push forward but at the same time helping to turn those visions from ideas into shovel-turning projects. Both had deep ties to the PGA of America and the PGA Tour and weren’t afraid to call on their friends to help built their desert empire.

With their success at La Quinta Hotel, the Vossler-Walser team spread their golf development prowess through the desert. But the masterpiece, beyond question, was the first course that the pair developed on what had been farm land even farther south in La Quinta, miles from any kind of civilization in the desert. Again, it was Dye who was called on to design not just a tough course, but an extraordinarily tough and dramatic course.

“I remember sitting in that meeting with Ernie and Joe when I met Pete Dye, and they told Pete, ‘Pete, we want you to make this the most difficult golf course in the United States,’” recalls Bill Bone, founder of Sunrise Company, one of those 1970s course developers who was now going to build homes on a property to be known as PGA West. “I said to Ernie, why do we want to do that? My homeowners typically aren’t very good golfers. Why would you want to do that? He said, oh now, we are going to build them for everybody. We are going to have the Palmer Course and the Nicklaus Course. We are going to do this and that. I said okay, guys, you think this is a good idea.  But I am telling you, the people I am selling homes to, they are not going to be real thrilled if you make that the toughest golf course.”

What Bone couldn’t have guessed was that the PGA West would be a huge success, both for golf and home sales. As it turned out, golfers were thrilled with the Stadium Course. Well, maybe not thrilled, but at least intrigued by the course, which opened in 1985. Television viewers across the country were equally intrigued when the Stadium Course hosted the Skins Game in 1986 and the Bob Hope Classic in 1987. PGA Tour players howled so much that the Hope tournament left the Dye design after a single year. But Ernie and Joe had used tournament play and television to spread the word about the dramatic changes that had come to the sleepy Coachella Valley golf world.

The success for Vossler and Walser, including six courses by Dye, continued into the early 1990s. But the brilliant run for the pair and for the Landmark Land umbrella under which most of the development came would end in the mid-1990s, a victim of the savings and loan scandals for the era that had nothing to do with the way Vossler and Walser developed or financed their golf courses.

Even after the S&L debacle, Vossler and Walser would develop other courses and bring other televised events to the desert. But that second act of the team’s show in the Coachella Valley never quite reached the heights of the 1980s and early 1990s.