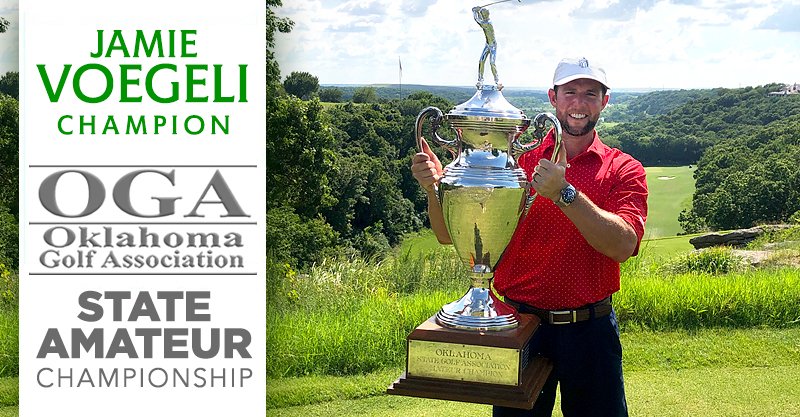 OWASSO – Aided by a caddie who put aside his own bitter disappointment at missing a golden opportunity to play his close friend in the finals, Jamie Voegeli completed his improbable maiden journey in the Oklahoma Golf Association State Amateur Championship with a joyous champagne-soaked ending.

The 31-year-old member of Meadowbrook Country Club and a sales engineer at T.D. Williamson birdied the 17thhole to complete a 3 and 1 victory over 18-year-old Charlie Jackson of Norman, who will begin his freshman season at Abilene Christian this fall.

Voegeli navigated his first five matches on his own, but after losing the first hole of the finals and pushing his drive badly right, waived Tyler Hunt into his cart. Hunt moments earlier in the semifinals had been poised to defeat Jackson. He was 1 up hitting a 52-degree wedge from 117 yards over the canyon on the 18th hole at The Patriot, but hit a flyer that sailed over the green into trees and was never found. He lost that hole and the subsequent playoff hole with another lost ball, missing the chance to square off against his good friend and frequent four-ball partner in the finals.

There was a stunning reversal of fortune in Voegeli’s semifinal match as well. He trailed Jaxon Dowell of Edmond by a hole on the tee of the par-3 17th. Dowell pulled his tee shot left and part way down a hill leading to a bogey. Tied on 18, Dowell, who had hit nearly every fairway in five matches, pulled his tee shot left again and though he clambered into the canyon to pitch his second shot backwards, it again led to a bogey and sent Voegeli into the finals.

“That was really disappointing because I feel like I gave it away,” said Dowell, bound for the University of Oklahoma. “I missed my target a little left and it just kept going left. I had a great tournament and it was a lot of fun, but that was disappointing.”

Voegeli grew up in Muskogee and played four years for Missouri Southern (2007-11), but was burned out on golf after college and played only a few rounds for the next five years. It was at the insistence of Hunt that he started playing and enjoying the game again. The two teamed up to win the Tulsa Golf Association Four-Ball Championship in 2017 and have since played in numerous events at their respective clubs and around the state.

“Tyler really is the reason I’m here,” Voegeli said. “He got me started playing again.”

The two both decided to enter the State Amateur and joked when they saw the draw that the only way they would get to play each other was in the finals.

“I’m sorry I couldn’t hold up my end, but I’m so happy for Jamie,” Hunt said.

After surviving the match against Dowell, Voegeli, who said he hadn’t played two rounds of golf three days in a row since college, birdied four of the first seven holes against Jackson. However he bogeyed both par-5s and had a 3 up lead after nine holes. Jackson, a slender 6-foot-3 with room to grow stronger, came back with a birdie on the par-3 11th, then won the par-4 12th with a par to close within one.

Voegeli regained control with a 25-foot birdie putt on the par-3 13th, the same hole he aced in the quarterfinals Wednesday. Both players bogeyed the par-4 14th, at which point he told Hunt how tired he was.

“He told me I wasn’t tired and just needed to make one good swing.”

After driving in the fairway on the par-5 15th, Voegeli and Hunt collaborated on a crucial decision.

From 270 yards out, they first leaned toward laying up with a 5-iron. Then Voegeli decided to lay into his trusty 20-year-old Sonartec 3-wood, virtually the same decision Hunt had made that led to his quarterfinal victory Wednesday. Voegeli hit a beautiful fade onto the green for an easy two-putt birdie that put him three holes ahead with three to play.

A birdie by Jackson on 16 delayed stretched the match, but Voegeli’s 7-iron from 170 yards to 10-feet away on 17 sealed the victory.

“I certainly didn’t expect to win this, but I’ve been playing really well leading up to it and I thought if I just stick to my game plan and execute one shot at a time, I would have a chance to beat anybody,” Voegeli said. “It sounds cliché, but that’s the mindset I had in all six matches.

“I’m really grateful to Tyler for jumping in and helping me out. I know he was disappointed not to be in the finals. He’s a great friend and really the reason I’m playing golf today.”

“He played really well and I just had a couple of mistakes,” Jackson said. “I came in here just trying to do as well as possible and had a lot of fun. It was a good match.”

For Voegeli’s first time in the top amateur tournament in the state, it was a memorable run that neither he nor Hunt will ever forget.