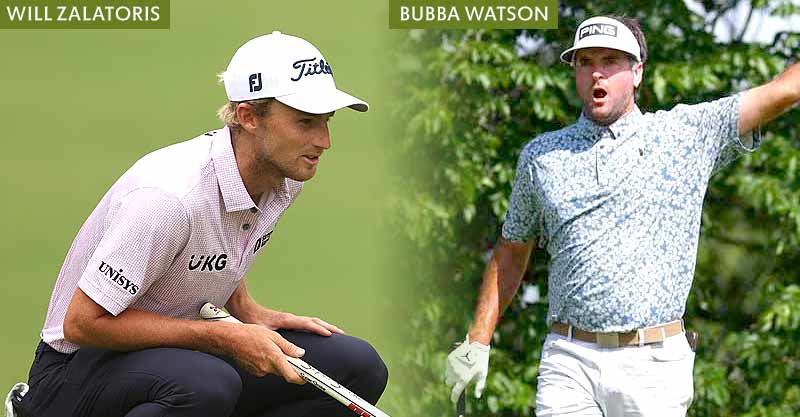 The second round of the PGA Championship was about one man. And then it wasn’t.

Will Zalatoris played brilliantly in shooting 5-under 65 to take the lead at the halfway point of the 2022 PGA Championship at Southern Hills at 9-under, one shot clear of  Mito Pereira of Chile, who shot 64. Justin Thomas is fourth at 6-under after a harder-earned 67 in the windy morning round, while Bubba Watson tied the course record held by Ray Floyd and Tiger Woods with a 7-under 63 to move into fourth at 5-under.

Former Oklahoma Sooner Abe Ancer shot 1-under and is tied with first-round leader Rory McIlroy and David Riley for fifth at 4-under.

But none of the leaders were the reason fans lined the first seven fairways 5-10 deep for hours prior to the 1:36 tee time.

No disrespect to the other two thirds of the marquee pairing either, but they weren’t there to see McIlroy or Jordan Spieth either.

No, everyone was there to see if Tiger Woods could will his mangled ankle and battered body into making the 36-hole cut. If you waited until the weekend to come out, your odds of missing him were too high.

When Woods birdied the 10th hole for the second consecutive day to move to 3-over, he was a shot inside the projected cutline. But then a pulled tee shot on the par-3 11th led to a double bogey, and suddenly he was a shot outside the line.

Seven holes to go in at least 1-under. Could he do it?

On the par-3 14th, he missed the green just right and hit a poor chip, but rolled in a 15-foot putt to save par to wild applause. He got up-and-down from a back bunker on 15 to save another.

Then, from 211 yards out on 16, he striped a 5-iron to 4 feet left of the cup and rolled that in for his fifth consecutive one putt. He had a stroke of breathing room at 3 over and that’s where he finished with pars on 17 and 18 to make the field for the weekend. “There’s a reason why you fight hard and you’re able to give yourself a chance on the weekend. You just never know when you might get hot. As I said, I’ve won tournaments being on the cut number. This weekend I’m going to have to go low. It’s going to be different. The wind is going to be coming out of the north. It’s going to be cooler.

“As I alluded to earlier, I’m hoping I can shoot a number like Bubba did today tomorrow. That’s where my mind is at right now. I’ve got to do some things physically to get myself there tomorrow and it will be a quick turnaround. That’s the reward you get for just making the cut. You get to tee off early the next day, and hopefully I can get it in. The weather is supposed to be a little more difficult and be a little more testy, and hopefully that’s the case. “

When the wind dropped in the afternoon, scores plummeted. Greens were slow and receptive because they were not mowed overnight due to the anticipated high winds early. Pereira, who earned his card in 2021 after earning a battlefield promotion from the Korn Ferry Tour for his three victories, poured in seven birdies. Zalatoris, who won the 2014 Trans-Mississippi Amateur at Southern Hills, made consecutive birdies on holes 11, 12 and 13 to spur his round of 65. Watson missed a 22-foot putt on 18 for a 62 after making nine birdies against two bogeys.

Justin Thomas had the best round in the windy morning wave with a 67 to move to 6-under.

The 23 players under par were a record through two rounds of any major at Southern Hills. Only five players finished under par when Woods won the 2007 PGA Championship at 8-under, and only eight when Retief Goosen won the 2001 U.S. Open at 4-under, five of those coming at 1-under.

The combination of slower greens, warm temperatures and most acutely no wind in the afternoon made for a scoring onslaught the likes of which has never occurred at Southern Hills. With possible rain overnight and a cold front switching the prevailing wind to the north, it will be interesting to see what occurs on Saturday.

“Slower greens obviously helps. It slows down the chips and everything, all the shots that you’re hitting in there,” Watson said after his nine birdie onslaught matched the 63s shot by Woods in 2007 and Floyd in 1982, both of whom went on to win their respective PGA Championships. “Makes the ball grab more because you have a little bit more grass on there to grab and spin shots.

“Without the heat, the cloud cover made it a little bit softer. But when that wind died down, you just felt like you had a chance to score. I’m not saying it was easy by any means. I just hit some putts, hit some shots that helped me — you know, my whole goal was to make the cut, so I was just trying to stay ahead of the cut line, and every time I made a birdie I just kept saying, that’s one more to the good.”

Talor Gooch put on a ball striking display for a second consecutive day, and his even-par 70 in the second round of the PGA Championship probably doesn’t reflect just how well he hit it.

As it was, he is at 1-under through 36 holes and tied for 17th. Viktor Hovland of Stillwater is a shot back after his second consecutive round of even-par 70 and tied for 24th.

For the second consecutive day, Gooch was the first group out in his wave. Mainly due to an ultra deliberate club pro Brandon Bingaman, his group was warned by PGA officials that it was being put on the clock just three holes into the round. And for the second consecutive day, his group was waiting on every hole after it made the turn and caught up to groups that had teed off on the other nine.

“I just got done talking to them (the PGA) about it,” Gooch said. “It’s just an anomaly, but this has happened to my group in the first two rounds in the last two PGAs. It adds a level of stress that’s not necessary. In my five seasons on the PGA Tour, I’ve never been put on the clock.”

Besides the early missed putts, Gooch had a stretch on 12-14 that could have been more productive. On the par-4 12th, he missed the green short from the middle of the fairway and couldn’t get up-and-down. After a 381-yard drive, he put his second shot on the 632-yard par-5 13th in the bunker over the green, and his eagle pitch rolled 18 feet past the cup.

On the 230-yard, par-3 14th, Gooch striped a beautiful tee shot with a 5-iron to within 6 feet, but could not convert the birdie. He made all pars coming in from there.

Like Gooch, Rickie Fowler had a one birdie, one bogey even par round Friday playing in the more blustery morning conditions. Players in that wave drew the worst of the weather on both days.

Hovland followed up both of his birdies with a bogey on the ensuing hole and couldn’t make a surge into red numbers.

Not sticking around for the weekend is Matthew Wolfe, who had four bogeys and two double bogeys on his final nine holes to shoot 77 and finish at 13-over, ahead of just a couple of club professionals.

Former Cowboy Alex Noren shot 76 after opening with a 70 and missed the cut. Local favorite John Daly shot 76 and finished at 8 over.