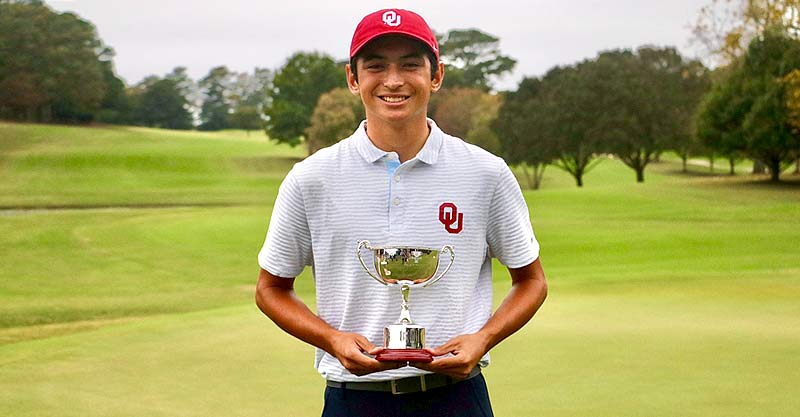 ATLANTA –  Patrick Welch claimed medalist honors, as the junior paced Oklahoma in the stroke-play portion of the East Lake Cup on Monday, as the top-ranked Sooners claimed the tournament’s No. 1 seed heading into match play.

Welch (67, -5) birdied the final hole of the par-72 East Lake Golf Club to take a one-shot lead into the clubhouse. The junior from Providence, R.I., sunk birdies on his opening three holes to jump out to an early lead before bogeying three of the final five holes of the front nine. But Welch would respond, as he closed the gap on teammate Quade Cummins on the back nine, collecting birdies on holes 11, 13, 14 and 18 to win the stroke-play championship. The win marks the first of Welch’s career and fourth top-10 finish in three seasons.

“I thought I played really well today,” Welch said. “I started hot with those three birdies, and then hit a little rough patch later on. I knew that I would need a few more birdies if I wanted to have a chance, and fortunately I found them down the stretch.”

The Sooners (278, -10) won the stroke-play qualifying event by seven shots, holding off Pepperdine (285, -3) who began to close the gap on the back nine. The now No. 1-seeded Sooners tallied a field-high 24 birdies across the 18 holes to claim the top seed. They’ll tee off against the No. 4-seeded Texas Longhorns in the semi-finals of the East Lake Cup on Tuesday. The Big 12 foes squared up at the Big 12 Match Play Championship in early October with the OU head coach Ryan Hybl’s squad winning 3-2-1.

“I’m not surprised at all about how our guys played today because that’s where are our expectations are,” Hybl said. “But to have everyone coming down the stretch with Quade, Patrick and Jonathan all vying for the championship, that was pretty cool. As a team, any chance you get to win a golf tournament is fun for us.”

Tying for runner-up on Monday was redshirt senior Quade Cummins, who has notched three top-10 finishes in the fall season. Cummins (69, -3) led the field thru 16 at 4-under-par but bogeyed the final hole to finish two shots behind Welch. The Weatherford, Okla., product continues to show why he’s considered one of the best players in the country, entering match play ranked No. 9 in the PGA Tour U rankings.

All-American transfer Jonathan Brightwell carded a 2-under, 70, to grab a share of fourth on Monday at East Lake. The redshirt senior led the field with 14 pars and has tallied only one bogey over his last 36 holes, dating back to the last round at the Maridoe Collegiate Invitational.

Brightwell was followed on the leaderboard by Logan McAllister (72, E) who finished T11. McAllister has had a breakout fall season, winning the title at the Big 12 Colonial Preview and finishing tied for 17th at Maridoe. The junior from Oklahoma City shined on East Lake’s final five holes, battling from 3-over-par to even-par to close the day.

Welch and McAllister, both juniors, have now collected wins this fall against some of the best competition in the country, giving Sooner fans a sneak peek of what’s to come.

“I’m really proud of Logan and Patrick,” Hybl said. “They’re are the next crop of guys for us, and they’re stepping into their leadership roles now. Seeing Logan win at Colonial and how he did that – without giving away any shots and making the putts that mattered – is exactly what I saw today with Patrick. It’s just been really nice to watch the continued growth in their games, and it’s going to give them that much more confidence to know that they are the next group of leaders for our program.”

Rounding out the Sooners’ lineup was All-American Garett Reband whose 2-over, 74, gave him a piece of 15th. He’ll square off with Texas’ Piecerson Coody tomorrow afternoon.

The East Lake Cup was founded in 2015 to provide the nation’s top teams with an avenue to compete in an NCAA-style event. The Cup features the top four teams on both the men’s and women’s side, as teams play 18 holes of stroke play, followed by a semifinal and final of match play on Tuesday and Wednesday.

Using the final rankings from the 2019-20 season, the East Lake Cup chose then-No. 1 Pepperdine, No. 2 Oklahoma, No. 3 Texas Tech and No. 4 Texas on the men’s side. Through three fall events, the Sooners have overtaken the ranking’s top spot after winning at Colonial and finishing in third at the Big 12 Match Play Championship and Maridoe Collegiate Invitational.

The Sooners tee off at 11:10 a.m. ET in the semi versus No. 4-seeded Texas, with live coverage starting on the Golf Channel at 3 p.m. ET.

“When we played Texas at the Big 12 Match Play Championship it was different because there were six matches then, as opposed to the normal five,” Hybl said. “But at the end of the day, there isn’t that much of a difference because our guys know that if we go play good golf that we’re going to have a chance to win, and if we don’t then we’re going to get beat because Texas is really good. They’re one of the best teams in the country, and our guys know that.” Texas Tech freshman JP Roller of Jenks was named the 2020 Tom Cousins Award recipient which was presented by the East Lake Cup on Monday night.

Tom Cousins purchased the East Lake Golf Club in 1995 with the goal of resurrecting the property in order to use the profits to develop the local East Lake community. His goal was to use the game of golf to improve the lives of those who were financially and educationally disadvantaged. Roller, who is competing in the East Lake Cup this week for the Red Raiders, is the first Texas Tech player to earn the honor.

As a service award, Roller was awarded the Tom Cousins Award through his commitment to his community back home in Tulsa. He described why service is important to him by saying: “I have served in a service club at my school called “Beta Club.” This was an organization that did service projects throughout the Tulsa community. Two years ago, I invested my time into the Leadership Links with the AJGA. In that event, I chose a charity called College Golf Fellowship and raised over $20,000. In 2019, I was awarded the Jerry Cole Sportsmanship Award presented by the AJGA at the Rolex Tournament of Champions banquet for my community service and charity funding. These activities are just the highlights of what I have given back to the community, as it has been a number one priority in my youth.

“Without golf, I would have never been able to raise over $20,000 for an outreach that shares the good news of Jesus to college golfers. These examples are portions of my life where I have used the game of Golf to impact others in my community. There are numerous ways where one can shed light on someone or something through Golf. Mentorship for the younger generation is a massive part of being a student-athlete.”

Twenty years ago, Cousins founded the East Lake Foundation. As a charitable organization, the foundation has been dedicated to helping families rebuild and helping children reach their highest potential. Based on the framework Cousins utilized to rebuild the East Lake community from one of despair to a national model of redevelopment, the East Lake Foundation employs a holistic approach to community revitalization, “incorporating mixed-income housing, cradle-to-college education and community wellness.

The Tom Cousins Award is presented annually to an outstanding male and female golfer who epitomizes the standards of the East Lake Foundation, both excelling academically and demonstrating extreme engagement in his or her community.