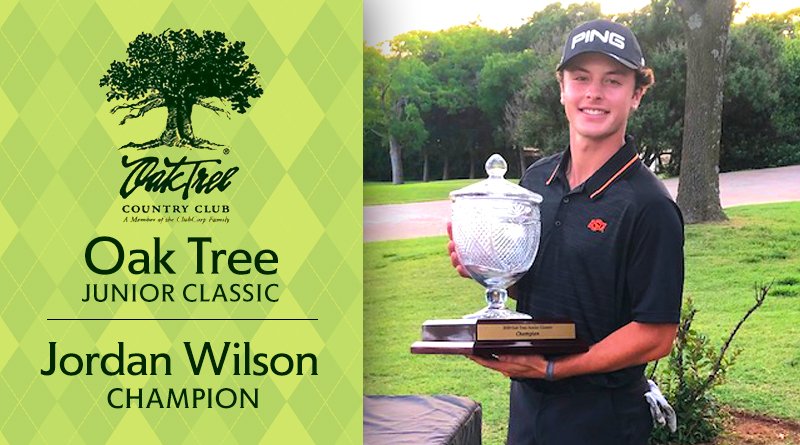 Jordan Wilson of Edmond is all about making the most of his opportunities.

The Edmond North junior may have missed the opportunity to defend his Class 6A individual state championship when the COVID-19 pandemic wiped out high school spring sports. But he is undefeated in two events since competition resumed, first winning the Spring Series Championship on the Oklahoma Junior Golf Tour, then Tuesday shooting 5-under to win the 36-hole Oak Tree Junior Classic by one shot over Drew Goodman of Norman.

The Classic, organized by Tosh Hays, director of junior golf at Oak Tree Country Club as well as coach at Oklahoma Christian School, and Kevin Wagner of Oak Tree, had 120 boys from around the state competing on a spectacular sun drenched afternoon with no wind and mild temperatures. It was a joyous return to competition for many.

Wilson, decked out in Oklahoma State colors in honor of his verbal commitment to the Cowboys, shot 6-under 64 in his morning round at Oak Tree Country Club West, then a 1-over 71 in the afternoon and early evening on the East Course to hold off Goodman. Playing two groups ahead, Goodman shot rounds of 66 on the West and 70 on the East.

“I looked at this as an opportunity to make up for not having our state championship, kind of like a state championship for all the classes,” Wilson said. “I took it seriously and prepared hard for this. I really wanted to win it.”

Third place went to Jaxon Dowell of Edmond after even-par rounds of 70 on both courses. It was the two-time defending Class 3A champion’s first event since October, and though his ball striking was pure, he struggled to take advantage by missing numerous reasonable birdie attempts.

Dowell will be the defending stroke play and match play champion when a majority of this talented field reassembles down the road in Edmond for the OGA Junior Boys and Girls Championship June 1-4 at Kickingbird Golf Course. Wilson will be the defending champ in the OGA State Amateur Championship July 21-23 at The Patriot in Owasso. He won the event in 2019 with a 1-up victory over a player he greatly admires, Austin Eckroat of Edmond and OSU.

“There was some rust definitely,” Dowell said. “I hit the ball fine, but didn’t score well. I feel pretty good about my game though and being ready for the Junior and trying to defend my title.”

Wilson is a member across the road at Oak Tree National, where he is more likely to find a game with the club’s host of young professional talent than many members his age. He lives, however, just off the seventh fairway on the West Course, and admitted he and friends have snuck on from time to time usually to be run off (gently) by Director of Golf Devin Davenport.

Wilson was 7-under and three shots ahead of Goodman and six clear of Dowell after both he and Dowell made birdies on the par-4 second hole of the East course. Dowell inched closer with a birdie on the par-5 fourth hole, then a par to Jordan’s bogey on the fifth. But Jordan birdied the seventh and 13th holes while Dowell went through an extended run of missed putts to again lead by six, and even his double bogey on the par-3 14th was survived. He made solids pars on the final four holes to keep his lead.

All the top contestants said they were extremely glad to be back competing and looking forward to the OGA Junior Amateur Championship and beyond. Dowell has signed with the University of Oklahoma while Goodman is an OU commit. Along with Luke Morgan of Guthrie (Baylor) and James Roller of Tulsa (Texas Tech), most of the state’s top juniors will be competing against each other in Big 12 competition for years to come.

“You know with this group that any time you win an event you’ve really earned it,” Dowell said. “We’re all making each other better players.”

Tied for fourth at 141 were William Falleur of Muskogee, Shane Herlihy of Edmond and Ben Stoller of Owasso. Complete results are here.