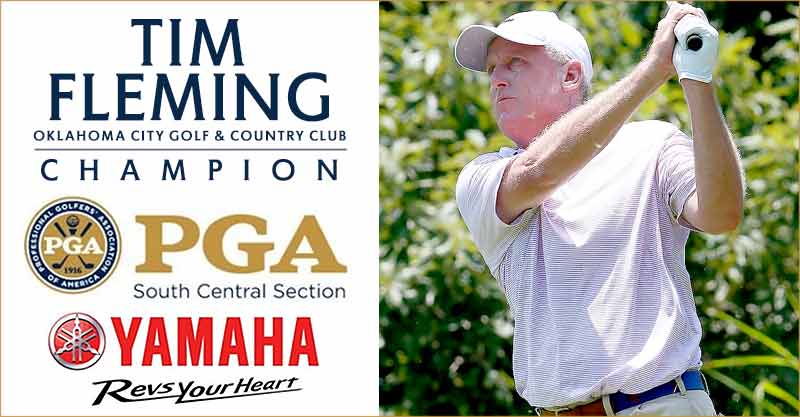 Tim Fleming has experienced so much success in his playing career, it’s hard to keep track of all the accumulated victories.

The Director of Golf at Oklahoma City Golf & Country Club and former Oklahoma State golfer won the Yamaha South Central Section Match Play Championship Wednesday morning at Quail Creek Golf & Country Club, hitting a 7-wood from 223 yards on the final hole to 3 feet to break a tie and escape with a 1-up victory over Mark Meacham, the director of golf at The Golf Club of Oklahoma in Broken Arrow.

Fleming has won eight match play titles and more than 20 section “majors” in his career and they never get old.

“I just love to play, love to compete,” Fleming said. “I just enjoy trying to play my best. Today was a great match, a lot of momentum swings. Mark is a really good player.”

Meacham, who came to the Golf Club in 2020 after a distinguished career at Hallbrook Country Club in Kansas City, is a native Oklahoman and a University of Oklahoma graduate. He advanced to the final with a 2 and 1 victory over Mike Elafros of The Greens Country Club in Oklahoma City, while Fleming reached the championship match with a 3 and 2 victory over Austin Peters of The Territory.

Fleming won the first two holes of the championship match with pars, but gave one back with a 3-putt on the third hole. He regained his 2 up lead through 11 holes, but Meacham evened the match with a brilliant tee shot on the difficult par-3 12th to 3 feet for birdie and by stuffing a wedge on the 15th hole close for another birdie.

The two went to the final hole tied. Meacham drove into a fairway bunker, escaped but then hit his third shot over the green. Meanwhile Fleming’s clutch second shot was nestled three feet from the hole. After Meacham’s chip failed to go in for par, the birdie putt was conceded.