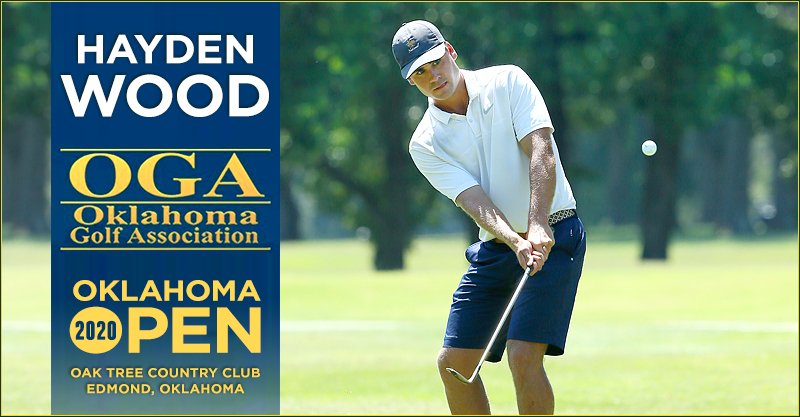 It was an opening round for the ages Thursday in the Oklahoma Open on the East Course at Oak Tree Country Club in Edmond.

One pairing featured 18-year-old Jaxon Dowell, one of the state’s top juniors, along with 73-year-old Gil Morgan, who first won this event in 1981, 21 years before Dowell was born.

But the round for the ages came in one of the afternoon’s final groups. Hayden Wood, whose father Willie Wood is a two-time Open champion (1990, 1995), took full advantage of the soft greens and light winds to tie the competitive course record with a 9-under 61.

The nine-birdie, no-bogey round matched 61s previously shot by Max McGreevy in 2017 and John Bizik in 1997. Yet it only gave Wood a one-shot lead over Chase Hanna of Leawood, Kan., who went out early and posted an 8-under 62.

Hayden, playing with Willie watching from a golf cart, made three birdie putts of 20 feet or more, the final one on the par-3 14th after a 8-iron tee shot on the difficult 175-yard shot over a fronting pond. With perhaps thoughts of a sub-60 round starting to creep in, Wood said he stayed aggressive on the final four holes but wound up with solid pars on each.

“With the scoring conditions like they were, I knew there were going to be low scores and I just wanted to stay aggressive and push it as low as I could,” Wood said.

Wood came in after playing recent events on the All Pro Tour, where his former collegiate teammates at Oklahoma State Sam Stevens, Zach Bauchou and Brendon Jelley have combined to win four events this summer. Wood has played well but hopes this is his week to finish on top.

Bauchou shot a first-round 65 and Jelley came in with a 72.

The Open is graced this year by the presence of not only the Hall of Famer Morgan but two current PGA Tour players in Robert Streb and Rhein Gibson.

Streb, whose last round in the Open was in 2011 when he won the second of two titles (2009 was the first), shot a six-birdie, one-bogey round of 65 and is tied for sixth. His father David, who lives near the course, served as his caddie, with his wife and two young children cheered him on, something they can’t do this year on the PGA Tour.

Gibson shot a 68 in his return to the event. He won the championship in 2010. The other previous champion in the field, Casey Fernandez of Durant, got off a great start with a 65.

Dowell got off to a shaky start, playing the first eight holes in five over. His ball striking skills were in evidence but his putting never caught up and he finished with a 75. Morgan bettered his age by two shots with a 71 and both enjoyed the pairing, also shared by Britt Pavelonis of Harrisburg, Mo., who made some incredible pars and birdies after wayward drives en route to a 68.

“It was the most fun I’ve ever had shooting a 75,” Dowell said. “He was great to play with and you can really learn a lot watching his iron play. And when he gets out of position he gets right back. The first hole he hooked his drive into the bunker, then hit a hybrid from 200 plus to 10 feet!”

“Jaxon hit some great drives and second shots, but he didn’t get much out of his round today,” Morgan said. “I’m sure he was disappointed in his putting. But that’s golf. Tomorrow hopefully they’ll go in for him.”

It was the first competitive event of the year for Morgan, who won seven times on the PGA Tour and 25 times on the Champions Tour. But the Oklahoma Golf Hall of Famer, arguably the most successful Oklahoma golfer in history, didn’t take long to show he can still play. He feathered an iron to 4 feet for a birdie on the seventh hole, then rolled in a 30-foot downhill birdie on the par-4 ninth.

“Those guys hit it so far past me it’s a joke,” Morgan said. “But I hit some good shots and the irons were pretty good. It was fun to be back out there.”