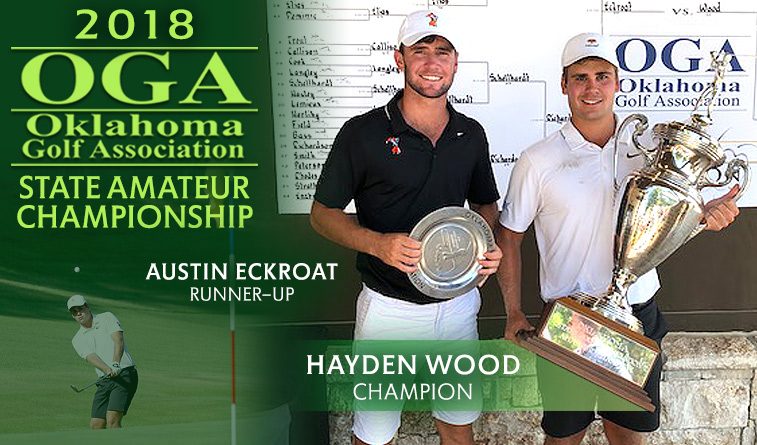 OWASSO – Oklahoma State teammates Hayden Wood and Austin Eckroat have been playing similar schedules this summer, so when Wood learned his Edmond buddy had signed up for the Oklahoma Golf Association State Amateur, he followed suit.

When they saw they were seeded on opposite sides of the bracket, both egged the other on to meet them in the finals.

That they did, where Wood prevailed 3 and 2 at the end of a long and exhausting three days of two matches per day in searing heat at the superbly conditioned Patriot Golf Club.

“As soon as we saw we were on opposite sides of the bracket, we thought we would have a chance to meet in the finals,” Eckroat said. “I think the two guys that should have been in the finals were there. But it didn’t quite go my way.”

“We were hoping it would shake out this way,” Wood said. “I’ve known Austin since he was eight years old. We play golf all the time together and we’re good friends too.”

Temperatures were right around 100 degrees and heat index at 108 when Wood hit an 8-iron from 180 yards to inside a foot for eagle on the par-5 16th hole to close out the match. It capped a four-birdie, no bogey performance in the championship match after he had defeated Cody Burrows of Chickasha 2 and 1 in the morning semifinal.

Eckroat, who led qualifying with a 62 at Lincoln Park and had made 28 birdies in his previous five matches, made three birdies in the first seven holes, but also lost three balls in the first eight by hitting into hazards. He compounded the errors by three-putting the par-3 ninth to fall one down at the turn.

Wood reached the 605-yard par-5 10th in two for an easy birdie to go two up. Eckroat responded with a birdie on the par-3 11th, but then hit his tee shot wide on the par-4 12th and was facing bogey when Wood holed out a bunker shot for a birdie.

From there, both birdied the par-5 15th and Eckroat missed a 15-foot eagle putt on 16 before conceding.

“I told myself on the tee that I was going to make eagle and end it,” Wood said. “I knew he would make at least birdie and I didn’t want it to go on. “

“I didn’t hit it nearly as good in the final match and take advantage of the holes I have been throughout the week,” Eckroat said. “The holes I was killing people on I was hitting in the hazards and losing golf balls. Just out of position.

“But I’m happy for Hayden. He played well and deserved to win.”

Wood said it was a relaxed final match, as he and Eckroat play numerous practice rounds together at Karsten Creek and also play matches against each other in the summer. Both had returned from a tournament in South Carolina on Sunday, played a practice round Monday and then six matches in three days. Both will head from here to the Pacific Coast Amateur and later hopefully play in the U.S. Amateur, where Wood has qualified and Eckroat is an alternate.

There was no tension related to the fact that Eckroat was a starter for the OSU national championship team while Wood was one of five talented players to sit out. Wood said speculation that he had considered not returning for his senior season was overblown and he was looking forward to joining Eckroat in pursuit of something no OSU team has ever accomplished, which is a repeat national championship.

“I thought I was coming back the whole time,” Wood said. “I’m not ready to go professional yet. I just need to keep getting better and better and be ready next summer.

“It was just a bad timing thing. I started playing bad at the wrong time. But you just have to keep going forward. If you’re not beating the guys on your team, you’re not going to beat tour players. I’m looking forward to another year at school and I think if I just keep working on the things I’m working on, I’ll be ready to go next summer.”

While Eckroat steamrolled four of his five opponents to reach the final, Wood played a steadier game, making bunches of pars and the occasional birdie or eagle and taking advantage of his opponent’s miscues. He was in most danger two down through 10 holes to 59-year-old Mike Hughett in the quarterfinals before the 21-time OGA winner had a couple of bad drives on 12 and 14.

“There was some pressure in that match,” Wood laughed. “If I had lost to a guy older than my dad (PGA Tour veteran Willie Wood) and who has a day job. I would have caught some flak from the guys. He played good and had his mistakes and I did the same.”

Burrows, who will return for his senior season at ORU, said his ball striking was shaky in his semifinal match and not up to the standards he set in his four impressive victories earlier.

Richardson, who works at Golf Galaxy in Tulsa, will turn professional shortly. He had his chances against Eckroat, particularly after making a 55-foot birdie putt on the ninth hole to even the match, then taking his first lead with a birdie on 10. But he faltered on the par-3 13th and the par-4 14th with wayward tee shots into trees that gave Eckroat a 2 up advantage.