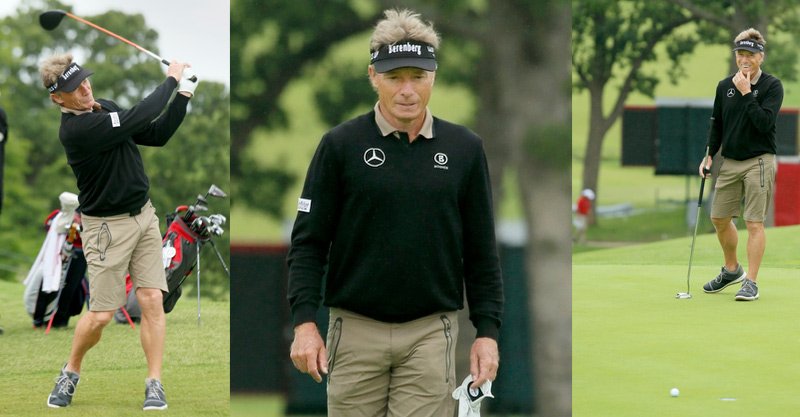 Always difficult greens and tougher bunkers at Southern Hills Country Club have increased the challenge for 63-year-old Bernhard Langer as he prepares for Thursday’s first round of the $3.5 million dollar Senior PGA Championship, but it has also toughened the resolve of golf’s true professional ageless wonder.

“I still love the game of golf,” Langer said after his practice round Wednesday. “I love to compete and when I don’t, it’s time to leave, but that time has not come yet. I still feel very competitive with these guys and I look forward to the week.”

Langer, who has won 41 events including 11 majors since joining the senior circuit, was here for the 2001 U.S. Open and remembers the tough, multi-sloped greens and false fronts which caused approach shots to tumble down the steep Tulsa hills, but said the Gil Hanse-designed bunkers were new to him.

“This course puts a premium on hitting the fairways and being accurate on your approaches to the greens so that it doesn’t spin back. I feel like I’m playing very good now, but the players are always getting younger and longer off the tee, so I have to play flawless golf.”

That was the case for fellow senior Phil Mickelson in capturing the PGA Championship over the weekend at Kiwiah Island Golf Resort, making him the defending champion in Tulsa next year for the 2022 PGA Championship.

It was a result which excited Langer but certainly did not surprise him.

“I’m happy for him, of course, but I’m smiling because I’ve been saying for 12 years somebody from the senior tour would win a major championship” Langer said. “It was just a matter of time before it would happen and I’m thrilled it finally did.

“It’s a misconception that you can’t get better as you get older. Maybe that is not the case in soccer or tennis because of all the running, but it’s certainly the case for golf as you get 40-50-60.”

Name an age related record for professional golfers 50 and older and its likely Langer either owns it or rapidly closing in.

Most years in a row with a tournament win on the PGA Champions Tour, Senior Tour career grand slam, most money won, oldest player to make the 36-hole cut at the Masters tournament. 2000-2021 Charles Schwab Cup point’s leader. All Langer.

Most pro wins ever for a golfer 50-and-and older, Langer only trails Hale Irwin by four, but as he likes to say, it probably only a matter of time.

Langer still works harder and smarter than most, and he won’t be surprised if he’s near the top of the leaderboard on Sunday afternoon. No one else should be surprised as well.