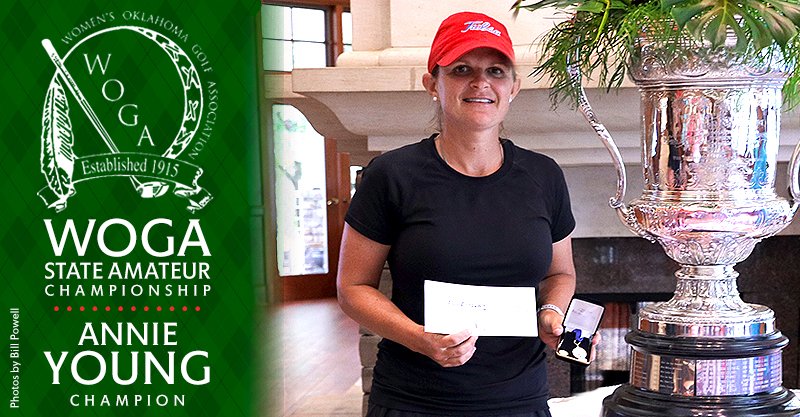 Riding a hot putter, Young ended the match on the par-4, 14th after sinking an 18-foot putt. It was one of seven one-putts for Young, who until a practice round last Friday had never played The Golf Club of Oklahoma.

“I felt like honestly it was one of those days that everything looked like it was going in,” Young said.

In a match that was over in two hours and 15 minutes. Young was 3 up after four holes against the 19-year-old Hermann, who had eliminated Taylor Dobson, one of Young’s top players at TU, the day before in the semifinals.

“(Hermann) is a heck of a player, I was fortunate to get a lead early and I think that was a key for me,” Young said. “It’s always hard to play catchup in match play.”

“I was a little nervous because she is really, really good,” said Hermann, who also was playing in her first WOGA State Amateur. “So I just tried my best and she was dropping birdies and there really wasn’t much I could do.”

Young said she was also nervous heading into this week. Young was an accomplished Big 12 player at Oklahoma State (2001-05) and has LPGA Tour experience. But, it has been a few years since she has played in any type of tournament.

She spent the last two and a half weeks preparing for the State Amateur.

“Coming in, I was just excited to play tournament golf. It’s been a long, long time,” she said. “I’m kind of surprised that I won to be honest with you.”

Dobson, however, wasn’t surprised. She played several rounds with Young leading up to the State Amateur, including a practice round at The Golf Club of Oklahoma last Friday.

“She always makes putts like that,” Dobson said of Young’s putting Thursday. “Her putting is probably the best part of her game.”

Dobson and Young each said they would have enjoyed competing against each other in the championship match.

“I really wish I could have played her,” said Dobson, a fifth-year Hurricane senior. “I was hoping for that.”

Thursday’s performance capped an impressive week for Young. On Tuesday, she defeated Oklahoma City University golfer Lauren Behnken 5 and 4 then eliminated Emma Shelby of Bartlesville in Tuesday afternoon’s second round. On Wednesday, she sailed past Faith Hopkins of Bartlesville 6 and 5 in the quarterfinals before dispatching Janet Miler of Catoosa 5 and 3 in Wednesday afternoon’s semifinals.

“Once I get into match play, I feel like I’m pretty good at match play,” Young said.

Young adds the WOGA amateur crown to her trophy case. She is a two-time Utah Women’s State Amateur Champion, the 2002 USGA Women’s Amateur Publinks Champion and was a member of the 2004 Curtis Cup Championship Team.

Young was an All-America golfer at Oklahoma State and later coached the Cowgirls as well as coaching at Cal State Northridge and Colorado State before coming to Tulsa.