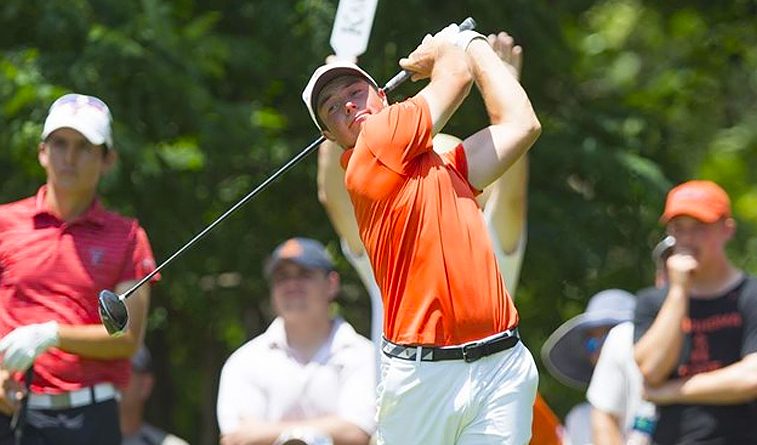 The wind finally blew, Karsten Creek dried out and top-ranked Oklahoma State wound up right where it expected all along, atop the leaderboard after 72 holes of stroke play on its difficult home course in the NCAA Men’s Golf Championship.

Oklahoma, after a shaky star reminiscent of its first nine holes in the Big 12 Tournament, dug in its heels and finished fourth, setting up a potential Bedlam showdown Tuesday afternoon at 2:20 p.m.

First top-seeded OSU must get past second-ranked Texas A&M, which secured the eighth spot by one shot over Vanderbilt. Oklahoma will face Auburn, which it was paired with Monday. Duke, which shot 306 Monday to fall eight shots behind OSU, will face Texas, while Texas Tech meets Alabama. OSU’s match begins at 7:50 a.m. on the first tee while OU starts at the same time on the 10th tee.

The Cowboys had their highest score of the four days at 295 but still managed to pull away and finished at even-par, eight shots ahead of Duke. Matthew Wolff and Kris Ventura each shot even-par 72, with Wolff earning a tie for seventh at 3-under to lead OSU. Also earning top-20 finishes were Viktor Hovland, tied for 11th at 1-under and Austin Eckroat, tied for 19th at 1-over.

Oklahoma was led by Garett Reband, who had shot 80-78-78 in the first three rounds causing OU coach Ryan Hybl to consider replacing him in the lineup for the fourth round. Reband more than rewarded Hybl’s faith by shooting 72. Brad Dalke and Grant Hirschman each shot 73 and the Sooners counted a 77 by Blaine Hale.

Augusta’s Broc Everett claimed individual medalist honors with a birdie on the first hole of a playoff against Auburn’s Brandon Mancheno.

Everett and Mancheno finished the final round of stroke play knotted at the top of the leaderboard after the latter birdied No. 18 and the former parred the hole later in the evening. Their 7-under 281 sets the course record for a 72-hole score at Karsten Creek.

In the playoff, the left-handed Mancheno got up and down to par the hole and put the pressure on the Augusta senior. Everett was up to the task though, as he sunk a 15-foot birdie putt from the back of the 18th green to clinch the individual national championship.

Hybl credited his entire team for digging in and halting the early slide. Reband was 1-under before a bogey at the 16th hole. He then made a miraculous bogey on17 after driving left into the trees and tall weeds, failing to get out with his first recovery shot, then punching out and leaving himself a long fourth shot which he pulled to the far left edge of the green. He then rolled in about a 50-foot putt to save bogey.

On 18 he blew his second shot 30 yards over the green with a 3-wood, but hit a great pitch from the rough and rolled in the birdie putt.

“The pins were tougher than they’ve been all week but our guys dug in their heels and made some key birdies when we needed to,” Hybl said. “It’s a credit to their toughness, their hard work and their belief system. My man Garett makes about a 50-footer for the best bogey of the week and follows it up with a great birdie on 18.”

Dalke was 4-over but battled back with birdies on holes 11 and 12. He said the pressure of finishing in the top eight was taking its toll on the Sooners and all the competitors.

“I think this is the most pressure-filled day in college golf,” Dalke said. “You try to say you’re just going out there and try to play your best and not worrying about everything else, but in all reality, everyone out there is worried about that cut line. It’s always going to creep in your head a little bit, no matter how hard you try to push it out. I was nervous the last three holes. Those are tough holes, and to be able to finish par-par-par, and I know the other guys dug down and finished well, too. It’s just a really pressure-filled day, and to be able to get into the top eight, I feel like this releases off our shoulders and now it’s a whole new tournament. It’s time to go grind it out.

While Hybl was thrilled with his team’s fortitude and toughness, OSU coach Alan Bratton was equally pleased with way his Cowboys responded to the more difficult conditions.

“I’m really pleased with the day, we showed a lot of fight, especially on the back nine,” Bratton said. “The first goal for the week was to finish on top of the stroke play. We got that taken care of, so now we move on to match play.

“We’ve very familiar with Texas A&M and have played with them in several events. That will be a good match up. They’ve had a good year and we’ll need to be on our game, but I promise you we’ll be ready.”

Texas A&M has finished in the top 3 of 10 of 13 tournaments this year and won its home regional, one of a school record six victories. It’s top player is junior Chandler Phillips, who is ranked No. 7 by Golfstat, but actually finished last among the Aggies five players at the NCAA. Brandon Smith shot 74-70-70-73 to tie for 11th at 1-under.