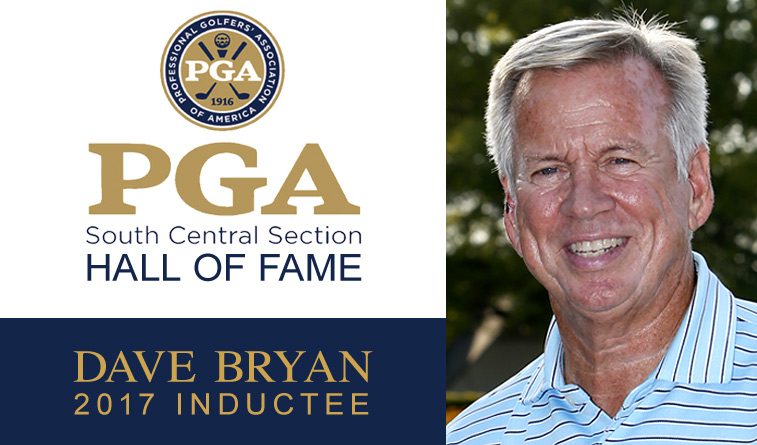 Dave Bryan expects an emotional response when he hears his name called Sunday night, inducting him into the South Central PGA Hall of Fame.

Bryan has worked as a golf professional in the section, which includes Arkansas, Oklahoma and southern Kansas, for the vast majority of his outstanding career, dating back to his first job as an assistant to Joe Walser at Oklahoma City Golf & Country Club in the early 1970s.

Bryan will be inducted into the South Central Section Hall of Fame Sunday evening during the section’s annual awards dinner at The Doubletree Hotel in Tulsa. Greg Bray of Terradyne Country Club in Wichita will be honored as the section Professional of the Year, succeeding Cary Cozby of Southern Hills, who went on to be named the PGA of America’s National Professional of the Year in 2016.

Bryan estimates about 30 of his former assistants have gone on to be head professionals or general managers, including Cary Cozby and his son David Bryan, who is now the director of golf at Cedar Ridge Country Club in Broken Arrow.

“I’ve been very fortunate,” Bryan said. “I’ve worked around a lot of great pros that have been very helpful to me. I didn’t invent many things, but I had my eyes and ears open and I took a little bit of this and that from some great professionals.

“It’s fun when you see all the guys that have gone on to success in the business. To see them work hard and see their dreams come true like mine did is very gratifying.