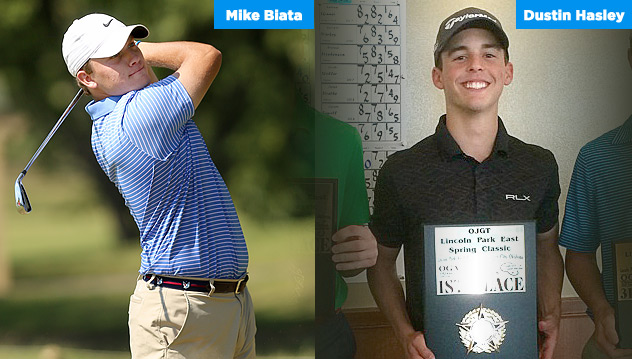 TULSA, Okla. – The Oral Roberts men’s golf team took advantage of the November signing period and added two new golfers, including Mike Biata, who will join the team in the spring semester. Dustin Hasley will join the Golden Eagle squad as a freshman in the fall of 2017.

Originally from Owasso, Biata will transfer to ORU after a semester at Chattanooga. In high school, he won 24 tournaments in a five year span, including the 2015 state championship. He was an all-conference selection three times and was named to the all-conference academic team as well. Biata earned medalist honors at the 2015 and 2016 regional tournament and was ranked second overall on the OJGT in 2015 and qualified for the 2015 Junior PGA Championship.

“Mike is a great kid that is going to push the current boys,” said ORU Coach Lance Watson. “He can flat play and we are really pleased that he is transferring back home after struggling this semester. He was highly recruited last year and I believe once he settles in, has the ability to explode and become an integral part of what is happening here. He has a superb short game and brings a gritty attitude every day. We are looking forward to helping him become the player he wants to be.”

Hasley will join the Golden Eagles after his senior season at Piedmont High School, where he is a 4.0 student and held a 72.02 stroke average for the 2016 season. He was the Spring OJGT Tournament champion and tied for first at the 5A State Championship. Hasley is a three-time state qualifier, a three-time all-city selection and was voted the best athlete in Piedmont. Hasley was also recruited by Oklahoma, Wichita State, Drake, Colorado and others.

Biata and the current members of the Golden Eagle squad will start spring action February 17 as they travel to Palm Springs, California, for the Desert Intercollegiate.

For the latest information on ORU men’s golf, follow @ORUAthletics on Twitter or go to www.ORUAthletics.com. Fans can also receive updates on the team by downloading the Golden Eagles Front Row App at ORUAthletics.com/frontrow or in the App Store.