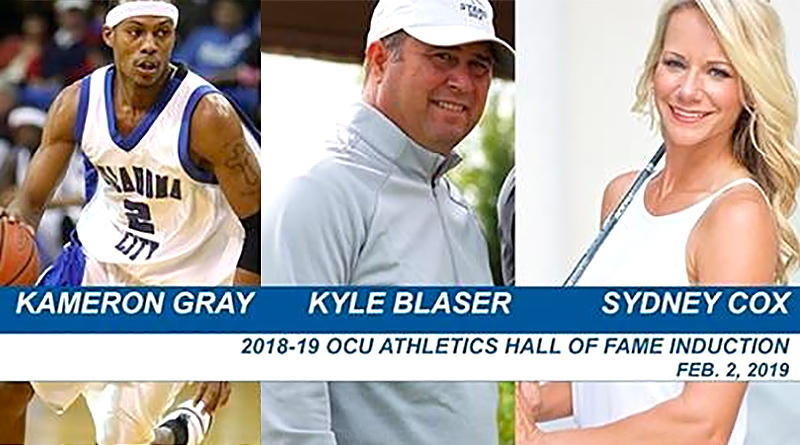 The 2018-19 OCU Athletics Hall of Fame induction class will be celebrated at a luncheon 11 a.m. Feb. 2 inside the Great Hall of the Tom & Brenda McDaniel University Center.

“The Hall of Fame is the highest honor that we have in our department,” OCU athletic director Jim Abbott said. “We are grateful for the contributions that Sydney, Kameron and Coach Blaser have made to help build our tradition of success. We look forward to inducting these three deserving individuals into our Athletic Hall of Fame.”

In 2017-18, Oklahoma City took its 11th national title in May in Silvis, Ill. Four OCU golfers collected all-tournament honors as the Stars established a program record for a 72-hole score and erased an 11-stroke deficit after the first round. The Stars snagged their fourth consecutive conference championship in the SAC Championships in April at Gaillardia Country Club in Oklahoma City. OCU seized seven tournament victories while posting a single-season team record scoring average last season.

Blaser has been inducted into the NAIA Hall of Fame and the GCAA Hall of Fame. He has twice guided the United States’ top junior players in international competition.

“Three people kept me staying here,” Van Aswegen said. “The first one was Coach. He always spoke about family. He always welcomed me and made me feel at home. Coach helped me and developed my skills. I played in some of the worst weather. That made me a lot tougher, just those experiences.”

Cox captured the 2009 NAIA women’s golf individual championship. She will be inducted into the NAIA Hall of Fame as part of the 2018-19 class. She is the first women’s golfer to take the honor.

Cox posted a 78.03 scoring average with four tournament victories. Cox closed her college career with a 76.19 stroke average in 26 rounds as a senior in 2008-09. She is tied for the career record with four eagles. Cox aided the Stars to four SAC titles and two regional crowns.