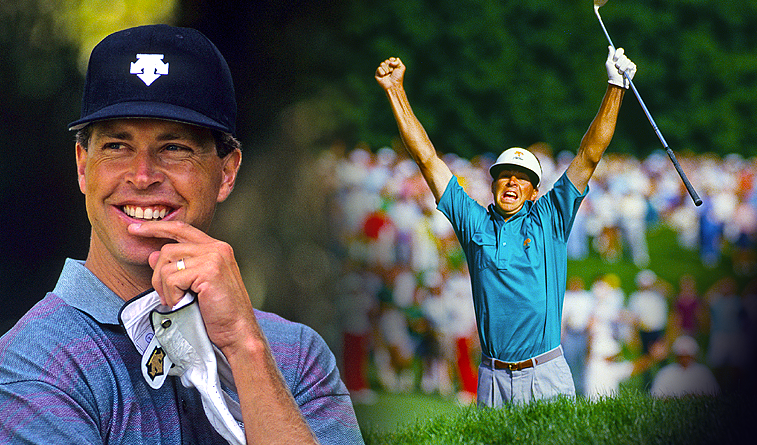 On the 72nd hole of the 1986 PGA Championship at the Inverness Club in Akron, Ohio, Bob Tway pulled out his sand wedge and promptly used it to harpoon the “Great White Shark.”

In one of the most magical moments in golf history, Tway holed out for birdie from a greenside bunker and slayed Australian shark enthusiast Greg Norman, who would go on to be inflicted with multiple scars while battling to win major championships throughout his Hall of Fame career.

For Tway, the sequence was part of a magnificent season during which he posted four victories, 13 top-10 and 21 top-25 finishes that resulted in his peers selecting him PGA Tour Player of the Year.

The PGA wasn’t the only major championship where Tway excelled in 1986. He tied for eighth in that year’s Masters, five strokes behind 46-year-old legend Jack Nicklaus, who captured his sixth Green Jacket. In that year’s U.S. Open at Shinnecock Hills (N.Y.) Golf Club, Tway was the first-round leader and trailed by two strokes entering the final round. He double-bogeyed the par-5 16th and bogeyed the 17th to again tie for eighth, five strokes behind winner Raymond Floyd.

In just his second full season on the PGA Tour, the 27-year-old Tway already had accomplished more than most pro golfers achieve in a lifetime. These achievements helped make Tway an obvious choice for the Oklahoma Golf Hall of Fame. Oddly enough, as these prolific performances accumulated 31 years ago, Tway said he didn’t fully comprehend what he had accomplished.

“At the time, you don’t realize it all, to tell you the truth,” Tway admitted. “I knew it was great to win a major and I was playing against all these great players, but I was still so young and naïve. I guess I didn’t know any better.”

Tway remains the only OSU golfer ever to win a major championship on the PGA Tour, this despite the Cowboys having 10 national championships (eight under Holder) and 55 more All-American selections than any other Division I program all-time.

Asked what the key is to excelling in major championships, Tway chuckled and said, “Oh, who knows, really. It’s funny, the reason I changed my swing so much is because I never thought I drove the ball well enough to win a U.S. Open. And looking over my career, I finished in the top 10 in the U.S. Open more than any other major (four times). It doesn’t make any sense.

As the 2017 induction date approaches on Oct. 1 at Oklahoma City Golf & Country Club, the soft-spoken Tway quietly acknowledges a remarkable career that has included eight victories and $18.5 million in official career earnings on the PGA and Champions tours. Tway also was a three-time, first-team All-American (1979-81) at Oklahoma State and won the 1981 Fred Haskins Award as collegiate Player of the Year.

Even with all his early success, which included six PGA Tour victories by 1990, the relentlessly competitive Tway sought further greatness and began tinkering with the swing that had catapulted him into one of the world’s elite players. For this, Tway makes no apology.

“Even though I messed with my swing, I was always trying to get better, so I can’t fault myself for that,” Tway said. “Obviously, if I knew then what I know now, I wouldn’t have messed with my swing because I would have known what to do. I guess that’s part of digging it out of the dirt, trying to figure it out.”

Further success eventually would come for Tway, though it came in ripples rather than with a tidal wave reminiscent of 1986. Tway’s first four victories on the PGA Tour came in a span of six months and 22 starts. His next four tour victories required 17 years and 468 starts. From 1992-94, Tway managed just two top-10 finishes and missed 37 cuts in 75 starts.

In an effort to recapture his winning form, a determined Tway returned to his collegiate days and sought help from OSU coach Mike Holder.

Asked if he was surprised Tway tinkered with his swing despite his tremendous success in 1986, Holder boldly confessed, “I always thought it was a lot my fault. Maybe we kind of had a culture on our team that encouraged tinkering with your golf swing. In a positive way, I was thinking that would make you better. As I’ve gotten older, I’ve come to appreciate that definitely is not the case. Once you’ve reached a certain level, you kind of need to accept that your golf swing is what it is and live with it.

“It’s not going to determine whether you’re going to be a great player or not. That’s all going to come with how you handle the emotional side of the game, the strategic side of the game and the way the game should be played, which is in your subconscious with very little thought. All that realization came when seeing him (Tway) struggle with his game. Maybe I was a calming voice at a good time to remind him of how good he was and is, and getting him back to playing the game the way he did when he was 15 years old. That was plenty good enough then and certainly would be plenty good enough today.”

Tway ended a five-year victory drought by winning the 1995 MCI Classic at Hilton Head Island, S.C. He also had eight top-10 and 15 top-25 finishes in 27 starts that season. As a result, Tway was voted PGA Tour Comeback Player of the Year.

“I was happy for him,” Holder said. “I only had one stipulation and that was he couldn’t tell anyone that I was helping him because I wanted him to understand that it wasn’t me. It was him. A player needs to take credit for his success because that confidence they build is invaluable, especially in the tough times, so you cannot share that with someone else.

Tway and Holder have a unique relationship that spans 40 years. While tutoring Tway, no longer was Holder the notorious taskmaster he personified as OSU’s golf coach and now as the school’s athletic director.

“He was a totally different person than he was as a coach,” Tway said. “He was totally different when you got out of school than when you were in school. In school, he just tried to make things tough because he wanted to know who was going to throw in the towel (as a player) and who wasn’t.”

When Tway finally survived PGA Tour Qualifying School after three straight failed attempts after turning pro, it was Holder who served as his caddie.

“Coach would say, ‘You know what? We’re just going to swing smooth, we’re going to walk slowly, we’re going to do all the right things and by the last day you’re going to be hitting it better than the first day,’ ” Tway said. “Sure enough, on the last day, I’m like 7-under through the first 12 holes. It was like it was all coming true. Coach was always a great influence. He was always there to talk. He was so positive. We might not have been talking about golf. Maybe it was about life or whatever. He was just a different person.”

Holder said a key element to Tway’s success was simply getting out of his own way.

“I think that’s a good example of how the conscious mind can get in the way of great golf,” Holder said. “It has nothing to do with his ability to play on the PGA Tour or his inability to play in the Qualifying School. He just put too much pressure on himself. He made it too big of a deal instead of just going out there and playing golf the way he knew how to play it as another round of golf. It just overwhelmed him. And after you miss (earning your tour playing privileges), it makes it even more challenging the next year, but he’s not the only one to ever experience difficulties at Qualifying School.

“I also think I would have had a better impact on a lot more players than I did, but that’s all hindsight. It’s easy to look back and get a better answer than what you had at the time. Everything we did, we did for the right reasons. We had all good intentions and we never were short on work ethic. We just really didn’t understand the way the game should be played at the highest level.”

“He was instrumental with the golf swing itself,” Tway said, “But the time he caddied for me, it was more mind games than anything else.”

When Tway won the 2003 Bell Canadian Open, he recaptured his playing privileges at The Masters the following season and asked Holder to carry his bag at Augusta National. After Tway tied for 27th in the 2004 Masters, he asked Holder to caddie for him the following week in the MCI Heritage Classic, where Tway had won nine years earlier.

Holder happily speaks at length about Tway and his entire family – wife, Tammie (a college sweetheart who Tway married in 1981), son Kevin (a 2013 Web.com Tour winner who played collegiately at OSU from 2007-11 and currently is enjoying his best season on the PGA Tour) and daughter Carly (a successful artist, model, actress and dancer based in Los Angeles).

“I’m proud of the kind of man he is, the good friend he’s been to a lot of people, the children he’s raised, the son who played golf here at Oklahoma State University, just his whole family and the way he represents our institution and golf in general,” Holder said of Tway. “He’s just a credit to the human race. A great guy.”