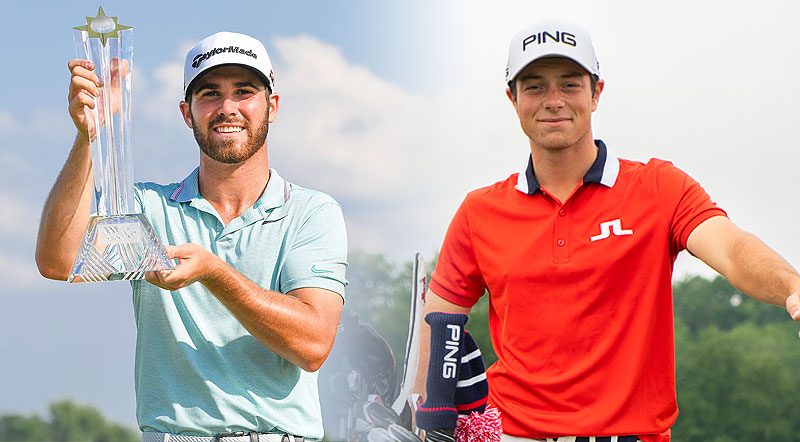 Here in Oklahoma we’ve been following their exploits for the past three years, and now the entire golfing world is excited to see what Viktor Hovland and Matthew Wolff will do this week.

Hovland has actually been installed as the betting favorite for this week’s John Deere Classic, while Wolff is the nation’s rock star coming off his victory in the 3M Open with the dramatic eagle on the final hole.

Wolff has secured his status for the 2020 season and will be able to participate in the playoffs this year. Howland is still working on his. Although his FedEx Cup points are not published until he is an actual PGA Tour member, Hovland has earned 121 non-member points thus far after tying for 13th at the 3M Open thanks to a closing 65.

The 121 would put him at 180th on the current FedEx Cup Points list. Currently number 150 for conditional status is Jim Knous with 223 points and 125 for full status is Ryan Blaum with 284 points. Hovland has earned enough points to be able to compete in the Korn Ferry Tour playoffs in which 25 PGA Tour spots will be awarded, but he could still earn full playing status for 2020 with a victory or a few top-10 finishes in his remaining starts.

Oklahoma State coach Alan Bratton has watched both players closely since he recruited them both to Stillwater and has been thrilled but not shocked at what they’ve accomplished already.

Reached late Wednesday as he rode a train back to his Paris hotel after watching the same European boys championship where he discovered Hovland four years ago, Bratton said as long as both players remain true to themselves, the sky is the limit on what they can accomplish.

“They’re such cool kids,” Bratton said. “They are genuine, they work hard, are nice guys and super talented. Both of them gave everything they had to Oklahoma State and it was important to them. The whole world has seen that now and they’re going to be great ambassadors for the university.

Bratton said some of the social media frenzy with Wolff has gotten out of hand and he liked Hovland’s response to being installed as the betting favorite this week.

“He gave them a line from a movie, “stay off the weed,” Bratton said. “It’s kind of silly.

“Their best chance to win is to just keep doing what they’ve been doing and stay true to themselves. It’s been very cool to see how much success they’ve been having already.”