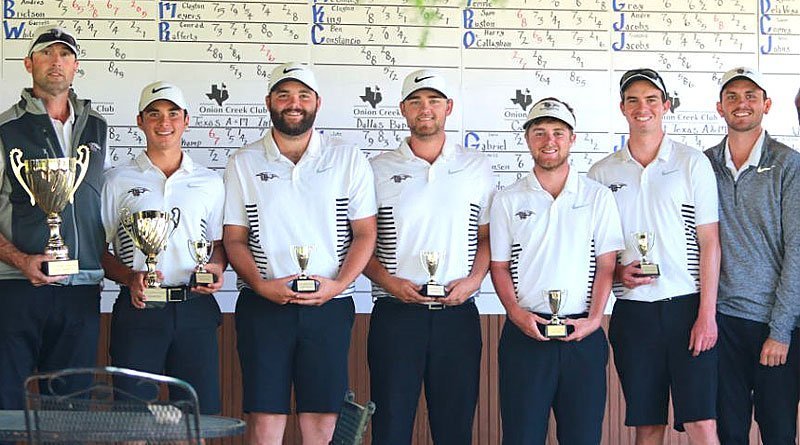 AUSTIN, Texas (March 26, 2019) – Down 11 shots to a top-10 team when Tuesday began, Oklahoma Christian’s odds of winning the St. Edward’s Invitational didn’t seem good. But three rounds at or under par allowed the Eagles to close that deficit.

Andres Brictson fired a 3-under-par 67 on Onion Creek Club’s North Course to secure his first collegiate individual win, Juan Pallach contributed a 68 and Trevor Norby added a 70 as the 13th-ranked Eagles posted a final-round score of 280 and tied No. 23 Midwestern State (Texas) for the title in the 16-team event at 849 (9-over).

It was OC’s fourth win during the 2018-19 season, the 63rd in program history and the Eagles’ first since taking the title in their spring opener, the Fujikura Invitational at Shadowridge Country Club in Vista, Calif. It might well have been their most improbable win of the season, considering the uphill climb they faced Tuesday.

No. 10-ranked St. Mary’s (Texas) led Western New Mexico by six shots and OC by double digits after the first two rounds, but the Rattlers shot a team score of 293 to come back to the field a bit, and the Eagles took advantage. OC led by four shots midway through the round and ended up locked in what became a four-way race, as Midwestern State posted the day’s top team score of 276.

Twice, OC lost the lead – once to St. Mary’s, once to Midwestern State – but both times the Eagles rallied. They made up a final shot over the last two holes – on a birdie on the par-5 No. 18 by Brictson – to forge the tie. St. Mary’s finished two shots behind in third, while Western New Mexico was fourth, four shots further back.

Meanwhile, Brictson, a sophomore from Merida, Mexico, battled all day to keep the lead, which he held a share of entering the round. He built a three-shot lead through 12 holes on the 6,530-yard course and while two Midwestern State players – Jake Doggett (who shot a 64) and Garrett Leek (67) – both made a run to pull within one shot late in the round, they fell just short.

Brictson’s birdie on No. 18 extended his lead to two shots and he finished the tournament at 5-under 205, with Doggett, Leek and Jake Stevenson of St. Mary’s tied for second. Stevenson had entered the round tied with Brictson and Joaquin Arguelies of Dallas Baptist (Texas), who ended up tied for seventh in the 84-man field.

It was the second individual win in as many weeks for the Eagles, as Norby recorded his first collegiate win last week in the Broncho Invitational at Oak Tree Country Club’s East Course in Edmond, Okla. Brictson is the 21st OC player to win an individual title since the university revived the men’s golf program in 1999.

Norby tied for seventh in the St. Edward’s tournament, finishing at 1-over 211. He recorded four birdies Tuesday, helping him overcoming a triple bogey on the par-4 No. 4. Pallach’s 69, which also included four birdies, put him at 21, tied for 16th.

The Eagles will have one more regular-season tournament, the Dallas Baptist Invitational next Monday and Tuesday at Hackberry Creek Country Club in Irving, Texas, before the Heartland Conference Championship, to be played April 14-16 at Slick Rock Golf Course in Horseshoe Bay, Texas.

Rogers State finished ninth overall at 35 over for the tournament.

The Hillcats moved up the team leader board as Edwin Blomander fired a 66 in the final round including five birdies and an eagle and finished tied for 18th along with teammate Aidan Gavey.

2 for the final round. Chaves finished at +24 for the week and in a tie for 72nd overall.