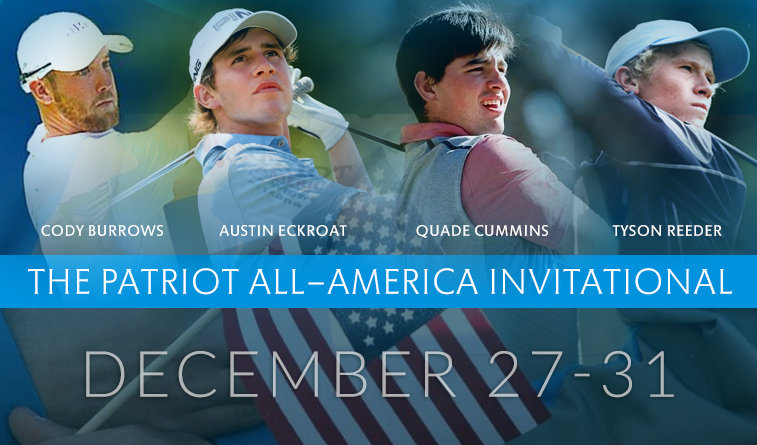 PHOENIX, Ariz. (December 14, 2017) – Reigning NCAA Individual Golf Champion and the number two ranked amateur in the world, Braden Thornberry leads an impressive field of top collegiate golfers who will play in the 2017 Patriot All-America Invitational presented by the Valley Toyota Dealers. The tournament, considered one of the top amateur golf events in the country, will be played at The Wigwam Golf Club in Litchfield Park, Ariz., December 27-31.

A field of 84 PING All-America golfers from all three NCAA Divisions, NAIA and NJCAA rankings as well as from U.S. Military Academies and universities outside the world will compete in a 54-hole, stroke-play competition on The Wigwam’s famed Gold Course. Competitive rounds for the 2017 Patriot All-America will be played December 29, 30 and 31 with a champion crowned at approximately 4 PM on New Year’s Eve.

What separates the Patriot All-America from other collegiate golf tournaments is participants play for more than themselves or their school. Each golfer honors a fallen or severely injured soldier by carrying a golf bag bearing the name of that soldier. Before the tournament, participants receive a card with the soldier’s story, so they can be familiar with who that person was, what they represented and how they were killed or wounded in action. At the conclusion of the tournament, the golf bags are shipped to players’ schools and auctioned with all proceeds benefitting the Folds of Honor Foundation, which provides post-secondary educational scholarships for children and spouses of military service men and women killed or disabled while in active service.

According to the latest World Amateur Golf Ranking, Thornberry (ranked 2nd) of Ole Miss is the highest ranked player in the field, with Alejandro Tosti of the University of Florida (9th), Sahith Theegala of Pepperdine (47th), Cooper Dossey of Baylor (52nd) and Jin Cheng of USC (68th) the other top 70 players to commit. The Men’s World Amateur Golf Ranking system ranks the top male amateur golfers in the world on the basis of their average performance in counting events over a rolling cycle of the previous 104 weeks.

Now in its 7th year, the Patriot All-America Invitational is a collaboration between the Arizona Golf Association, JDM Partners and the Golf Coaches Association of America in partnership with the Folds of Honor Foundation. Current PGA TOUR stars who have played in The Patriot All-America Invitational during their college careers, include: 2017 US Open champion Brooks Koepka (2011), 2017 PGA Championship winner and FedEx Cup champion Justin Thomas (2011), Patrick Rodgers (2011), Daniel Berger (2012) and Bryson DeChambeau (2013). 2016 Patriot All-America champion Cameron Champ recently turned professional and is now playing on the PGA TOUR.

The winner of the 2017 Patriot All-America Invitational will receive a sponsor exemption into the Web.com Tour’s 2018 Air Capital Classic played June 21 – 24 at Crestview Country Club in Wichita, Kansas.

For more information on The Patriot All-America Invitational presented by the Valley Toyota Dealers, visitwww.patriotallamerica.com.