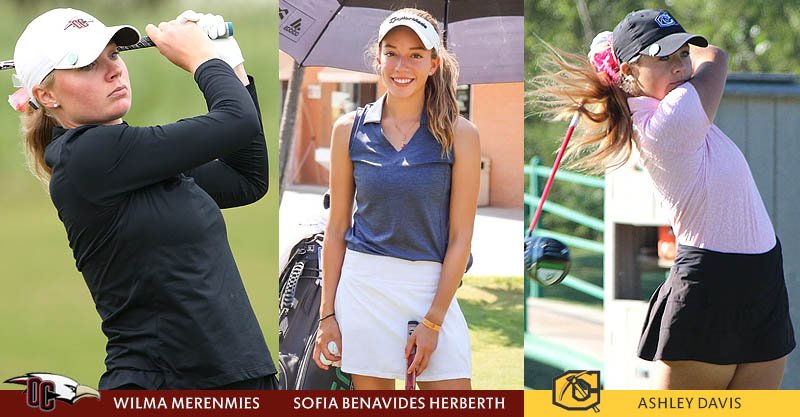 LAWTON – The Cameron women’s golf team played a one-day, 36-hole tournament on Monday at the Lawton Country Club, finishing in third place with a score of 606. Oklahoma Christian placed fourth. Midwestern State won the event at 592, followed by Angelo State at 603 and host Cameron took third in the nine-team field at 606.

Originally scheduled to be played on Monday and Tuesday, the Aggies’ annual Oklahoma Intercollegiate was pushed to a one-day event with the threat of storms looming on Tuesday afternoon in Lawton.

Cameron had a strong opening round during the morning session, shooting a 298, just one stroke back of Midwestern State. The Aggies then shot a 308 in the second round.

Ashley Davis led Cameron with a tie for sixth at 150 after consecutive rounds of 75. Ellie Fellers placed ninth and Iona Roska finished in 10th. Fellers had one of the best scores of the first round, carding a 73 and followed that with a 78 for a 151 total score. Roska was one stroke back with a 152 after improving from her first round 79 with a 73 in the second round. Gerdur Ragnarsdottir shot  71-83 for a 154 total, tied fo 11th.

MSU’s Juanita Gomez took home the individual medalist honor with a 1-over 143, one stroke ahead of ASU’s Maria Sierra Sanz.

For Oklahoma Christian, Wilma Merenmies and Alexandria Bennett each posted a top-five individual finish. OC posted team rounds of 307 and 302 for a final score of 609, 17 shots behind the winner.

The soggy conditions made the course play considerably longer than its posted 5,975-yard length but Merenmies (who took third) and Bennett (who placed fifth) persevered.

Merenmies, a sophomore from Raasepori, Finland, shot a 1-over-par 72 in the first round, then a 73 in the second round. At 145, she was just two shots behind the winner, Juanita Gomez of Midwestern State, and one shot behind Maria Sierra Sanz of Angelo State. It was the second-highest individual finish of Merenmies’ collegiate career and her sixth top-10 showing overall.

Bennett, a junior from Plano, Texas, posted a first-round 77, then moved up the leaderboard from 11th to fifth thanks a 72 in the final round that left her at 149 for the tournament. The top-10 individual finish was the eighth of her career.

Competing as an individual, OC sophomore Alyssa Wilson of Yukon shot rounds of 80 and 76 and tied for 14th at 156, giving her her fourth top-20 collegiate finish.

The Eagles will wrap up the fall portion of their 2021-22 season on Oct. 25-25 in the Tulsa Cup, to be hosted by Rogers State at MeadowBrook Country Club in Tulsa.