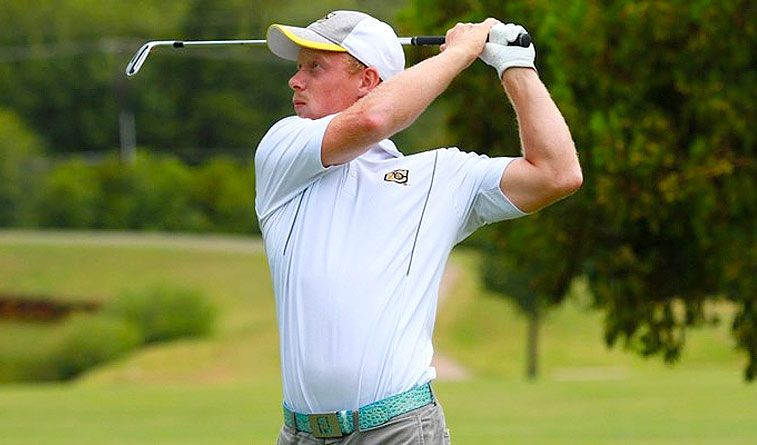 DANVILLE, Ark. – Following one round at the Dave Falconer Classic, the Cameron men’s golf team is tied for first with Tiffin University after each shot a 296 on Monday at the Chamberlyne Country Club.

As a team the Aggies shot 8-over par with Daniel Nielsen leading the way tied for third place individually after shooting one-under in his opening round. Nielsen carded a 71 and had 13 pars and three birdies.

Shooting 1-over was Dario Gabriel who is presently tied for tenth place after carding a 73 and making a team high four birdies. Mac Rochell recorded three birdies and is tied for 15th place after shooting 74.

Weston Ward carded a 78 to tie for 46th and currently tied for 86th place is Niels Sorensen after shooting an 85 in round one.

Lindenwood’s Ryan Dyck sits atop the individual leaderboard after shooting 69.

Northeastern State is in striking distance, tied for fifth at 300 and only four shots back of the lead.

“We put ourselves in position to win our second tourney in a row, which is good, and that is what we have always been about here,” said head coach Scott Varner.  “Putting ourselves in position to win going into the final round of any tournament and then you have to go out and play with great courage, mentally manage your game, and discipline your emotions. Hopefully we can do that.”

“We have had a truckload of second, third, and fourth place finishes over the past three or four years. We have to finish and get the W. This would be a big one as it has NCAA Championship implications and will be the last time many of will see each other in the Central Region before NCAA selections are made so there are big implications.”

Navid Majidizadeh paced NSU with a 72 and is tied for sixth on the overall individual leader board. Marc Johnson is two shots back and tied for 15th place.  Tate Williamson and Garrett McDaniel are tied for 39th place with matching 77s, and Ty Shelnutt carded a 78, tied for 49th place.

“Really proud of freshman, Navid Majidizadeh, his solid play today kept us in it, and helped put us in position to win tomorrow,” said Varner.  “Marc (Johnson) was also solid for us today and I really believe he is on the verge of being back mentally and confidence wise.”

Southwestern Oklahoma State, led by Stefan Idstam’s 1-under 71, is in seventh place at 301. Ids tam is in third place individually.Rogers State is in eighth place at 304, led by senior Hagen Barmasse with a 72. Alex Marsh and Eric Moore are tied for 29th as the duo each shot 76.