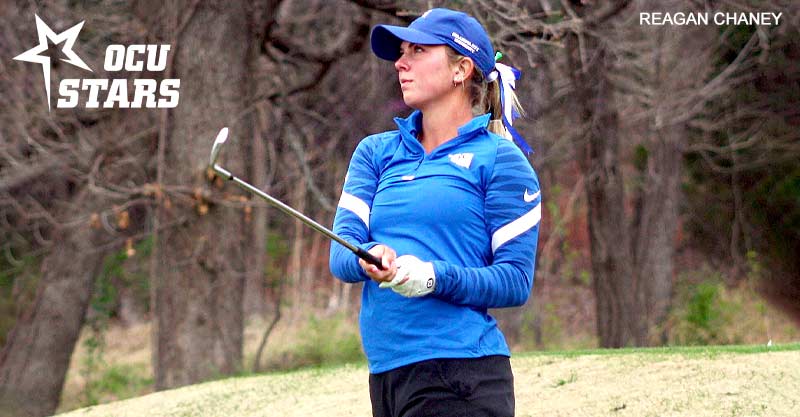 Oklahoma City, ranked No. 1 in NAIA women’s golf, forged a two-shot lead as a team. Chaney, a freshman from Ardmore, Okla., owned a two-stroke edge in the individual race.

The Stars posted a 290 on the par-72, 6,000-yard West Course. Sixth-ranked Southeastern (Fla.) came in second place with a 292, while ninth-rated Texas Wesleyan produced a 302. Lincoln Park hosts the NAIA Championships on May 24-27.

Chaney assumed the lead with a charge on the back nine, shooting a 39-30–69. Chaney made three birdies and an eagle on the last nine holes, burying her first eagle as a collegian on the par-5, 500-yard 13th hole. Chaney stood as one of three golfers under par through 18 holes with her seventh round below 70 this season.

Chaney and Morgan Palermo of the Stars held spots among the top five after round 1, while four OCU golfers were in the top 10. Palermo, a freshman from Parker, Colo., delivered a 38-35–73 to be tied for fifth. Palermo knocked in three birdies.

Susie Maxwell Berning entered the World Golf Hall of Fame March 9 in Ponte Vedra Beach, Fla. Berning blazed a trail for women’s athletes by competing on the OCU men’s golf team during the 1960s, becoming the first female student-athlete in school history. Berning went on to the LPGA Tour starting in 1964 and took 11 victories, including four in major events.

The final round of the Susie Maxwell Berning Classic starts 8:30 a.m. Tuesday in a shotgun start at Lincoln Park.