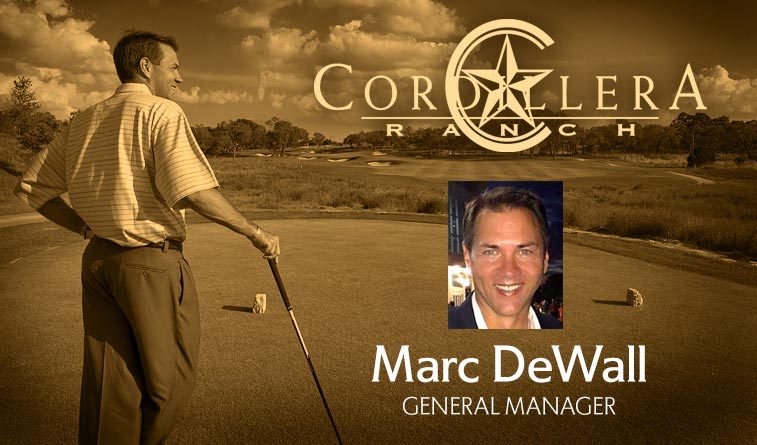 DeWall was previously the director of golf at Cordillera Ranch since 2006. A recipient of the Southern Texas PGA’s coveted Golf Professional of the Year award, DeWall has been the catalyst behind Cordillera’s Ranch award-winning golf experience. During his tenure as director of golf, the Jack Nicklaus Signature Golf Course was named the Golf Course of the Year by the National Golf Course Owners Association. Cordillera Ranch has also been ranked in the top-7 in the annual Dallas Morning News Texas Golf rankings since 2009, including a fourth-place showing in the 2018 poll.

“We’re thrilled to promote Marc to this well-deserved new position as general manager,” says Charlie Hill, president and chief operating officer for DH Investments, developer of Cordillera Ranch. “Marc is highly respected by our staff members, industry peers and the many members who have gotten to know him. We are confident that his leadership and management skills will flourish in this new role as he leads Cordillera Ranch in the coming years.”

Prior to Cordillera Ranch, DeWall was the director of golf at The Dominion Country Club in San Antonio. Throughout his illustrious career in the golf industry, DeWall has served on numerous committees for the Southern Texas PGA and has been a two-time president. His understanding of the Cordillera Ranch culture and member experience expectations uniquely prepared him for the general manager position.

“Cordillera Ranch is a very special place and I have been fortunate to be a part of it since 2006,” says DeWall, who has worked in the private club industry for 30 years. “Mentoring individuals and growing talent both play a vital role in moving the club forward and I am proud of my track record in this area. I look forward to truly focusing on constantly elevating the member experience in all facets, and we have a great leadership team at Cordillera Ranch that I know is committed to the same.”

Situated 30 minutes northwest of San Antonio, Cordillera Ranch boasts 0.25-acre villas, one- to 10-plus acre estates, including valley-view, golf course and Guadalupe River frontage, as well as hilltop home sites. Cordillera Ranch’s seven on-site, resort-style amenity clubs – Golf, Tennis and Swim, Spa and Athletic, Social, Rod and Gun, Equestrian and River – are all available under one membership. This trailblazing model continues to attract a wide array of buyers from throughout Texas and the U.S.

The Cordillera Ranch clubhouse was recently named the Most Beautiful Clubhouse in Texas by Architectural Digest. Community honors continue to roll in as well, as Where to Retire Magazine named Cordillera Ranch one of the “50 Best Master-Planned Communities in the U.S.,” and San Antonio Magazine tabbed it one of the best neighborhoods in the area.

Cordillera Ranch continues to grow at an impressive pace. Since Cordillera Ranch’s launch in 1997, nearly 800 homes have been completed (with more than 1,200 lot sales). At final build-out, Cordillera Ranch will total approximately 2,500 homes and preserve 80% of the land in its natural Hill Country state.

Amenities opening in 2018 include the new Vista Visitor’s Center, housing the offices of Cordillera Ranch Realty, DH Investment Company, Pasadera Builders and the Cordillera Ranch POA administration. Additionally, the community is in its first phase of construction of the Lodges at Cordillera Ranch, boutique accommodations for property owners and club members’ guests. The initial phase of Lodges will be comprised of two units with a total of 10 available rooms.