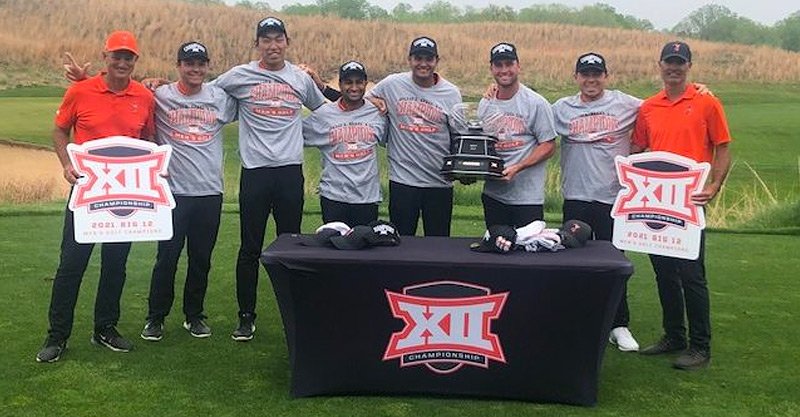 By Ken MacLeod
and wire reports

HUTCHINSON, Kan. – At the end of a 72-hole stress test, it was the No. 3 Oklahoma State Cowboys celebrating their 11th Big 12 title on a plateau above the 18th green at Prairie Dunes Country Club. The No. 1 Oklahoma Sooners watched glumly a few yards away, giving credit where it was due but determined for a different outcome down the road.

After several wild swings in momentum on the final holes, the Cowboys’ 7-under final round was good for a one-shot victory over the Sooners, who had finished with a 6-under final round, and by two over Texas. The three teams had entered the final 18 holes tied and the battle was intense for 18 holes, with the Sooners playing in the group ahead of OSU and Texas.

Oklahoma State seemed to pull away only to have to count a triple bogey on the par-5 17th by Eugenio Lopez-Chacarra, who still finished with a 1-under 69 but entered that hole at 4-under and looking to add to it. Similar disasters befell OU and Texas on the 18th hole. OU’s Logan McAllister came to the 18th at 4-under but after driving right into the tall native grass suffered a double bogey. And Texas Pierceson Coody did him one better, taking a closing triple bogey that knocked the Longhorns out.

“Those things will happen at Prairie Dunes,” said OSU coach Alan Bratton. “It’s built for that. It’s an amazing course. Fortunately we had Austin and Bo Jin at the end to clean things up at the end of the lineup.”

“We just weren’t quite good enough this week,” said OU coach Ryan Hybl. “When you play 72 holes and it comes down to one shot, we talk all the time about how important each shot is. Give credit to Alan (Bratton) and his guys for pulling it out. I thought we hit the ball pretty good overall but we didn’t make many putts. We had big numbers like everybody, that’s what this course will do when the wind is whipping around. But this will give us good motivation going forward, there’s a lot of golf to be played.”

“It’s a great victory for our guys who have really come together and grown over the course of this season,” Bratton said. “There were a lot of great teams and great players in this tournament, but the star of the show was Prairie Dunes. What a great venue for us to be able to play this on.”

The outcome came down to the 18th hole. Jin birdied the par-5 17th hole and recorded a par at the closing hole to finish off a 2-under 68 and seal the team victory.

The freshman tied for second place at 3-under 277 and finished just one shot off the pace of tournament medalist Cole Hammer of Texas. After opening with a birdie at the first, Jin made the turn in even-par 35. He would play the inward nine without a bogey and carded birdies at the 14th and the 17th en route to his 2-under score.

Jin was joined in the top 10 by junior Eckroat who fired the round of the day, a 5-under 65, to finish alone in fifth place at 282. Eckroat lit up the front nine with four birdies against zero bogeys. After posting his first bogey of the day at the 11th he would birdie three of the next six before closing his round with a bogey.

Facing an unfamiliar north wind on 18, Eckroat also lost his drive right, then put his second shot in a greenside bunker. He managed to get on without rolling it past a dangerous pin placement and two-putted. After working hard on his chipping the previous evening, he chipped in on the ninth hole and improved greatly on that aspect of his game from the previous rounds.

“To beat those guys (OU and Texas) just shows us we have a really good team,” Eckroat said. “You can’t fake your way around this golf course. This is one of my favorite courses in the country, definitely in the top five I’ve played.”

Chacarra moved into a tie for 10th place at 289 after closing with a 69, which included five birdies.
Chacarrra was joined at 289 by sophomore Aman Gupta, who posted a closing 71. Freshman Jonas Baumgartner closed with a 73 to finish at 290 and tied for 16th place.

“We had great contributions from all five guys in this event,” Bratton said. “And what a great final round from Austin. I’m really pleased with the performance this week by all of them and that was a lot of fun.”

Quade Cummins shot a final-round 66 for OU to tie for second at 3-under 277. His ballstriking was so superior he could have easily shot 63 or better, but the senior could not convert numerous birdie putts in the 5 to 12-foot range.

“I left a lot out there which kind of stings when you finish a shot back,” Cummins said. “But you can’t be too upset shooting 66 out here.

“OSU played well enough to beat us. We wanted to win this, but it could be a blessing in disguise. Hopefully it will wake us up a little bit. I’ve never seen a tournament that was this tight all the way through the final round to the last hole. We just didn’t get it done.”

McAllister wound up tied for sixth after his closing 68. Jonathan Brightwell fired a 67 in the final round, but the Sooners also had to count a 3-over 73 by Garret Reband, who battled back from a quadruple bogey 7 on the par-3 second after his tee shot got stuck in a yucca plant in a bunker above the green and took several shots to dislodge. Patrick Welch shot 75 and tied for 25th.

With the victory, Oklahoma State will likely be the No. 1 seed at the regional it is hosting May 16-19 at Karsten Creek in Stillwater. OU’s likely destination is the Albuquerque, N.M., regional to be played at the University of New Mexico course. The NCAA Championship is May 28-June 2 at Grayhawk Golf Club in Scottsdale, Ariz.