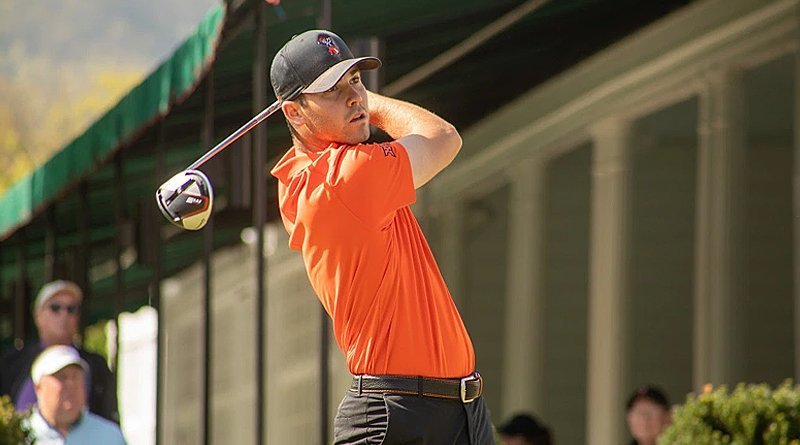 Above: OSU’s Austin Eckroat leads the NCAA Championship
FAYETTEVILLE, Ark. — Oklahoma State’s men’s golf team blistered Blessings Golf Club on Saturday with a 276 during its second round at the NCAA Championship to stretch its lead to 12 shots through 36 holes of play.
The top-ranked Cowboys’ 12-under total put them at 10-under-par 566 and increased their lead by 11 strokes. Stanford finished the day alone in second place at 578 at the par-72, 7,550-yard layout, while Texas A&M was third at 583. Oklahoma jumped from 14th to sixth by shooting 1-under as a team Saturday.
OSU also occupies the top two spots on the individual leaderboard with sophomore Austin Eckroat firing his second consecutive 69 to come in with a 6-under 138 total and a shot clear of classmate Matthew Wolff and Cal’s Collin Morikawa.
Eckroat carded three birdies on his outward nine for a 1-under 35 side and moved to 4-under after a birdie at the 15th before finishing at 3-under for the day.
“I think yesterday’s round helped me today for sure. I did the same things I did in the first round, like making putts, so it helped me shoot low. If I keep hitting it the way I have been and get some putts to fall I’ll shoot low again,” Eckroat said.
Wolff shot up the leaderboard after matching the course record with a 66 to get in with a 139 tally. The sophomore birdied Nos. 4, 5 and 6 before adding another at the ninth to turn in 3-under 33. He then put together a bogey-free inward nine that included birdies at the 11th, 13th and 15th.
“I didn’t have my best round yesterday, but I just hung in there and figured some things out. I was able to minimize some mistakes and close some things out. It’s nice to go out there and post a low score to help out my team,” Wolff said.
Zach Bauchou marched up the leaderboard as well, climbing 12 spots into a tie for ninth place after posting a 1-under 71 for an even-par total of 144.
Junior Viktor Hovland bounced back from an opening 75 with a 2-under 70 to move 20 spots into a tie for 16th place at 145.
Senior Hayden Wood rounded out the OSU starting five with a 77 to stand at 155 and tied for 102nd place.

Jacob Solomon, of Auburn, posted a 3-under 69 positioning him in a tie for fourth place at 4-under-par with Isaiah Salinda from Stanford who carded a 2-under 70 on Saturday. Luke Schniederjans of Georgia Tech shot the second best round of the day firing a 5-under par 67.

Oklahoma State carried a one-shot lead into the second round and was one of the first teams to tee off this morning at 6:50 a.m. The Cowboys took advantage of the cooler, still conditions in the first part of the round to extend the lead.

“We had a really good round today,” said Oklahoma State head coach Alan Bratton. “This is why you play hard all year so you can earn a top seed and get an early tee time. We were out here at 7 a.m., with little to no wind which is a huge advantage out here. This is already a tough course and the wind makes it harder. We took advantage of the lack of wind on the front nine and got some momentum. Our goal is to try to get to know the course better so we’ll get back to it tomorrow and just be ourselves.”

The Cowboys will begin their third round tomorrow at 6:50 a.m. (CST) and will be grouped with Stanford and Texas A&M. Live scoring is available at golfstat.com.
Four members of OSU’s roster were named to the All-Central Region squad it was announced today by the Golf Coaches Association of America. Bauchou, Eckroat, Hovland and Wolff all earned the honor.

The No. 6 Oklahoma men’s golf team moved up the leaderboard on Saturday and is in sixth place through 36 holes with a two-day total of 592 (+16).Entering the day tied for 14th, the Sooners were one of three teams, along with Oklahoma State and Stanford, to finish under par during the morning wave. OU finished with a 287 (-1) during Saturday’s action and the Sooners’ second-round total is tied for the second-lowest round so far at the NCAA Championship.

“I was really proud of our guys played today,” OU head coach Ryan Hybl said. “We need another good day tomorrow like we had today. That’s what we talked about last night. We were only one even-par round away from being in a much better spot and that’s what happened today.”

The top 15 teams and top nine individuals not on those teams after 54 holes of stroke play will move on to compete in one final round of stroke play Monday. Following Monday’s round, the top eight squads will advance to match play competition.

The Sooners are making their ninth consecutive appearance in the tournament and join Illinois and Texas as the only programs to reach the national tournament for nine straight years.

For the second straight day, freshman Patrick Welch shined for the Sooners. The freshman logged OU’s best round of the day by firing a 69 (-3). Welch picked up five birdies and closed the day by playing the final nine holes a 2-under. The Providence, R.I., native is tied for ninth place through 36 holes at even-par 144.

“Patrick’s one of our best ball strikers and it was fun to see him take advantage of the round today and post a really good number,” Hybl said.

Senior Blaine Hale holds a share of 23rd place at 146 (+2) through 36 holes, after posting a 70 (-2) during Saturday’s action. Hale claimed OU’s first eagle at the NCAA Championships on hole No. 5 and carded three birdies.

Senior Brad Dalke is tied for 59th place with a two-round 150 (+6). Dalke carded a 74 (+2) in the second round and took advantage of the course’s four par-3’s by making birdies on all four holes.

Redshirt junior Quade Cummins holds a share of 86th place at 153 (+9). The Weatherford, Okla., native posted a 74 (+2) on Saturday and logged four birdies.

Junior Garett Reband recorded a 75 (+3) and is tied for 93rd place with a two-round 154 (+10). Reband started the day strong by picking up three birdies through the first eight holes, but three double bogeys late in the day slowed his momentum down the stretch.

OU will be paired with Auburn and Texas for Sunday’s third round. The teams will tee off at 7:12 a.m. from hole No. 10. Live scoring is available onGolfStat.com<http://results.golfstat.com/public/leaderboards/gsnav.cfm?pg=participants&tid=17527>.

Additionally, Cummins, Hale, Reband and Riley Casey were named to the GCAA Division I PING All-Region Team on Saturday. The Sooners were one of three teams to have four players selected to the Central All-Regional Team.