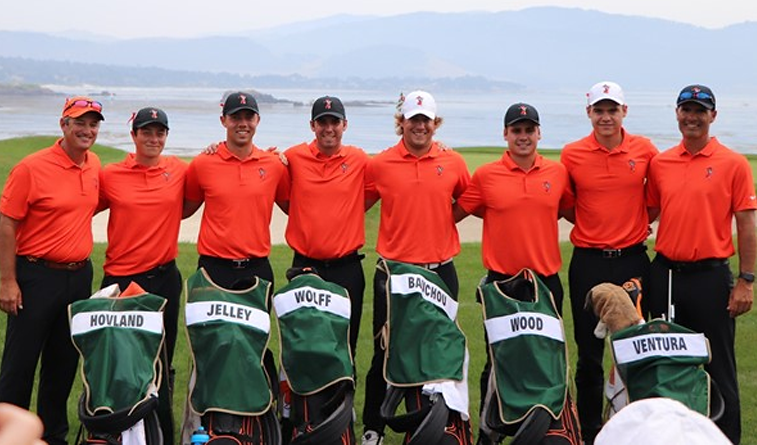 PEBBLE BEACH, Calif. – Oklahoma State’s men’s golf team rolled to victory in its season opener on Sunday, tallying a 14-shot triumph to win The Carmel Cup for the third year in a row at Pebble Beach Golf Links.

OSU entered the day with a three-shot cushion before having all six players in the starting lineup post a closing score in the 60s en route to a 20-under final round.

OSU junior Hayden Wood closed with a bogey-free 66 to finish in a tie for the top spot in the individual race with Tech’s Hurly Long. The duo finished with matching totals of 19-under 197, forcing a playoff. Long would go on to earn the victory on the first extra hole.

In addition to his runner-up finish, Wood’s tally was good for the sixth-best 54-hole total in school history and was just two strokes shy of matching the school mark held by three players.

Senior Kristoffer Ventura posted a 68 during his third round to finish in a tie for fourth place at 12-under 204.

Junior Zach Bauchou’s 68 tied him for 11th place at 208, while senior Brendon Jelley closed with a 69 to finish a stroke back at 209 and tied for 13th place.

Freshman Matthew Wolff closed out his first collegiate event with a 69 to tie for 15th place at 210.

Sophomore Viktor Hovland rounded out the lineup with a 69 of his own to finish at 213 and tied for 23rd place.

The Sooners shot a 13-under 347 in Sunday’s final round, posting a three-round total of 1047 (-33). Each team competed with six golfers, counting the low five scores towards the team total each round.

“We did a really nice job this week closing out each round and that was huge positive for us,” OU head coach Ryan Hybl said. “(Garett) Reband played so great all week and I’m proud of him for stepping up the way he did.”

Sophomore Garett Reband continued his strong play by claiming third place with an overall 13-under 203, his best 54-hole total as a Sooner. Reband’s third-place finish was also the best of his OU career. To earn his first top-5 finish of his career, Reband posted a 68 during the final round. The sophomore started his round with an eagle on No. 2 and closed the tournament by carding four birdies.

Senior Grant Hirschman finished in a tie for eighth place at 206. Hirschman posted a 69 on Sunday, closing out his round with an eagle on No. 18. The senior has 14 top-10 finishes as a Sooner.

Junior Brad Dalke rebounded during Sunday’s final round with a 68 to finish at 208, tying for 11th place. Dalke carded a bogey-free round to earn his 11th top top-20 finish of his career.

“Grant and Brad both had really nice weekends and I expect them to get going next week in Minnesota,” Hybl said. “All in all, this was a great start to the year and now it’s time to figure out where we need to get better before next week.”

The Sooners return to action Sept. 10-11 (Sunday-Monday) when they look to defend their back-to-back titles at the Gopher Invitational. The two-day tournament will be played at Windsong Farm Golf Club in Independence, Minn.