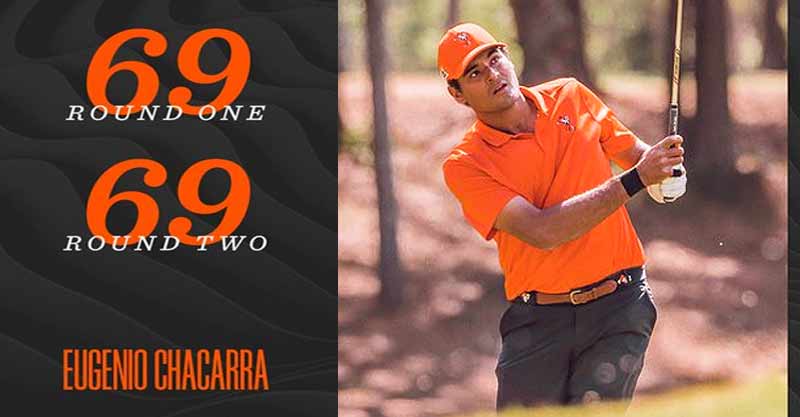 COLUMBUS, Ohio – Oklahoma State’s men’s golf team posted a 281 during its second round at the NCAA Columbus Regional on Tuesday to share first place at Ohio State’s Scarlet Course.

The second-ranked Cowboys entered the day with a six-shot lead before carding their 3-under round to stand at 7-under 561. Georgia Tech fired a 13-under 271 at the par-71, 7,422-yard layout to move to the top spot on the leaderboard.

Senior Eugenio Chacarra carded his second consecutive 69 to move into the top spot in the individual race at 4-under 138. Chacarra birdied the second before carding consecutive bogeys at the fifth and sixth. He would move back to level with a birdie at the ninth. Chacarra put together a bogey-free inward nine with birdies at Nos. 12 and 18 to gain the top spot.

Sophomore Jonas Baumgartner followed an opening 71 with a 1-under 70 to move up two spots into a tie for sixth place at 141.

Senior Aman Gupta also finished among the group at 141 after carding a 71 during his second round.

Junior Brian Stark also bettered his opening round by a stroke, carding a 71 to stand at 143 and tied for 14th place.

The Cowboys will begin their final round tomorrow at 7:00 a.m. (EST) and will be grouped with Georgia Tech and Ohio State. Live scoring is available at golfstat.com.