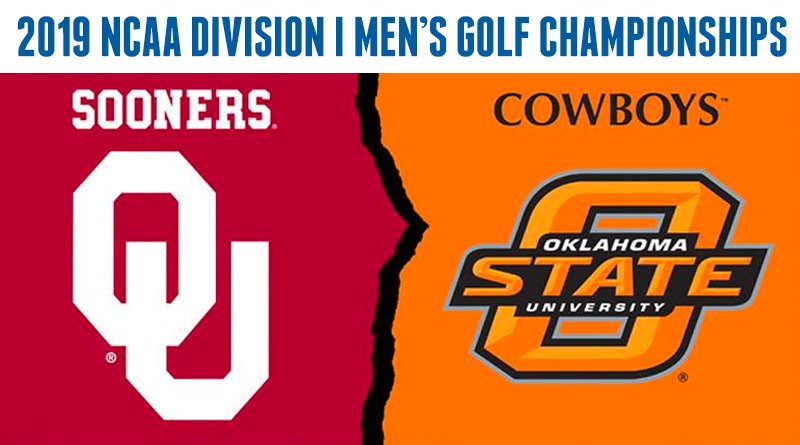 FAYETTEVILLE, Ark. – Practice rounds have begun for the 2019 NCAA Division I Men’s Golf Championships at Blessings Golf Club, a par 72, 7,550-yard course in Fayetteville, Arkansas. The tournament, hosted by the University of Arkansas, features 30 teams and six individuals who advanced to the championships from six regional sites last week.

Oklahoma State will be vying for consecutive national championships for the first time in its proud history, while Oklahoma will look to regain the championship it won in 2017.

Finals play consists of three days of stroke play on Friday, May 24 thru Sunday, May 26 (54 holes), after which the top 15 teams and nine individuals not on an advancing team will be determined. That is followed by a final day of 18 holes of stroke play on Monday, May 27 to determine the top eight teams that will advance to match play as well as the 72-hole individual champion. The team national champion will be determined by a match-play format that will consist of quarterfinals and semifinals conducted on Tuesday, May 28, followed by finals on Wednesday, May 29.

GOLF Channel will provide extensive coverage of the 2019 NCAA Division I Men’s Golf Championships.  Live coverage begins on Monday, May 27 from 3-7 p.m. featuring the final round of stroke play and the awarding of the individual medalist honors. Coverage continues on Tuesday, May 28, from 10 a.m.-12:30 p.m. with the quarterfinals of match play and returns for the match play semifinals from 3-7 p.m.  Coverage culminates with the championship match on Wednesday, May 29 from 3-7 p.m. (All times are CT).

Parking and admission to the championships at Blessings Golf Club are free.

For more men’s golf information and to follow the action, access https://www.ncaa.com/sports/golf-men/d1.  For the complete schedule, links to live scoring, pairings and websites of participating teams, go to ncaagolf19.com.

The top-seeded Cowboys will begin play on Friday at 12:10 p.m. and will be grouped with Arizona State and Wake Forest on the 10th tee. The trio will begin its second round on Saturday off No. 1 at 6:50 a.m.

The Sooners’ lineup for the NCAA Championship will include seniors Brad Dalke and Hale, juniors Quade Cummins and Garett Reband along with freshman Patrick Welch. Freshman Logan McAllister will serve as the team’s alternate.

OU’S NCAA CHAMPIONSHIP HISTORY
This season marks the ninth consecutive season the Sooners have advanced to the NCAA Championships and the program’s 40th all-time appearance. The Sooners won the national title in 1989 and 2017. OU has had two individual champions, Walter Emery (1933) and Jimmy Vickers (1952).

In 2018, the Sooners advanced to the match play quarterfinals at Karsten Creek Golf Club in Stillwater, Okla. OU has appeared in the match play portion of the NCAA Championships in each of the last three seasons, the only team to accomplish that feat.

LIVE STATS
Live scoring will be available on GolfStat.com<http://golfstat.com