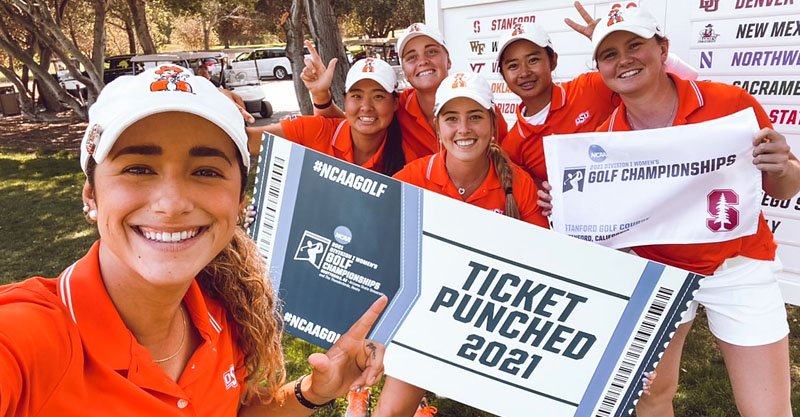 STANFORD, Calif – The Oklahoma State women’s golf team punched their ticket to the NCAA Championships with a third-place finish at the NCAA Regional in Stanford, California.

Oklahoma State finished 3-over 855 and in third place behind Wake Forest and Stanford.

The Cowgirls will be making their 22nd program appearance at the NCAA Championships and first under second-year head coach Greg Robertson.

Maja Stark finished in third place at 7-under 206. She led the field on par 5 holes and notched 15 birdies, the second-most amongst the competition.

Isabella Fierro recorded a 2-over 215 and finished in a tie for 18th place.

Freshman Rina Tatematsu finished 3-over 216 and in a tie for 24th place. She was second amongst the competition on par-5 holes and recorded an eagle in the second round.

Lianna Bailey and Maddison Hinson-Tolchard finished in a tie for 45th and 93rd place respectively.

The Cowgirls will compete in the NCAA Women’s Golf Championship in Scottsdale, Arizona on May 21-26.

COLUMBUS, Ohio – The Oklahoma women’s golf team’s season came to a close on Wednesday as the Sooners finished in seventh at the NCAA Columbus Regional, one spot and three strokes shy of advancing to the NCAA Championship.

The Sooners (7th, 888) entered the day five strokes back of sixth, as the top six teams advance from each regional location, but were nine shots back when they made the turn on Wednesday. Oklahoma mounted a furious comeback over the final nine holes, even tying fifth-place Kent State late in the round, but the Golden Flashes went 2-under-par over the last three holes to eliminate the Sooners.

“It’s heartbreaking,” 12th-year head coach Veronique Drouin-Luttrell said. “Everyone worked so hard all season long and for it to end like this is really tough. We challenged everyone today to step up and play well, and we did that, but it just wasn’t quite enough. I’m proud of everyone for fighting until the bitter end. Regionals is tough, it can be a really happy ending or it can be absolutely heartbreaking, and this was definitely a tough one.”

Oklahoma led the field on Monday after firing a 2-under 286, and the team’s round of 290 (+2) on Wednesday was tied for the third-lowest on the day. But a moving-day score of 312 (+24) on Tuesday proved too much for the Sooners to overcome.

“We knew we needed to play well today to give ourselves a chance,” Drouin-Luttrell said. “After what we shot yesterday, we knew that we had an uphill battle to fight, and I thought our team did everything that we asked them to. Hats off to all of the teams that finished inside the top six, this was not an easy golf course and they made some putts in really high-pressure moments.”

Hannah Screen (T13, +4) notched her team-high 10th round in the 60s on the season by firing a bogey-free 69 (-3) on Wednesday to help give OU a chance. The junior’s season ends as one of the best in program history as her scoring average of 71.67 is the second-lowest ever for a Sooner. The London, England, product led Oklahoma at six of the team’s eight tournaments in 2020-21.

Kaitlin Milligan (T13, +4) closed her illustrious career as a Sooner on Wednesday with a 1-over 73 to finish the Regional at 4-over-par and tied with Screen for 13th. The senior leaves Norman with the single-season scoring average record of 71.40 and score-versus-par record of -0.30, both set in her junior season. She owns program records for the low-single round (62) and low-54 hole score (199), both posted at the 2019 Westbrook Invitational.

Milligan and Screen both finished one shot away from forcing a playoff to determine the low-three individuals not on qualifying teams to advance to the NCAA Championship.

Junior Libby Winans posted a 73 (+1) in the final round to share 29th with teammate Mikhaela Fortuna at 8-over-par for the tournament. Winans’ carded an early pair of birdies to keep the deficit manageable on the front nine, and then her birdie on the 13th hole jumpstart the Sooners comeback.

Fortuna (T29, +8) closes her shortened-junior season with a scoring average of 72.50 over 12 rounds, which would be suitable for the eighth-lowest in OU history if she met the minimum number of rounds threshold. The junior from Manila led the Sooners twice this spring and will help guide the Sooners to a strong 2021-22 campaign.

As a team, the Sooners close the season with a scoring average of 289.42, good for second-lowest in the Oklahoma annals. The top 12 season scoring averages have all come in the Drouin-Luttrell era.

“This team is phenomenal statistically,” Drouin-Luttrell said. “We’ve had a really, really good season overall. Every single individual on this team worked so hard to get us where we’ve been.”

Oklahoma now shifts into the offseason and is set to welcome back six of the nine players as Milligan, Ellen Secor and Hannah Lee are set to graduate. Drouin-Luttrell and assistant coach Ryan Sirman will welcome in Meagan Winans, who finished as the runner-up at the 6A UIL State Championship this week and is an AJGA All-American.

“Those three seniors came in and took a chance on our program,” the Sooner head coach added. “They’ve all really stepped up and rewrote the record book. They’re all going to leave their own legacy here in Norman and this senior class has been so special and we’ll miss every one of them.”