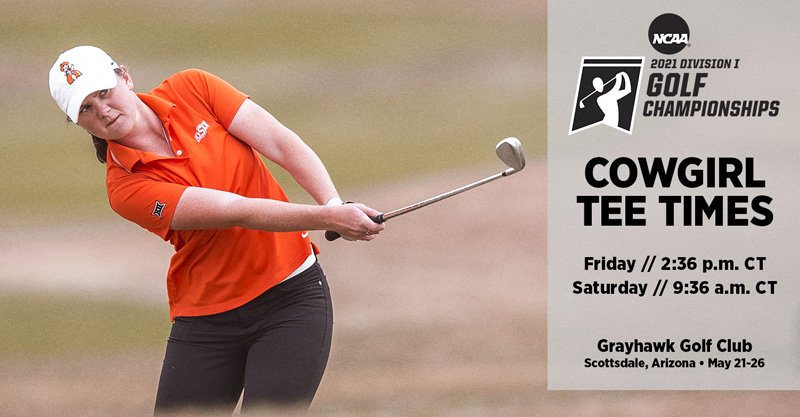 The Big 12 champion Oklahoma State Cowgirls are headed back to the NCAA Women’s Golf Championships, which are being held at Grayhawk Golf Club in Scottsdale, Arizona. Winners of five events so far in 2020-21, OSU is ranked No. 7 by both GolfStat and Golfweek, and has finished no lower than third in any event in the spring. According to Golfweek, OSU owns a 100-14 record against top-100 competition this season, including a 17-8 mark against the top-25. The Cowgirls feature four players ranked No. 84 or better by GolfStat, including No. 4 Maja Stark and No. 20 Isabella Fierro.

Cowgirls At Nationals
Oklahoma State is making its 22nd appearance at the NCAA Championships, which is tied for the 10th most among all schools nationwide, and second only to Texas among Big 12 programs. This is OSU’s first appearance at nationals since an 11th place finish in 2016. The Cowgirls own six top-5 finishes at NCAAs, including a runner-up finish in 2004. OSU also logged third-place finishes in 1982 and 1989, as well as fourth-place in 2009. Caroline Hedwall won the individual national championship in 2010 after carding rounds of 70-70-68-68 at the Country Club of Landfall.

ANNIKA Award Final 10
Cowgirl sophomore Maja Stark was listed among the 10 semifinalist for the ANNIKA Award, given annually to the top female collegiate golfer in the country. Stark is the first Cowgirl to be named to the final watch list for the ANNIKA. A two-time winner in 2021, Stark is currently ranked the No. 4 player in the country by GolfStat and she is listed at No. 6 in the World Amateur Golf Rankings. Her scoring average of 70.22 (-1.67 to par) is the best in school history, as is her par-3 scoring average of 2.98. Stark owns a head-to-head record of 10-2 against top-25 opponents and that mark jumps to 49-2 against top-100 foes. At 124 birdies on the year, she needs just nine more to break Linnea Johansson’s school record set back in 2015-16.

Medalist Mania
Four members of Oklahoma State’s starting five have won at least one collegiate tournament during their career, including a trio of winners in 2020-21. Maja Stark (2 wins), Lianna Bailey (2 wins) and Rina Tatematsu (1 win) have all earned medalist honors this season, while Isabella Fierro won an event during her All-American freshman campaign of 2019-20.