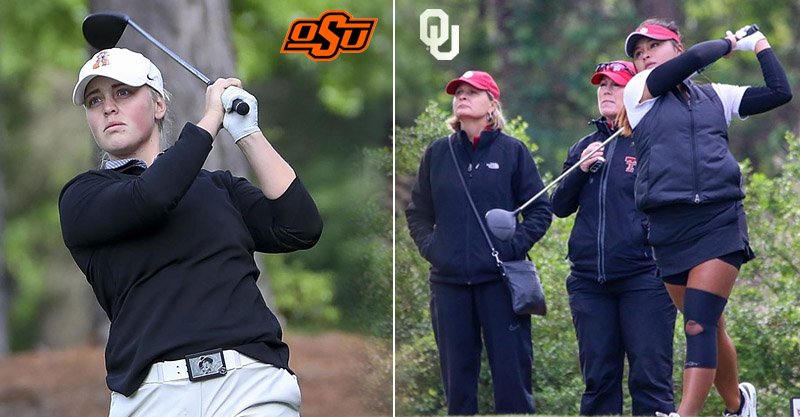 THE WOODLANDS, Texas – The quest for a 10th Big 12 Championship got off to a roaring start for the Oklahoma State women’s golf team. After 18 holes, the Cowgirls lead the field by four strokes and four OSU golfers are within four shots of the individual lead at The Club at Carlton Woods.

The Oklahoma Sooners were in fourth place after the first round at 1-under, eight shots behind the Cowgirls.

Oklahoma State carded a 9-under 279, which is the team’s second lowest round of the season and tied for the 13th lowest round in school history. OSU was a combined 10-under on par-4 and par-5 holes and led the field with 21 birdies.

Maja Stark recorded her fourth consecutive round in the 60s and is just three strokes off the lead behind Gurleen Kaur of Baylor. The Cowgirl sophomore racked up four birdies to end the first day at 3-under 69.

Three other Cowgirls – Isabella Fierro, Lianna Bailey and Rina Tatematsu – posted rounds of 2-under 70 and are tied for 5th heading into Monday’s round. Han-Hsuan Yu is tied for 13th at even par after four birdies and a solid back-9.

Oklahoma State owns 23 conference championships, including nine Big 12 titles – three more than any other league foe. Monday’s second round will begin at 10 a.m. for Oklahoma State, and live scoring can be found at GolfStat.com.

Mikhaela Fortuna, Hannah Screen and Kaitlin Milligan own OU’s three par-or-better rounds after Sunday afternoon. All will have an opportunity to set career-bests at the conference championship with strong rounds on Monday and Tuesday. The three powered OU (-1, T4) to its best round at the Big 12 Championship since 2016, as the Sooners tallied a 287.

“Really proud of the team and how they performed today,” head coach Veronique Drouin-Luttrell said after the round. “We battled some tough conditions on the back nine and found a way to get back in the red. We proved to ourselves that we can compete with the best, and we look forward to the rest of the tournament.”

Fortuna shares second after firing a 69 to lead the Sooners. The Manila, Philippines, native sits three shots off the leader, Gurleen Kaur of Baylor, despite matching Kaur for a field-high six birdies.

Screen (-2, T5) shined in her Big 12 Championship debut, collecting a team-high 14 pars paired with three birdies and a bogey to finish at 2-under for the day. For the London, England, product, her opening-round score is her team-best 11th par-or-better round of the year.

Milligan (E, T13) carded the second-lowest round at the Big 12 Championship of her career, amassing three birdies and bogeys to finish even on the afternoon. The Norman product’s 70 matched a season-low, previously scored in the final round of the Betsy Rawls Invitational.

Libby Winans (+4, T39) closed her day strong with a birdie to move into a tie for 39th and sits three shots out of the top 25. Trailing Winans by a stroke was sophomore Maria Fernanda Martinez, whose 5-over 77 gave her a share of 41st heading into the second day.

Spectators are permitted at Carlton Woods based on local/state guidelines, which are subject to change. It is requested that spectators wear masks at all times and follow physical distancing protocols, including remaining at least 15 yards away from student-athletes, coaches and other team personnel. Spectators must also keep distanced from tee boxes and greens. The event is free of charge.