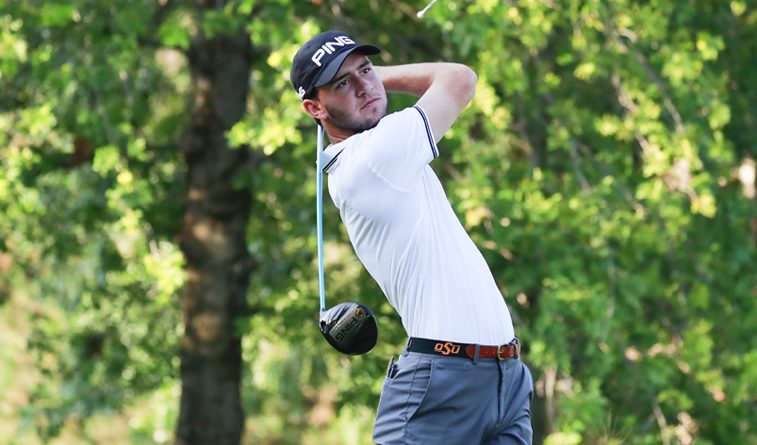 Austin Eckroat, 18, turned in another bogey-free round Wednesday, advancing to the second round of match play in the 2017 U.S. Junior Amateur Championship at the par-71, 7,049-yard Flint Hills National Golf Club. Eckroat, the medalist by two strokes, defeated Skyler Eubank, 17, of Meridian, Idaho, 5 and 3, in the Round of 64.

Also advancing were Logan McAllister and Matthew Wolff. McAllister, who has one more year of high school golf before him at Christian Heritage Academy in Oklahoma City before going to the University of Oklahoma, edged Kaiwen Liu of the People’s Republic of China 2 and 1.

Wolff, an OSU incoming freshman from Agoura Hills, Calif., posted a 3 and 1 victory over Remington Hirano of Honolulu, Hawaii.

Eckroat, who equaled the championship’s stroke-play record with a 36-hole score of 10-under-par 132, took a 2-up lead with a birdie on the drivable 321-yard, par-4 sixth. He closed out the match with birdies on holes 14 and 15. He hit a 7-iron to within 20 feet on the par-3 14th and struck a three-quarter pitching wedge to close range that resulted in a conceded putt on the par-4 15th.

“Today was more like the first day [of stroke play] on the ball-striking,” said Eckroat, whose opponent reached the 64-player match-play bracket after making a birdie on the third extra hole in a 10-for-1 playoff Tuesday evening. “I didn’t make anything really, but I was hitting it well enough to where I didn’t need to make all those putts.”

The U.S. Junior Amateur continues with the second and third rounds of match play on Thursday. The quarterfinal and semifinal rounds will be played Friday. The championship concludes with a 36-hole final on Saturday, starting at 7 a.m. CDT. Fox Sports 1 (FS1) will provide coverage all three days.

Eckroat, who reached the Round of 16 in last year’s Junior Amateur at The Honors Course and won his second Oklahoma Class 6A state high school championship this year, acknowledged some pressure heading into his first-round match.

“I did, just knowing that I’m expected to play well again,” said Eckroat, who has not posted a bogey in 51 holes played this week. “It’s a little different feeling, but it’s the opposite, too. I know I am playing really well.”

Defending champion Min Woo Lee, 18, of Australia, was not as fortunate, losing to Noah Norton, 18, of Chico, Calif., in the first round, 2 and 1. Norton, the runner-up in this year’s California State Amateur, won four consecutive holes on the outward nine and never trailed thereafter.

“I was kind of bummed when we had to play each other,” said Norton, who reached the Round of 64 in last year’s Junior Amateur. “It’s a match you don’t want to have in the first round, because he’s a great player.”

Lee, who was attempting to become the third player to win multiple U.S. Junior Amateurs, took an early 2-up advantage before Norton’s decisive run. Norton maintained his lead with a birdie on No. 12 before ending the match with a winning par on No. 17.

“Pretty disappointed,” said Lee, who became the fourth international Junior Amateur champion last year. “I didn’t lose to a bad player. I just didn’t produce shots when I needed to.”

Kwak, a rising junior at Kamiak High School who lived in Korea for eight years, made an extraordinary winning par on the final hole, a 491-yard par 5. He sent his tee shot into the right woods, punched out, hit a 210-yard hybrid to just off the right side of green and two-putted from 55 feet.

“I was hoping it [the first putt] would stop,” he said. “I was lucky the greens were slow, because I am not very good with fast greens.”

Kwak held an early 3-up lead before Mancheno, who set the course record with an 8-under 63 in the first round of stroke play, rallied to go in front on the inward nine. But Kwak squared the match on No. 16 when he curled in a big, breaking 20-foot birdie putt from the back of the green.

Giantsopoulos went ahead in his match with a two-putt par on No. 14 after Pak pulled his tee shot that led to a bogey. Giantsopoulos later sank a 20-foot downhill birdie putt on the par-4 16th for a 2-up lead. Pak, who advanced to match play for the fourth consecutive year and was a semifinalist in 2016, tried to be aggressive off the tee on the next hole but hit it into the water hazard.

“I kept it on the course,” said Giantsopoulos, who listed a runner-up finish in the Ontario Provincial Championship as his previous biggest accomplishment. “I didn’t make too many mistakes off the tee. My putting just really came through today.”

Cole Ponich, the No. 3 seed, and Joshua Armstrong, the No. 5 seed, each advanced in tightly contested matches. Ponich, 17, of Salt Lake City, Utah, won the 17th hole with par en route to a 1-up victory over Alex Jamieson, 18, of Duxbury, Mass. Armstrong, 18, of Australia, made a 15-foot birdie putt to win in 19 holes against Colin Bowles, 17, of Albany, Ga.

Cole Hammer, 17, of Houston, Texas, moved past the first round of match play for the third year in a row, recording a 4-and-3 victory over George McNeely, 16, of Carmel, Calif. Hammer built an early lead, slowed in the middle of the match, but then wrapped things up with birdies on holes 12 and 15. He hit a punch-cut 5-iron to within 6 feet on the par-4 12th and delivered a 9-iron to within 8 feet on No. 15.

“It’s so important to stay focused on the shot you’re hitting because if you get ahead of yourself, stuff can get going out of whack,” said Hammer, who competed in the 2015 U.S. Open at Chambers Bay. “And that’s kind of what I’ve had trouble with the last couple of years.”

Last year’s U.S. Junior Amateur runner-up, Noah Goodwin, 17, of Corinth, Texas, advanced to the second round with a 3-and-2 triumph over Dylan Fritz, 15, of Las Vegas, Nev. Goodwin won two of the last four holes with birdies. Eugene Hong, 17, of Orlando, Fla., had his string of playing in two consecutive semifinals halted. Hong, the No. 6 seed, was defeated, 2 and 1, by Ryan Hall, 17, of Knoxville, Tenn.

Hometown favorite Wells Padgett, 18, of Wichita, Kan., came from 3 down with three holes to play before losing to Ryan Smith, 15, of Carlsbad, Calif., in 22 holes, the longest match of the day.

*Round of 32 winners advance to the third round of match play on Thursday, beginning at Noon.