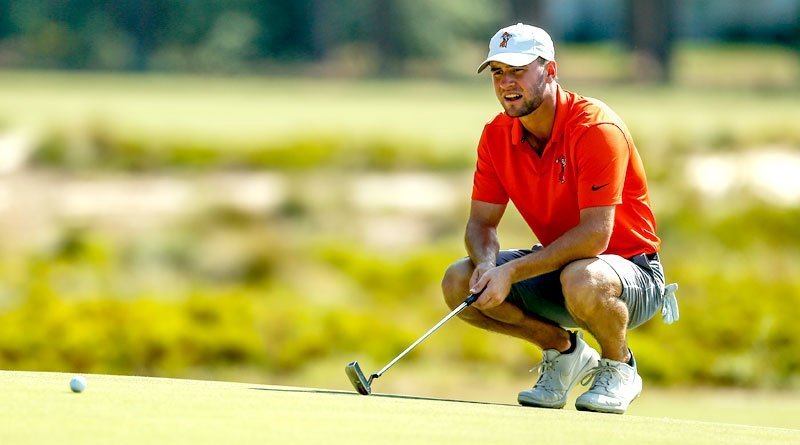 Austin Eckroat of Edmond birdied two of his final four holes on the No. 4 Course at Pinehurst Resort to move from outside the cut line into a tie for 44th, one shot inside and safely advance to match play at the 119th U.S. Amateur Championship Tuesday. Eckroat finished at 4-over for his 36 holes on No. 2 and No. 4.

A triple bogey on the par-3 11th (his third hole) put Eckroat outside the cut line and he was at 5-over for the round after a bogey on the second hole (his 12th). He was on the green on the fourth hole when the rain delay came. When he returned, he two-putted for par there, then birdied holes 5 and 6 and left birdie putts on the lip on holes 7 and 8, his final two holes.

He joins former University of Oklahoma golfer Brad Dalke of Norman as the two golfers with Oklahoma ties to survive the 36-hole cut. Dalke followed his 3-under opening round on No. 4 with a 5-over 75 on No. 2 Tuesday to finish at 2-over and tied for 19th. Dalke, the 2016 runnerup in this event, made six bogeys on his front nine but rallied with three consecutive birdies on holes 12-14. He finished with four birdies, five pars and nine bogeys.

Match play pairings will be finalized as soon as the weather-delayed second round is completed Wednesday morning. There were 27 golfers competing for the final three spots in match play in a playoff, including Oklahoma State freshman Brian Stark, who shot a 3-under 67 on No. 4 after opening with a 78 on No. 2. Stark bogeyed the first hole of the playoff and did not advance.

Eckroat drew Julien Sale of France in a first-round match that begins at 11:20 CDT. Dalke will play Sandy Scott of Scotland at 1:20 CDT.

Wu, who helped Stanford University to the 2019 NCAA team championship in May, had flown overnight from Lima, Peru, to Pinehurst after helping the USA capture the mixed-team title in the Pan American Games on Sunday, along with fellow U.S. Amateur competitor Stewart Hagestad. His Monday round of 65 broke the competitive course record on Course No. 4 at Pinehurst, which reopened in 2018 after a renovation by course architect Gil Hanse.

On Tuesday morning on Pinehurst’s renowned Course No. 2, which is playing more than 3 shots tougher by stroke average than No. 4, Wu made 16 pars and two bogeys to back up his Monday effort, which was accomplished without benefit of the practice rounds most other players had on Saturday and Sunday.

“Towards the back nine today was definitely tough, just because No. 2 is such a mental grind, as well,” said Wu, who received his Stanford diploma in June, just after completing the U.S. Open at Pebble Beach, where he tied for 35th place. “You’re trying to hit perfect shots on every hole just to maybe have a look at birdie, so that was kind of wearing down, and it was getting hot towards the end, too. Luckily I was able to finish it off, but I was definitely pretty tired.”

Wu’s 3-under 137 total was one better than six players, all of whom completed their rounds. The second round of stroke play was delayed by 1 hour, 21 minutes in the late afternoon, which kept 50 players from finishing their rounds. The second round will resume on Wednesday morning at 7:20 a.m., with players jockeying for position to advance in the championship. A total of 66 players were at 4 over or better as those remaining players seek to lock in spots in the 64-player match play field. The closest player to Wu who had not completed play was Spencer Ralston, of Gainesville, Ga., at 1 over with two holes to play.

Karl Vilips, 17, of Australia, who is competing in his third U.S. Amateur, improved by 12 strokes from Monday to Tuesday, shooting a bogey-free, 5-under 65 on Course No. 4 after a 7-over 77 on Monday. Vilips completed two rounds at 2-over 142 and easily qualified for match play.

The past two U.S. Junior Amateur champions both failed to make match play. Reigning champion Preston Summerhays, who won last month at Inverness, shot 77-73 to finish at 10-over 150, while 2018 champion Michael Thorbjornsen shot 69-78 to finish at 7-over 147. Akshay Bhatia, of Wake Forest, N.C., who was runner-up to Thorbjornsen last year and is No. 5 in the World Amateur Golf Ranking, is likely to make match play after rounds of 72-72.